Mapping between camera pose and image features in visual servoing

I have a robotic arm and a camera in eye-in-hand configuration. I know that there is a relationship between the body velocity $V$ of the camera and the velocities $\dot s$ in the image feature space that is $\dot s=L(z,s) V$ where $L$ is the interaction matrix. I was wondering if one can find a mapping (a so called diffeomorphism) that connects the image features' vector $s$ with the camera pose $X$. All I was able to find is that it is possible to do that in a structured environment which I don't fully understand what it is. 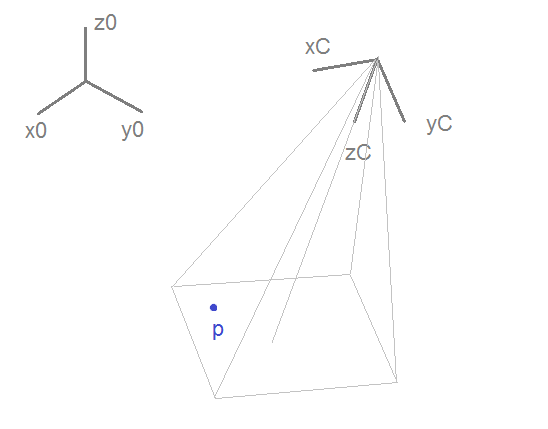 The camera has a particular field of view (shown with a pyramid in the image), which relates the pixels coordinates to the relative position of the feature in the camera reference frame, $\tilde{p}$, through the camera projection matrix:

Where $R_C$ is the rotation matrix defining the camera orientation and $p_C$ is the position of the camera.

One thing I have not discussed is lens distortion, which must be accounted for before using this approach but can be treated separately. Note that the OpenCV Camera Calibration and 3D Reconstruction page provides a more detailed explanation.

Look up Camera Space Manipulation, which uses the pinhole camera model to map image space and physical space coordinates. It is not too difficult to do.

A structured environment is one in which objects which occupy the environment are known, and can be modelled. It is much easier to program mobility, and to identify objects, in a structured environment. For example, if you know that a particular circular object has a given diameter, you can use that object's elliptical shape in camera space to determine viewing angle, and dimensions to determine distance between the circle and the camera. But if you don't know the model of that object, you can't be sure if it is a circle viewed from an angle, or an ellipse viewed head-on. Therefore unstructured environments are much more difficult for relating camera space coordinates and physical coordinates.

2
How to implement the Wavefront algorithm?
1
Simulation environment for conducting visual servoing experiment
5
Image Based Visual Servoing algorithm in MATLAB
1
Visual servoing - tracking a point
4
How to produce a continuous variation of a discontinuous function?
3
3D mapping using only a 2D Lidar
2
Position vs Image based visual servoing?
1
UR5 Visual servoing(image based, eye in hand)