I am reading the paper

There is one paragraph about IMU model. 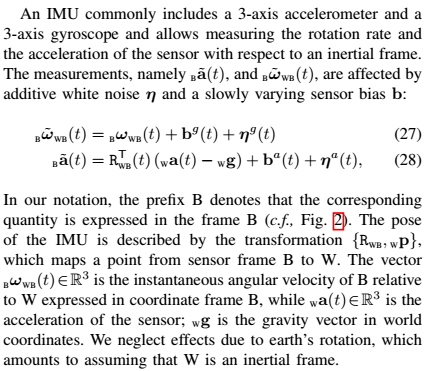 I have two questions.

The second one: The vector(the second quantity from the first equation) is the instantaneous angular velocity of B relative to W expressed in coordinate frame B. The sentence is difficult for me, especially the highlighted part.

1) An inertial frame is one in which a free particle travels in a straight line at constant speed, or is at rest. Practically speaking, you usually check if a frame is inertial or not by characterizing its motion w.r.t a reference inertial frame: all inertial frames are in a state of constant, rectilinear motion w.r.t one another. In the context of visual-inertial odometry, your typical inertial frame is a local 'world' frame (W) attached to the surface of the earth where you are doing your experiment. (Note that it is only inertial because you neglect effects due to earth's rotation.)

2) Your text is missing the attached 'figure 2' but we can guess that frame 'B' is attached to your IMU. In 3D, the rotation motion of a body (B) w.r.t to a fixed frame (W) can be characterized at any instant t by an instantaneous axis of rotation, which is a vector. This is a consequence of Euler's rotation theorem. To compute this vector, see this link. Finally, this vector is obviously expressed differently in (B) and (W) since the two frames are rotated w.r.t one another: the vector will have different coordinates in both. Hence the addition of 'expressed in coordinate frame B'.