How to detect writing on a chalkboard? [closed]

I've got an idea for a simple robot (with an Arduino or something similar) that will play noughts-and-crosses (aka tic-tac-toe) on a chalkboard, so that kids can play against it.

It will use a couple of servos to move an articulated arm holding a piece of chalk which will draw the O's and X's. Then the opponent will draw an O or X and press a button to tell the robot to make the next move.

The tricky bit is: how will the robot know where the opponent made their mark? I could use a camera and some sort of motion detection software, but that sounds complex.

I was wondering if there's a way to detect the touch of the chalk on the board, perhaps using something like a MTCH101 chip -- one per square on the board. The board will have a wooden wipe-clean surface, but chips could be embedded just under the surface.

Does anyone have any suggestions?

Edit 4 Jan 2018: Perhaps a force sensitive resistor would work -- such as http://www.trossenrobotics.com/store/p/6496-1-5-Inch-Force-Sensing-Resistor-FSR.aspx

Since you are going to have a mechanism that can draw within a square why not put a light sensor on it and use the same mechanism scan for the opponent's move?

This Color Sensor from adafruit works well and uses I2C so it is very easy to use with Arduino. It has a white LED light you can turn on to improve reflective readings. 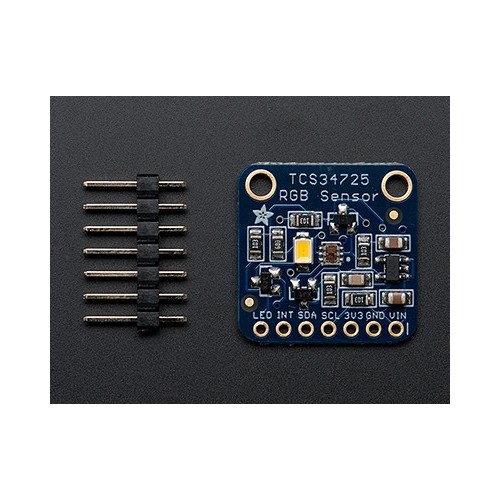 Adafruit also has a lot of other options if this one doesn't work for you. There are also sensors like the TCS3200 that have more lights; but, some don't support I2C and may be be more difficult to use.

You can set a fixed camera points towards the chalkboard to check the content in every cell. This can be done by simply crop the image taken by the camera.

Ok I'm going to pitch another answer with a different take :).

Why not have the user tell the robot where they wrote their X or O?

Make an arm with the servo motors you have as you have already planned to do. For the player to make its move, make it grab the end effector of your arm holding the chalk and write down the X or O. Now, the robot can memorise the movement it has done through its encoders, while writing the user's answer on the board, with the user. Thus it can figure out where the user drew their symbol. Then, just memorise where the robots own answers are and you can play tic-tac-toe.

I believe it would be quite fun to grab the robot arm to directly write on the board and then see the robot answer by itself :).

Not the answer you're looking for? Browse other questions tagged sensors pose beginner force-sensor or ask your own question.

16
How does a six-axis force/torque sensor work?
11
How can I detect the edge of a table?
16
How to detect when a stepper motor has stalled?
5
How do ultrasonic range finders detect objects at an angle?
2
Detect polyethylene
3
How can I detect ground collision, for an hexapod robot?
0
Detect physical touch/hit
1
Is easier to detect a large or a small marker? (Aruco / Apriltags)