I am new to this space and the field. Please pardon my lack of intuition or knowledge. I have a recording stand with a join in between. a pair of screws through which the whole apparatus pivots like a hand. I am trying to convert into a robotic hand 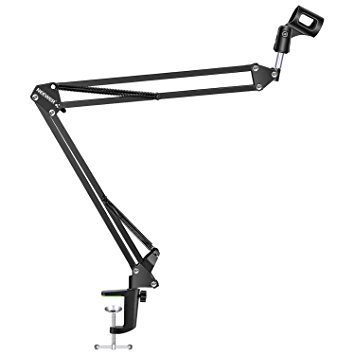 I am trying to add a servo motor at the joint such that the whole apparatus can adjust its height accordingly. My question is, how can I replace the screw area with the screws with a motor. I have MG995 Towerpro servo motor but I am not sure, how to connect the two things together. Please help! 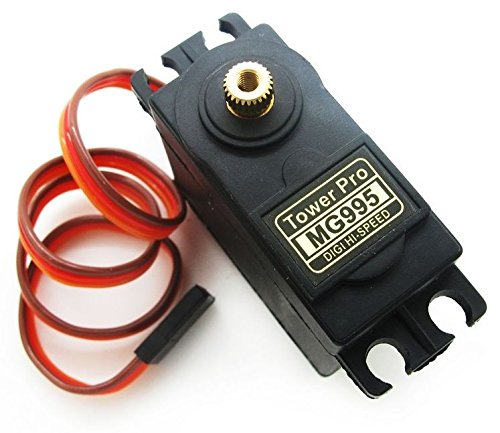 You are best off using the servo's horn/hub (the plastic or metal disk or arm that you attach to the servo), and screwing the arm to the hub. You get buy some larger horns for fairly cheap, and that will make it easier.

If you really want to try attaching the servo through an existing screw hole, the easiest way is to unscrew one of the screws, drill out the hole so it's large enough, stick the servo spindle into the hole, and add some solder to hold the spindle to the arm. You'll also need to screw the servo to the joint piece, otherwise the servo casing will spin rather than the arm. This is a rather permanent and destructive approach (and you really need to be careful with the solder), but honestly the time required to properly machine the arm and set it all up so you can remove the servo later is a lot more of a commitment than the $40 you'd spend on the arm and servo. The hard part of such a 'proper' approach is getting the servo spindle to fit the hole perfectly. That's why I recommend using a large hub instead - that already fits the spindle, and you can attach the hub to an arm spoke with only 1 new screw hole. You'll still need to screw the servo casing to the joint piece.

The only caveat is that most servo spindles have 25 splines or teeth, but some have 24 (usually represented as 24T and 25T) - you'll need to ensure that the hub has the same number as the servo. I think HiTec is the only major maker that does 24 teeth, but some of their servos have 25 because they realized they aren't following the defacto standard. HiTec's website is very good at saying how many teeth their servos have.

Additionally, look for servos with high torque. Many are made for speed rather than torque, because that's what RC cars needed, but for an early experiement like this the speed isn't really important - you just want to have enough torque to ensure that it can move the arm. You can find some no-brand servos on Amazon with around 20kg/cm torque (they claim, but I've never checked that aim for accuracy) for around $25. They're not super precise or quiet, but if you want both torque and accuracy you'd pay at least twice as much. For your first go at this, you don't need to move in increments of fractions of a degree; the less-accurate servo will work just fine.

Not the answer you're looking for? Browse other questions tagged robotic-arm motor actuator rcservo or ask your own question.