A quadcopter, also known as a quadrotor, is a multirotor helicopter that is lifted and propelled by four rotors.

A quadcopter, also called a quadrotor helicopter, quadrotor, is a multirotor helicopter that is lifted and propelled by four rotors. Quadcopters are classified as rotorcraft, as opposed to fixed-wing aircraft, because their lift is generated by a set of rotors (vertically oriented propellers).

Unlike most helicopters, quadcopters use 2 sets of identical fixed pitched propellers; 2 clockwise (CW) and 2 counter-clockwise (CCW). These use variation of RPM to control lift and torque. Control of vehicle motion is achieved by altering the rotation rate of one or more rotor discs, thereby changing its torque load and thrust/lift characteristics. 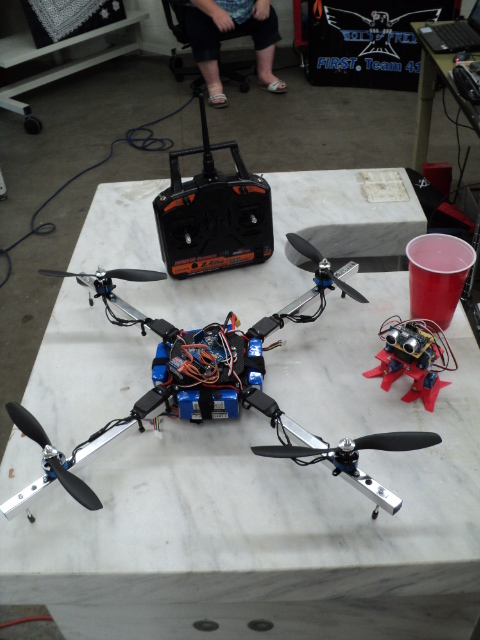 Early in the history of flight, quadcopter (referred to as 'quadrotor') configurations were seen as possible solutions to some of the persistent problems in vertical flight; torque-induced control issues (as well as efficiency issues originating from the tail rotor, which generates no useful lift) can be eliminated by counter-rotation and the relatively short blades are much easier to construct. A number of manned designs appeared in the 1920s and 1930s. These vehicles were among the first successful heavier-than-air vertical take off and landing (VTOL) vehicles. However, early prototypes suffered from poor performance, and latter prototypes required too much pilot work load, due to poor stability augmentation and limited control authority.

More recently quadcopter designs have become popular in unmanned aerial vehicle (UAV) research. These vehicles use an electronic control system and electronic sensors to stabilize the aircraft. With their small size and agile maneuverability, these quadcopters can be flown indoors as well as outdoors.

There are several advantages to quadcopters over comparably-scaled helicopters. First, quadcopters do not require mechanical linkages to vary the rotor blade pitch angle as they spin. This simplifies the design and maintenance of the vehicle. Second, the use of four rotors allows each individual rotor to have a smaller diameter than the equivalent helicopter rotor, allowing them to possess less kinetic energy during flight. This reduces the damage caused should the rotors hit anything. For small-scale UAVs, this makes the vehicles safer for close interaction. Some small-scale quadcopters have frames that enclose the rotors, permitting flights through more challenging environments, with lower risk of damaging the vehicle or its surroundings.

Due to their ease of both construction and control, quadcopter aircraft are frequently used as amateur model aircraft projects.

If I must fly my drone in bad weather, how can I maintain control of it in strong winds?

How can we use the accelerometer for altitude estimation?