I have a problem with two robots and two obstacles in a space. Each robot can communicate its measurements to the other and can measure angles and distances. The two obstacles in the environment are identical to each other.

Each robot can see both obstacles but not each other. Therefore have angle theta 1 and 2 combined with distance 1 and 2. Can the distance between the two robots be calculated? 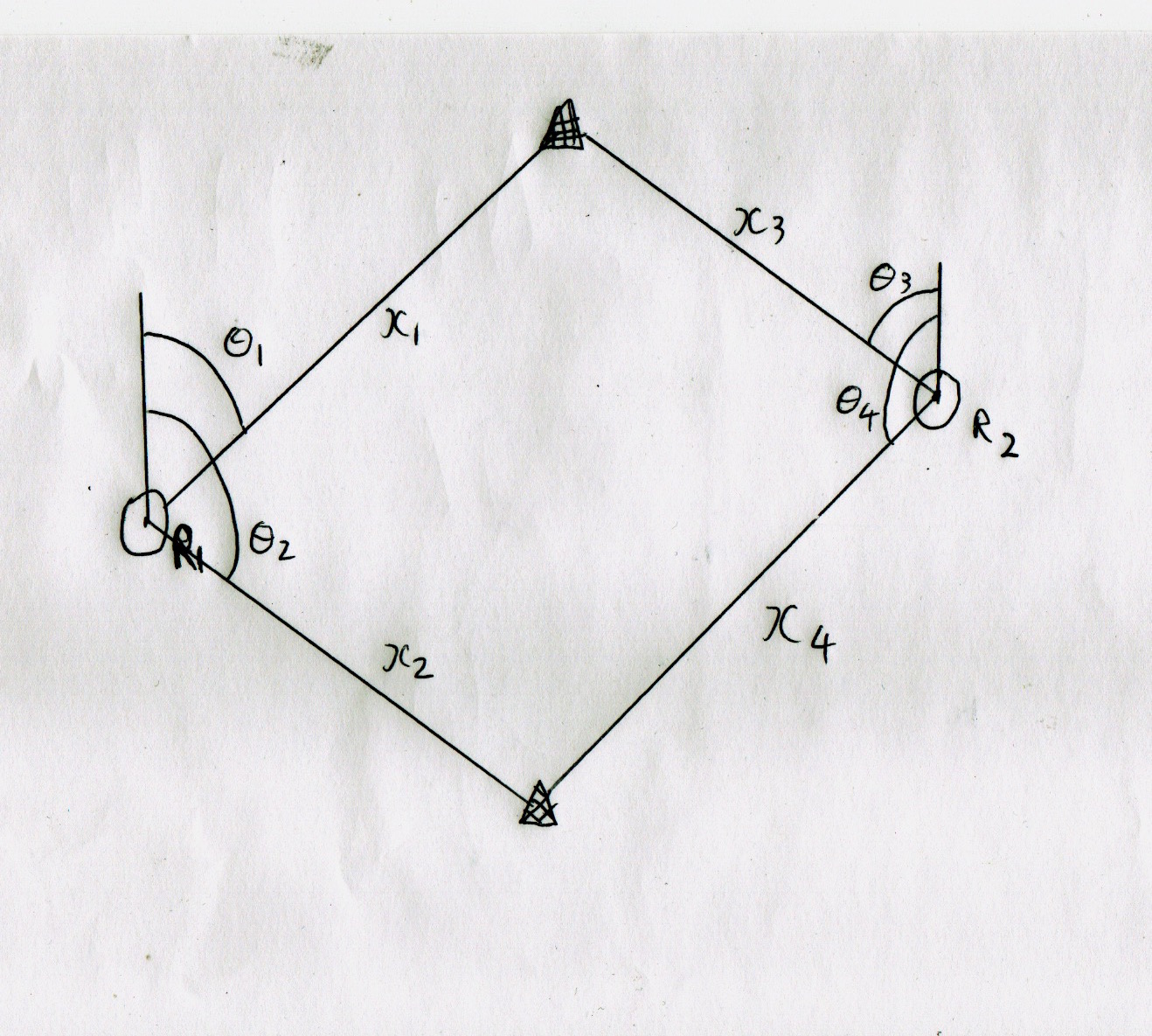 So far I have placed circles with radius of the measured distance over each landmark (triangles in my workings), this provides 4 possible positions for each robot. Red and black circles correspond to robot 1 and blue and green to robot 2. Using the relative size of the angle measurements I can discount two of these positions per robot. This still leaves me with two possible positions for each robot shown with the filled or hashed circles.

Robot 1 only has the two measurements of angle and distance and can therefore assign an id to each obstacle, but when information is transmitted to robot 2, robot 2 does not know which obstacle will have been designated an id of 1 or 2.

localization kinematics
Share
Improve this question
edited May 29, 2016 at 23:04

No, because the whole thing is point symmetric around the point in the middle between both obstacles. Each robot could be on either side, which gives 2 possible values for the distance between them, either for both being on the same side or being on opposite sides.

Some solutions could represent both robots colliding with each other and you could rule those out if they are not colliding, but in general, you don't know which solution is correct.

Each robot can see both obstacles but not each other.

Whatever property of the obstacles is used to identify them could possibly be added to each robot, which could then be detected by the other one.

Each robot can communicate its measurements to the other and can measure angles and distances.

In theory, you could measure the time this communication takes. Either by

From that time and the speed you can calculate the distance. In practice, if the signal speed is very high, you need very precise timers to do this properly.

If you consider the system to be completely static (as you have drawn it), there is no way to know.

However, if the system you are describing is not limited to 2 obstacles and one precise moment in time, then your robots can discover where they are by moving around. It sounds like the full set of data that your robot has access to -- at every timeslice -- is the following:

Distances and angles to landmarks are the raw inputs for the SLAM algorithm. So in the most extreme case, each robot would be able to run SLAM for both itself and the other robot (based on reported positions), merge the two maps, and then calculate the distance between the localized positions of each robot on that map.

There may be a simpler way to do it that I'm completely overlooking. However, based on the assumption that the obstacle IDs are not shared between robots, I'm not sure how that might work.

Not the answer you're looking for? Browse other questions tagged localization kinematics or ask your own question.

8
Whats the logic to implement a particle filter for a robot with range sensor?
0
Relative orientation of two robots
3
Mobile robot algorithm implementation error
5
Determining position from a 2D map and LIDAR
0
Using IR LED and photodiode to estimate range and bearing of other Swarm Robots
2
Find the robot pose from three beacon measurement
2
Localizing two points using self position and angle between this points
3
Iterative Closest Point for 2-D LIDAR Data
0
Modeling of Robots
2
Compute path in absolute frame from sequence of measurements