How to apply A bang-bang signal of amplitude 1 N and 1 s width as an input force to reproduce certain results in Matlab?

I working on dynamic modeling and simulation of a mechanical system (overhead crane), after I obtained the equation of motion, in the form: $$ M(q)\ddot{q}+C(q,\dot{q})\dot{q}+G(q)=Q $$

All the matrices are know inertia, $ M(q)$, Coriolis-Centrifugal matrix $ C(q,\dot{q})$, and gravity $ G(q)$ as functions of the generalized coordinates $q$, and their derivatives $\dot{q}$.

I want to solve for $q$, using Matlab ODE (in m-file), I got the response for some initial conditions and zero input, but, I want to find the response, for the aforementioned control signal (A bang-bang signal of amplitude 1 N and 1 s width), I'm trying to regenerate some results from the literature, and what the authors of that work said, regrading the input signal is the following: "A bang-bang signal of amplitude 1 N and 1 s width is used as an input force, applied at the cart of the gantry crane. A bang-bang force has a positive (acceleration) and negative (deceleration) period allowing the cart to, initially, accelerate and then decelerate and eventually stop at a target location." I didn't grasp what do they mean by bang-bang signal, I know in Matlab we could have step input, impulse, ...etc. But bang-bang signal, I'm not familiar with. According to this site and this bang bang is a controller rather.

Could anyone suggest to me how to figure out this issue and implement this input signal? preferably in m-file.

The code I'm using is given bellows, two parts:

Furthermore, the results I'm getting and what I supposed to get are shown: 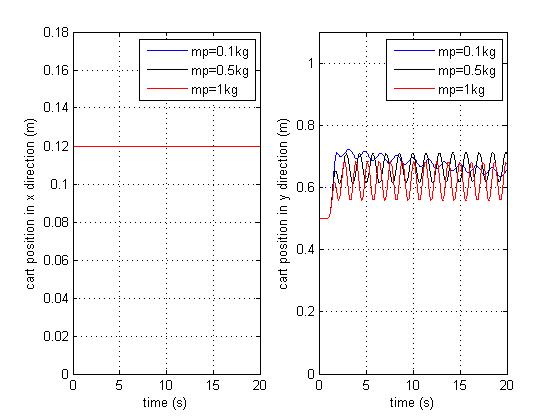 Major difficulties, initial conditions are not clearly stated in the paper, the input force direction, is only in y (which it should be), or it has different direction. I appreciate any help.

This is how I would go about simulating a nonlinear ODE in Matlab. As I mentioned in a (now-deleted) comment on your question, I typically work with linear ODE's in my line of work, which means that I usually use the (awesome) functions in the Control System Toolbox.

Now, I'll start by saying that you haven't given any definitions of what the matrices are in your equation, so I can't give you a concrete example of how to solve your specific example. If you update your question to give numbers for everything then I can modify this answer to solve your problem. That said, you give:

First I would say that this can be re-written as:

So, for an example for you, I chose an RLC circuit, which takes the form:

Typically your input signal would be a smooth function of time. Here you're looking for a bang-bang signal, which is akin to a light switch. At some time, the input signal goes from nothing immediately to some value, then later from that value immediately back to nothing.

So, where typically you would use an interpolate command to get values defined sample time increments, here you don't want those commands interpolated. You don't want a ramp, you want the signal to immediately shift.

So this question really is two parts: 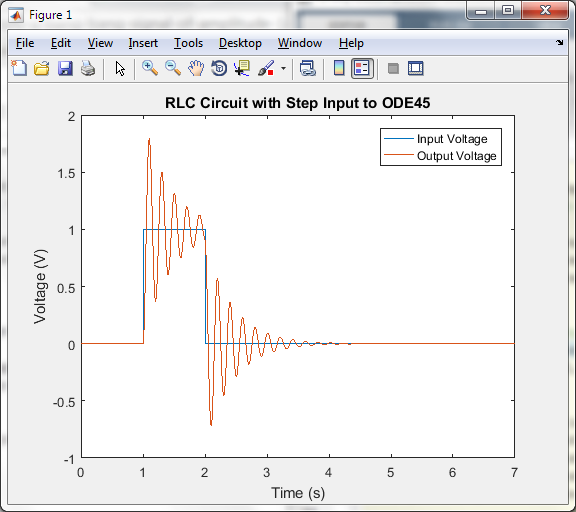 Finally, as I mentioned, if you would be willing to give concrete numbers for your equation then I could tailor this to solve your particular problem. As it stands, I can't provide any solution to a symbolic nonlinear ODE so this example is the best I can give you.

I've got the problem solved for you. The code is attached below. I'll say this, though: It's important, for a step input (bang-bang, etc.) to segment the ODE solver process, as I described above. This is because Matlab tries to optimize solving the ODE and may not take process time in exactly the way you would expect.

The segmenting method is again, as described above, where you split the solving process at every discontinuity. The initial conditions for the following step is equal to the ending conditions of the current step.

The images below are the solutions I got with the segmented method and the "all-in-one" method. The all-in-one is the way you had it setup, where the force function was determined by an if statement in the ODE function. Because Matlab chooses the sample time increments, the positive and negative segments aren't guaranteed to have exactly the same number of samples. I think this is the reason for the drift in the output of the all-in-one solution.

I found several problems with your method. When I corrected them, I got a plot that looked (to me) to exactly duplicate the plots from the paper you linked. 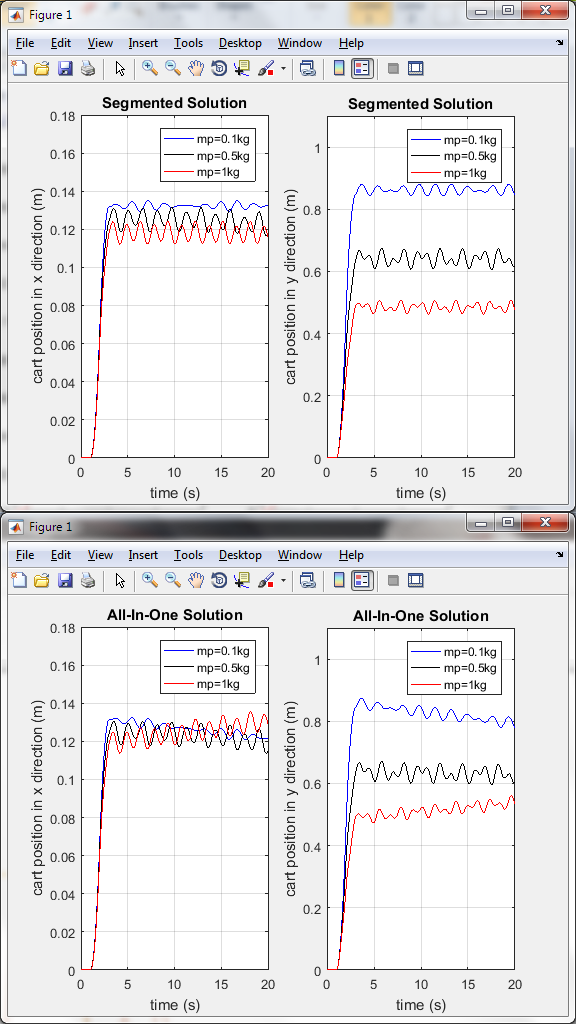 Then, the script that solves the ODE:

I took the liberty of cleaning up the code in the ODE function, I hope you don't mind.

So, to summarize, the solution to your problem is:

In bang-bang control, control inputs can only be activated similar to a switch: when they are engaged they are fully on positive, or fully on negative. Some bang-bang control studies (not many that I can recall) account for a slew rate of the controller's output, so the outputs are not modelled as square waves, but rather as trapezoids. I think this is the "bang-bang signal" you need to generate. The phrasing is odd.

It sounds as if you need to add a control force to your model that is just a trapezoid (acceleration period, constant full-on period, and deceleration period). In m-code it would be something like the following. Here I am assuming your step size is 1 msec, with a 10% slew time. You may want different slew parameters. I've written it so you can change step size and slew percents in one place.

@AlFagera, Thanks for posting a reference to the actual paper. Following the references and re-searching led me to this paper: M. S. Alam, M. A. Hossain, and M. O. Tokhi, Design of Command Shaper Using Gain-Delay Units and Particle Swarm Optimisation for Vibration Control of a Flexible System, 14th International Congress on Sound & Vibration, Cairns, Australia 2007 (https://www.acoustics.asn.au/conference_proceedings/ICSV14/papers/p197.pdf). In that paper they describe a bang-bang signal as I've done above, except their acceleration and deceleration periods are quite short.

Technically we starting at 0 velocity and returning to 0 velocity so it should be bang-bang-bang control; but it sounds strange to say that.

For theoretical analysis involving bang-bang inputs, I would use the dirac delta. I don't use matlab that much but it looks like they have it for symbolic analysis and numerical analysis. It sounds like you already know this though.