Performing inverse kinematics based on a displacement of the end effector?

I think i have an simple problem, but can't my head around how i should resolve it... 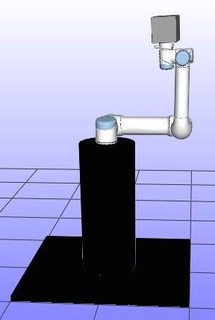 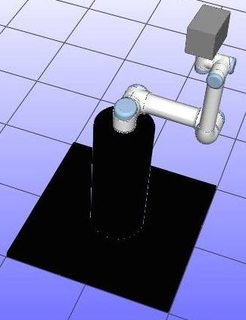 I know that I using inverse kinematics can determine the Q which positions it according the given rotation and position, but what if I only provide it a position only?

An example could be if an object was placed just above the base (see second image), it should then find all possible configurations which in this case would consist of the arm rotating around the object, while the camera keeps the object in sight...

I just realized a possible solution would be to create a sphere with the object in centrum an radius of dz, and then use this sphere to extract all pairs of rotations and position... But how would one come by with such an solution?

You always have both position ad orientation. In your case the orientation can be chosen by you to be constant (e.g. 0, 0, 0), in which case you will be not be able to track the object if it is for example above the camera.

Th camera measures the relative position of the object (relative to the camera). You subtract the distance on the z axis that you want to keep and you add the difference to the current poseition of the robot. Morever you can calculate the angle how much the endefector has to rotate to face the object. Eg. If the camera measures: Dx = 0,5, dy=0 and dz=0,5 then you would add the dx to the current tcp position (since dz=0,5 which is the distance you want to keep). After that you can calulate the change in orientation needed to face the object by

You add this (also calculate RotX and RotZ if not defined as "tool axis") to the current orientation of the end-effector and give it as reference (together withe the changed position) value for the next motion.

Not the answer you're looking for? Browse other questions tagged robotic-arm inverse-kinematics stereo-vision or ask your own question.