Quadcopter refuses to fly when the Yaw PID component is added

I would like to ask why is it that when I add the Yaw control to my PID controller for each motor. The quadcopter refuses to take off or maintain its altitude. I am curently using a Cascaded PID controller for attitude hold using an Accelerometer, a Magnetometer and a Gyroscope, and a 40Hz Ultrasonic Sensor for Altitude Hold. Since the scope is indoor I have done away with the barometer due to its +-12m error.

Without Yaw Control, the plot below shows the response of the quadrotor. 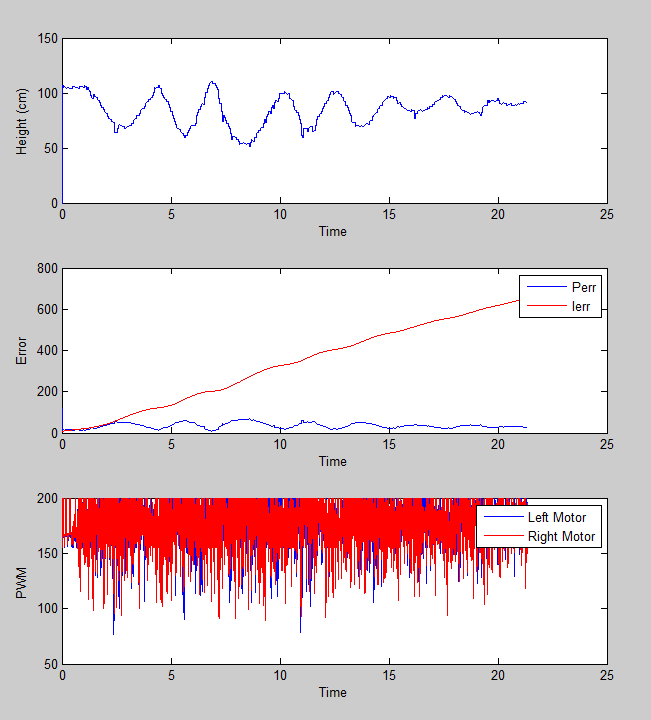 With Yaw Control, the plot below shows the response of the quadrotor. 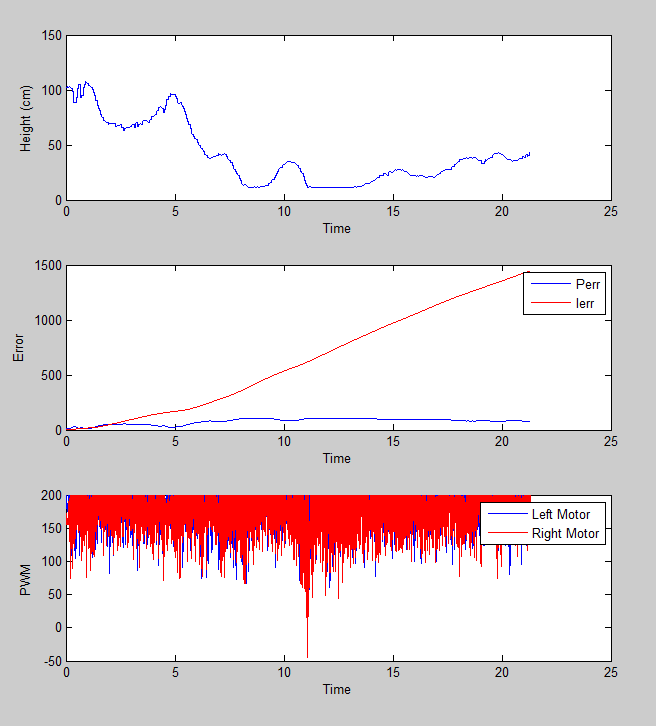 I found out that each of the outputs from each PID's give a too high of a value such that when summed together goes way over the PWM limit of 205 or Full Throttle.

The PID parameters for the Pitch, Yaw and Roll were tuned individually meaning, the base throttle was set to a minimum value required for the quadcopter to be able to lift itself.

The PID parameters for the Altitude Sensor is tuned with the other controllers active (Pitch and Roll). 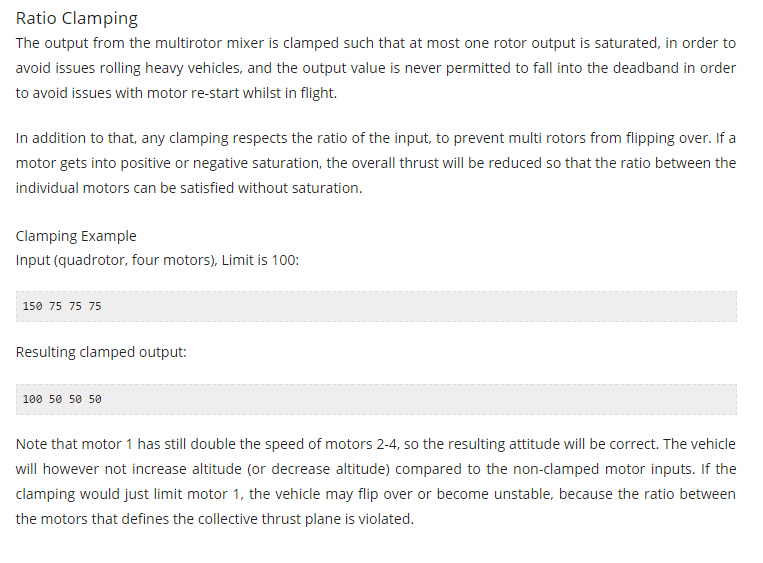 It is also possible that I've set my P gains too high thus exceeding the max RPM limit of the motors causing the Limiter algorithm to overcompensate.

I think I have set the PID parameters particularly the P or D gain too high that the computed sum of the outputs of the controller is beyond the limit. Maybe retuning them would help.

I would just like to ask if anyone has encountered this problem or if you have any suggestions. Thank you :) 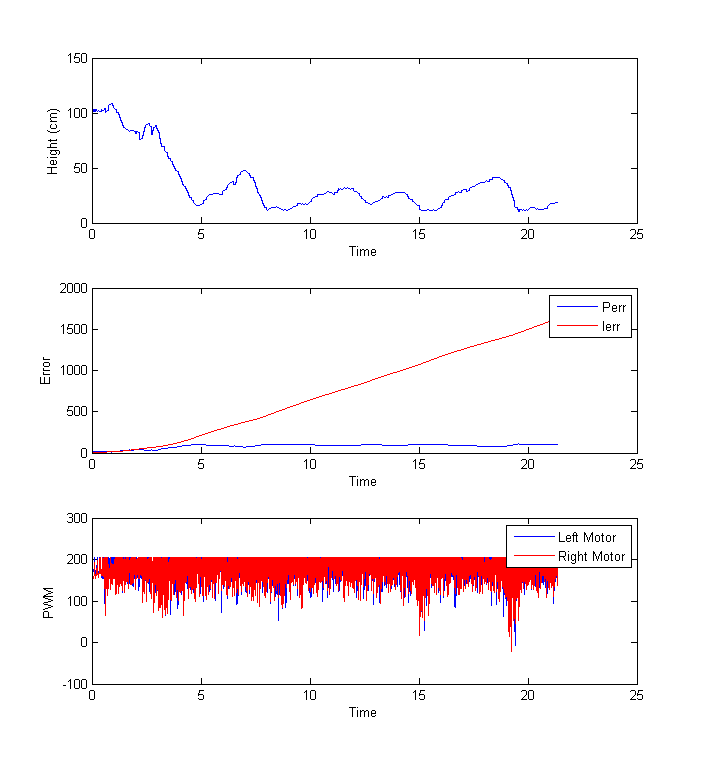 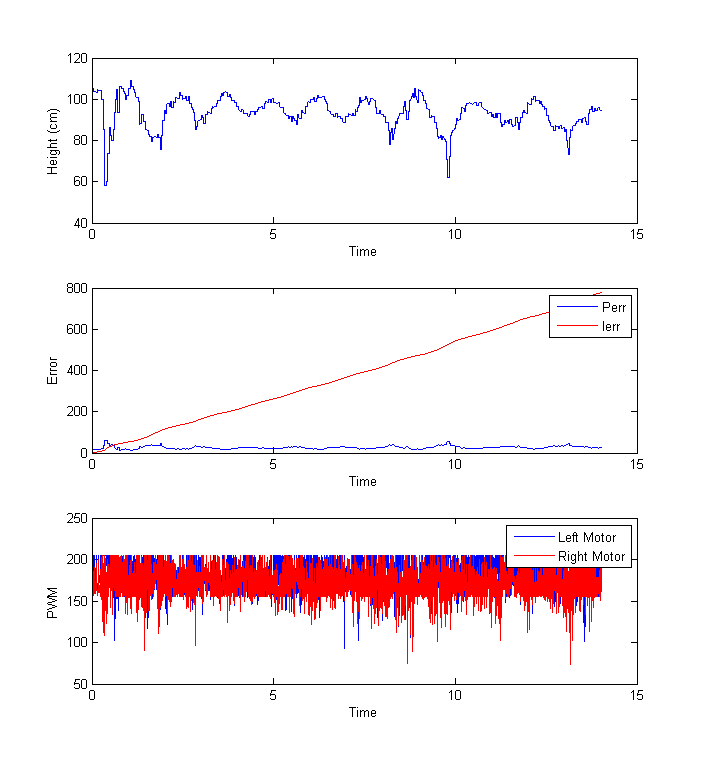 disclaimer: This is more of a longer comment than an answer. I'm not sure what the problem is. There is a lot going on here (thankfully a lot of information is provided, too) and my attention shifted around from one thing to others.

There's not much between 160 min value and 200 max. In either case (with or without the yaw controller), you are constantly hitting the limit as I see it in your diagram. The more often you limit the controller value, the more it is actually the limiter acting as a (nonlinear!) controller and not the controller itself. A limiter should kick in occasionally and not all the time.

This is mostly based on how clearly the limit cuts down the PWM:

hence the following analogy came to my mind:

Strap a belt tightly around your breast and run a marathon.

And I concluded that:

I'd try to use stronger motors so that your controller has enough air to do its job and not hit the limit so often.

It can happen that you can manipulate the PID parameters at will and nothing changes. One reason for that can be a limit that makes your changes irrelevant. New parameters might change the output from 260 to 280 or to 220, which will have to effect if they are all going to be limited to 200. This is why constantly hitting the limit can be a bad thing.

With the yaw part, the phenomenon seems to be more pronounced, but not by much. I guess this is something to be aware of especially when summing up controller values, but not the actual problem.

Anyway, from the given diagrams I cannot tell why one would fly and the other would not.

Then another attempt was made and again one configuration works and the other does not.

I have tried to run the control loop at a slower rate and noticed that there is a drastic change in each of the PID components such that it is not exceeding the limit too much and now its flying again.

I tried to find differences between both diagrams. You are right, the limit is not exceeded as often as before in the flying operation. But what else is different?

May I ask what happens to the P gain contribution to the output if the speed of the control loop is decreased (dT increased). Does it have any significant effect like on the I and D gain which is time dependent (D decreases I increases)

Now I had a look at the separate controller error values. I combined them into the following image for comparison: 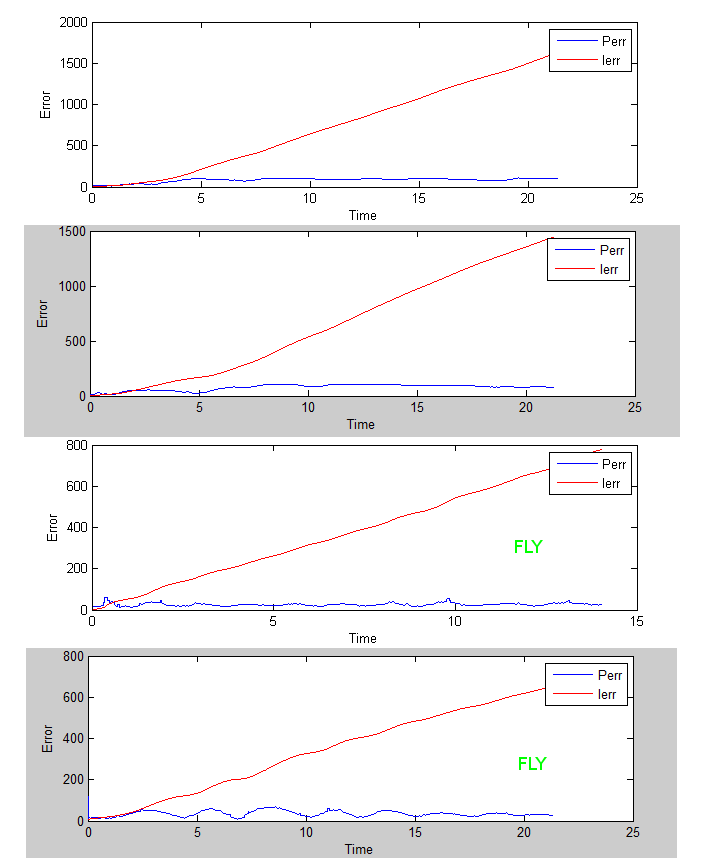 The first thing that I notice is that there's a steady state error and thus $I_{error}$ constantly grows aka the red is the integral of blue and blue is bigger than zero all the time. This is not a good thing.

If there's a steady state error that the P gain cannot compensate, the integral part should grow and compensate the constant offset error.

The integral part should converge to some value. At least if it's compensating for a constant offset. I don't know what integral error from what controller this is, but an error that keeps growing is undesirable.

But maybe there is something inherently different between fly and nofly? The diagrams are a little hard to read because the axis are of different scale.

I tried to scale the images in gimp to fit and this is the result: 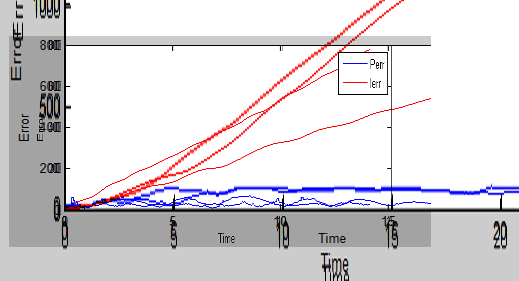 The pixelated plots are those two when it did not fly. Their overall $P_{error}$ is bigger and thus the $I_{error}$ is steeper.

But I don't think this is the problem. Look at the difference between the two $I_{error}$ of the cases when it flew. (the non-pixelated ones)

I'd say there's no other significant difference between the two cases.

There's a constant error in the system. The controller cannot reduce that error. It looks as if the control loop is not closed properly.

Take a step back. Even in your first image, the height value oscillates and $I_{error}$ increases constantly. Inspect what's going on there.

Then create the angle controller separately. Put the quadcopter onto a pivot point or pole and see if it can maintain its angle. The height controller should be turned off.

Not the answer you're looking for? Browse other questions tagged quadcopter control pid raspberry-pi stability or ask your own question.

2
Suitable control algorithm for Air Muscle based joint?
14
Quadcopter PID tuning
2
Implementing a position control for UAV through a flight controller. Plant model is unknown
4
How to find a solution for quadcopter PID control
3
Quadcopter PID output and duty cycle conversion
6
Quadcopter PID Control: Is it possible to stabilize a quadcopter considering only angle measurements?
3
PID Tuning for an Unbalanced Quadcopter: When do I know if the I-gain I've set is too high?
2
Quadcopter PID: Controller is Saturating
7
Quadcopter PID Algorithm
3
Correct Quadcopter Yaw control implementation