I know that this algorithm has been widely used and I am failing to understand it. But where am I going wrong? 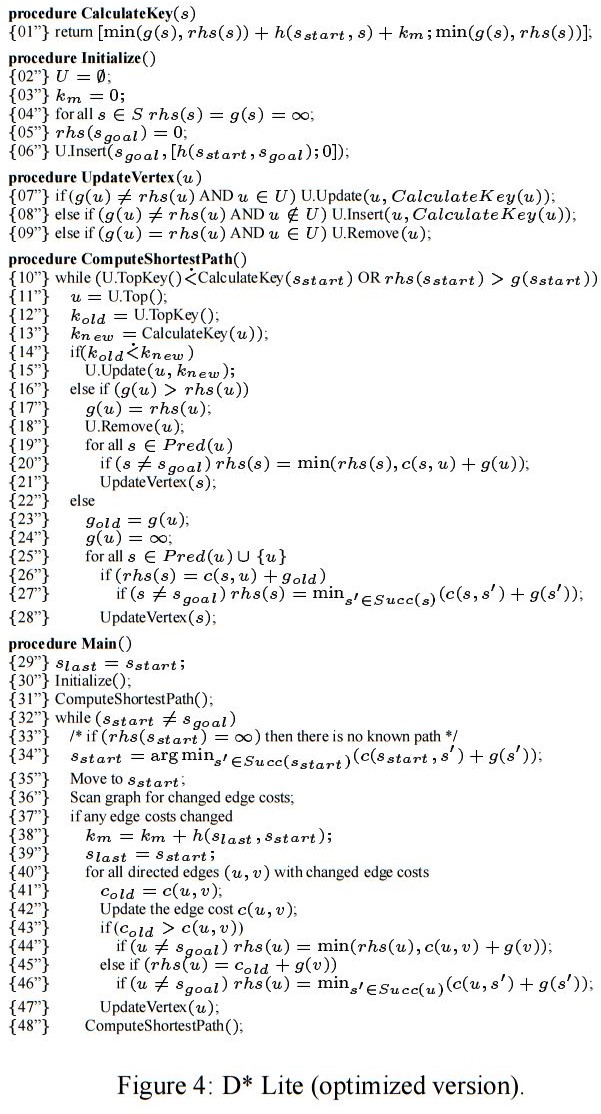 The first relevant line is line 6:

Basically speaking, this is an association of the goal to some vector with two values in it. Now $U$ looks like this:

Of course, $U$ is a list of such associations, but within the context of this question there's only one element in it.

That is not necessarily correct. The relevant lines are 12

Looking at what $U$ is above, this line is equivalent to:

I think the extra parenthesis is a typo. I will ignore it. This value actually comes from a function call and results in the following:

Where $s$ is the parameter passed to the function, which is actually $u$ which in turn is actually $s_{goal}$, also as you stated $k_m=0$, thus:

I think there's your problem. I for one cannot see a condition $k_{old}\leq k_{new}$ being evaluated in the code. I guess you are referring to line 14, but that line actually looks like that:

This is not a less-than-or-equal sign. That is a les-than sign with a dot above it. I don't think they are the same thing and I wonder if the following is actually valid way to express that: $$\le\neq\dot\lt$$

Anyway, what the heck is $\dot\lt$? I don't know. What I think it means is that it's an element wise less-than operator. In languages like Matlab or Octave it's common to add a dot to denote that an operator is applied element wise. The thing is that it doesn't make too much sense to apply a less-than operator to a vector. It's defined for scalar values, not vectors or matrices. I admit that I'm not sure about this one.

The condition in line 14 is not satisfied.

Now all of the above is under the assumption that the condition of the while loop in ComputeShotestPath() is true and the body of the loop is executed.

The (first part of the) condition looks like this:

With the assumptions from above this expands to:

Again, I don't know how this algorithm works exactly, I had a quick look at the paper and from what I understood is that $h(s_{start}, s_{start}) = 0$ and $rhs(s_{start}) = 0$, which makes me doubt that the condition is true.

In other words: I don't think the while loop is even running at all and if it actually does, it's not because of that part of its condition.

tl,dr; Holy cow, stop staring at nontextual pseudocode! Get yourself an implementation (or write it yourself) and use a debugger to step through the program.

Run the actual code on an actual machine, this is what matters in the end.

Not the answer you're looking for? Browse other questions tagged mobile-robot control robotic-arm motion-planning algorithm or ask your own question.