Dynamic model of a robot lifted by a balloon (Multibody system)

I'm having a hard time trying to understand how to obtain the dynamic model for a system similar to the image.

The balloon is a simple helium balloon, however the box is actually an aerial differential drive platform (using rotors). Now there's basically a model for the balloon and another for the actuated box. However I'm lost to how to combine both.

The connection between both is not rigid since it is a string. How should I do it? Is there any documentation you could point me to, in order to help me develop the dynamics model for this system?

Since I'm so lost, any help will be useful. Thanks in advance! 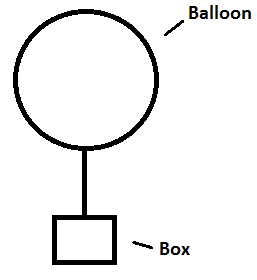 So, this would differ a little from gravity where gravity is always a vector pointing down and always acts on the center of mass, the string is a vector force of variable direction, that always acts at the point of attachment, that may not exist (if the box is closer to the balloon than the length of the string).

Gravity acts through the center of mass, so, provided there are no other reaction forces (not hinged/pivoting, negligible air resistance), there's no torque applied to the body. What you'll find is that, by acting on a point not the center of mass, the string will apply a torque to both bodies, in addition to pulling them.

As I mentioned, the actual distance between the two points may exceed the length of the string; this has to deal with joint stability and how you choose to solve and resolve forces across joints.

FYI, I'm not sure what your background is, but you're entering a pretty complex field by allowing force transmission across a flexible joint. I'm a fan of Rigid Body Dynamics Algorithms by Roy Featherstone, but there are certainly a number of other algorithms that you can use to solve this dynamic system. It looks to me like Featherstone's algorithm is at the heart of Matlab's SimMechanics toolbox, but that's just an educated guess; it could of course be something else.

If you were going to model this in SimMechanics, you would look for two spherical joints, one on each body, with a telescoping joint that allows for motion from 0 to L_string. At lengths < 0, the objects collide, at lengths > L_string the string is taut. Please comment if you would like more guidance, but I think this is about what you were looking for.

I found this group of examples on the Matlab FileExchange to be very useful when developing models in SimMechanics. The most useful thing I found there was a model (screenshots below) that shows how to interface a SimMechanics block to a SimScape block. This allows a SimMechanics "Prismatic Joint" to be used with a SimScape "Translational Hard Stop" block. Using this setup, you can set the limits on the prismatic joint to start at L_String, the limits on the translational hard stop to be 0 to L_String, and then you can adjust the end stop spring constants and damping until you get a reasonable reaction.

The spring/damping constants will adjust the "snap" applied to each body when the string pulls taut (or when the two collide). You can adjust the upper/lower end stop constants such that a collision (L = 0) is different than the string pulling tight (L = L_String). Again, this should be a prismatic joint inserted between your two spherical joints.

Here's the screenshots! First, create a translational interface between SimScape and SimMechanics: (Provided in the FileExchange package I linked above).

Then, add that interface to a prismatic joint: 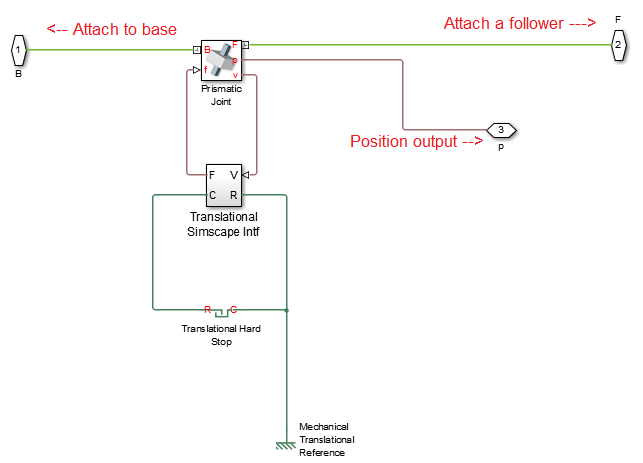 Configure the prismatic joint to start at L=L_String. Ensure that there's no internal mechanics set and that motion is automatically computed with force provided by input (this is required to work with the translational interface).

Then, configure the translational hard stop such that the limits are from 0 to L_String. At this point I would accept the default stiffness and damping and run the simulation to see how you think it works. My defaults are because I work with some colossal industrial equipment that uses tensioners bigger than I am. I think the stock defaults are somewhere ~100. 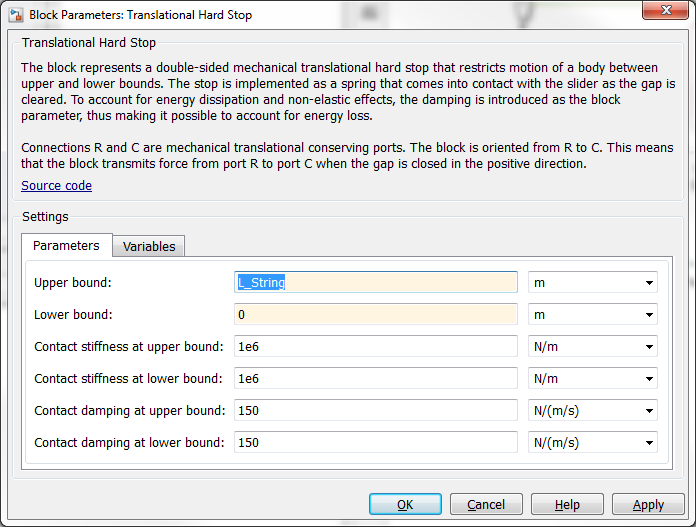 Finally, I would suggest you save that configuration as a custom library block so you can have it in the future. You can do more complex things, like mask the L_String parameters such that you can customize the default lengths, etc. from the custom library block, but a how-to for that is beyond the scope of what I'm covering here. Anyways, once you've set everything up, I would suggest you just link a block to your string and run a quick simulation. Edit the parameters as you see fit until you get the desired response or it matches your experimental data. 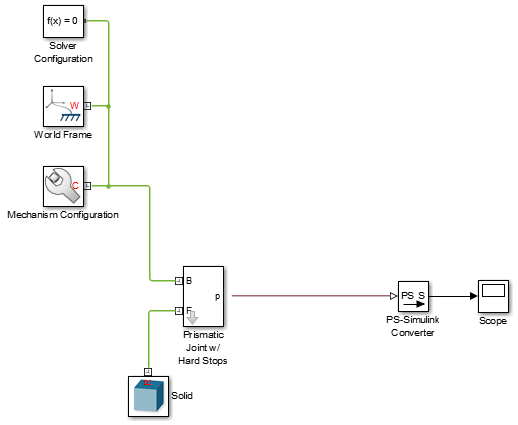 Not the answer you're looking for? Browse other questions tagged mobile-robot kinematics dynamics or ask your own question.

8
Building a balancing robot with differential drive
3
Is modelling a robot and deriving its Equations of Motions more applicable to a system that is inherently unstable?
4
robotic arm DOF
0
6DOF serial robot (PUMA robot) dynamic model equations
2
Methods for state estimation and real-time path planning of a mobile robot
1
Dynamic model using identification for control
3
When and when not to use the Inertia tensor in Kinetic energy computing?
0
Quadrotor dynamics: How is torque created