What determines the amount of noise an actuator produces?

Many robots and other mechanical devices produce the signature whirring noise as they move, some produce less. What makes the difference? What restrictions a silence requirement places on a robot?

Many parts of the actuation system create noise. One important noise generator is the gear train between the motor and the effector. All of those toothed wheels rattle slightly against each other, each contributing slightly to the orchestra of noise. This is one of the reasons behind the development of Maxon's Koaxdrive gear, which is targeted at low noise applications: 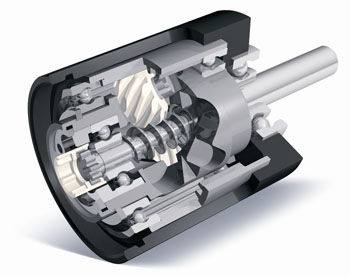 There is the motor with its mechanical balancing, and its bearings, and all associated rotary parts, with their respective vibrations, adding up. If a brushed DC motor is used, the brushes have an inherent commutation "whirring".

Also friction noise of all moving parts, though this last is much damped as a side-effect of lubricants used, hence usually not a big factor.

A parallel would be the ancient floppy disk drives, which rotated much slower than a blue-ray drive, but made quite a racket, compared to the near-silent, excellently mechanically balanced, modern Brushless DC motors running blue-ray drives and hard disks.

Whilst the two answers in place focus on mechanical noise (which is what I think you are asking about) there is also, of course, electrical noise which manifests itself as Electro-Magnetic Interference (EMI or also known as EMC)

Anything that contains a motor is likely to generate a level of EMI... normally a small level that you don't notice it, but with bigger motors and/or high switching speeds it will become noticeable.

Symptoms include picture breakthrough on your TV (etc) with the motor running.

Not the answer you're looking for? Browse other questions tagged motor actuator noise or ask your own question.

2
ArduIMU noisy output in Quadrotor
6
What is the difference between RC motors for cars and helicopters?
3
What should I be looking for in a DC motor that will be used in a UROV thruster?
0
Are scissors what I want for moving straight up and out?
0
What part do I need to bypass the gearbox of a hoveround motor? Helical splined hub?
2
How many encoders should I have?
2
Diagnosing a lower torque on one motor of a Zumo Robot
1
How to determine actuator and process for PID, and how to intepret the output