Optimal location of the center of mass for an inverted pendulum

These two views both seem plausible, and yet also seem contradictory. For an inverted pendulum, is there an optimal balance between the two perspectives? Or is one absolutely right while the other absolutely wrong? If one is wrong, then where is the error in my thinking?

The two views are not contradictory; they apply to two different situations, which you are treating as a single one.

Your personal experience about having a low center of mass applies to situations where there is a stable position -- a local minimum height for the center of mass. For example, if you have a vase on a shelf, the height of the vase's center of mass (in relation to the width of its base) determines how far it can wobble from side to side without tipping over. Shown here with trucks: 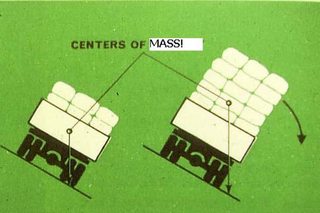 The inverted pendulum situation has no "stable" position -- no local minimum for the center of mass. This shouldn't be surprising, because it rests on a single point. 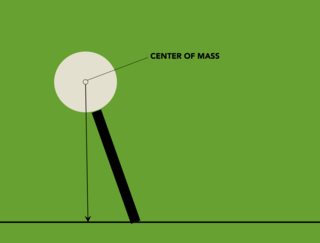 So if either one of these is the "absolutely wrong" way to look at an inverted pendulum, it's the "resting in a stable position" situation.

Lower centers of mass are more stable, but an inverted pendulum is inherently unstable; any perturbation will set it off.

The height to center of mass depends on how much track you have available, your reaction time, how you're measuring displacement/force, etc.

Well, in that instance, if the reaction force is constant (say you're evaluating the minimum detectable force), then the angle associated with that force declines as the pendulum length $L$ increases.

Similarly, if you've got a rotary/angular encoder that has some minimum detectable angle, then the reaction force that puts on your carriage increases as the pendulum length increases.

In addition to the minimum detectable cases, consider the kinetic energy of the pendulum. This is an inverted pendulum, so the portion of the potential energy that is converted to kinetic energy is given by:

(All of this assumes $\theta=0$ when the pendulum is vertical, by the way, just in case there's any confusion)

So now, in addition to the fact that you're traversing more track ($\Delta x = L\sin{\theta} \approx L\theta$), the pendulum also has a higher starting kinetic energy, which means now you have to take a larger control action to damp the motion and return to steady state.

I made a short spreadsheet to generate some plots to show the differences:

You can answer this by considering the equations of motion of an inverted pendulum: $$\ddot{\Theta} = \frac{g}{l} \sin(\Theta)$$

If you agree that the easiest system to control is that which has the smallest $\ddot \Theta$ for you to compensate, then you have three options:

On paper, having a non-zero $l$ is good enough - the system is controllable as soon as the CG is not on the pivot axis. In practice, however, you need to be able to control the pendulum angle when a reasonable amount of force is applied to the cart (what is reasonable depends on your preferences and budget). When the pendulum is vertical ($\theta$ = 0), the pendulum acceleration is proportional to the cart acceleration:

If your goal is just to stabilize the pendulum, it may be desirable to have a large $m l$ and a small $I$ - so your control inputs more directly affect the pendulum angle. If you have constraints on force (and power), cart displacement, etc. or if you have other goals then you may have to choose these parameters differently.

As pointed out in other answers, some systems are more stable when the CG is lower. An inverted pendulum, however, is unstable (or for $\theta = 0$, marginally stable) for all (non-zero) values of $l$, so this theory doesn't apply. In general, it is desirable to have a large $l$ and small $I$ because it makes it easier to control the pendulum.

Not the answer you're looking for? Browse other questions tagged dynamics balance or ask your own question.

4
Finding Center of Mass for Humanoid Robot
4
What is the bicycle model for a dynamic robot?
0
Why do I need an additional moment of inertia term in the cart-pole dynamics equation?
3
How can I compensate for pendulum and cart motion when using an accelerometer to detect the tilt angle?
3
Guessing the K matrix gain for the Optimal Control LQR?
0
Finding center of mass and support polygon for quadruped robot
0
How to calculate center of mass with a prismatic joint