My small robot has two motors controlled by an L293D and that is controlled via a Raspberry Pi. They will both go forwards but only one will go backwards.

I've tried different motors and tried different sockets in the breadboard, no luck. Either the L293D's chip is broken (but then it wouldn't go forwards) or I've wired it wrong.

Here is a run down of what works. Let the 2 motors be A and B:

When I use a python script (see end of post) both motors go "forwards". When I change the values in the Python script, so the pin set to HIGH and the pin set to LOW are swapped, motor A will go "backwards", this is expected. However, motor B will not move at all.

If I then swap both motors' wiring then the original python script will make both go backwards but swapping the pins in the code will make motor A go forwards but motor B won't move.

So basically, motor A will go forwards or backwards depending on the python code but motor B can only be changed by physically changing the wires.

If you see this diff https://www.diffchecker.com/skmx6084, you can see the difference: 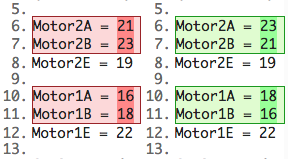 Below are some pictures. You can use the colour of the cables to link them between pictures 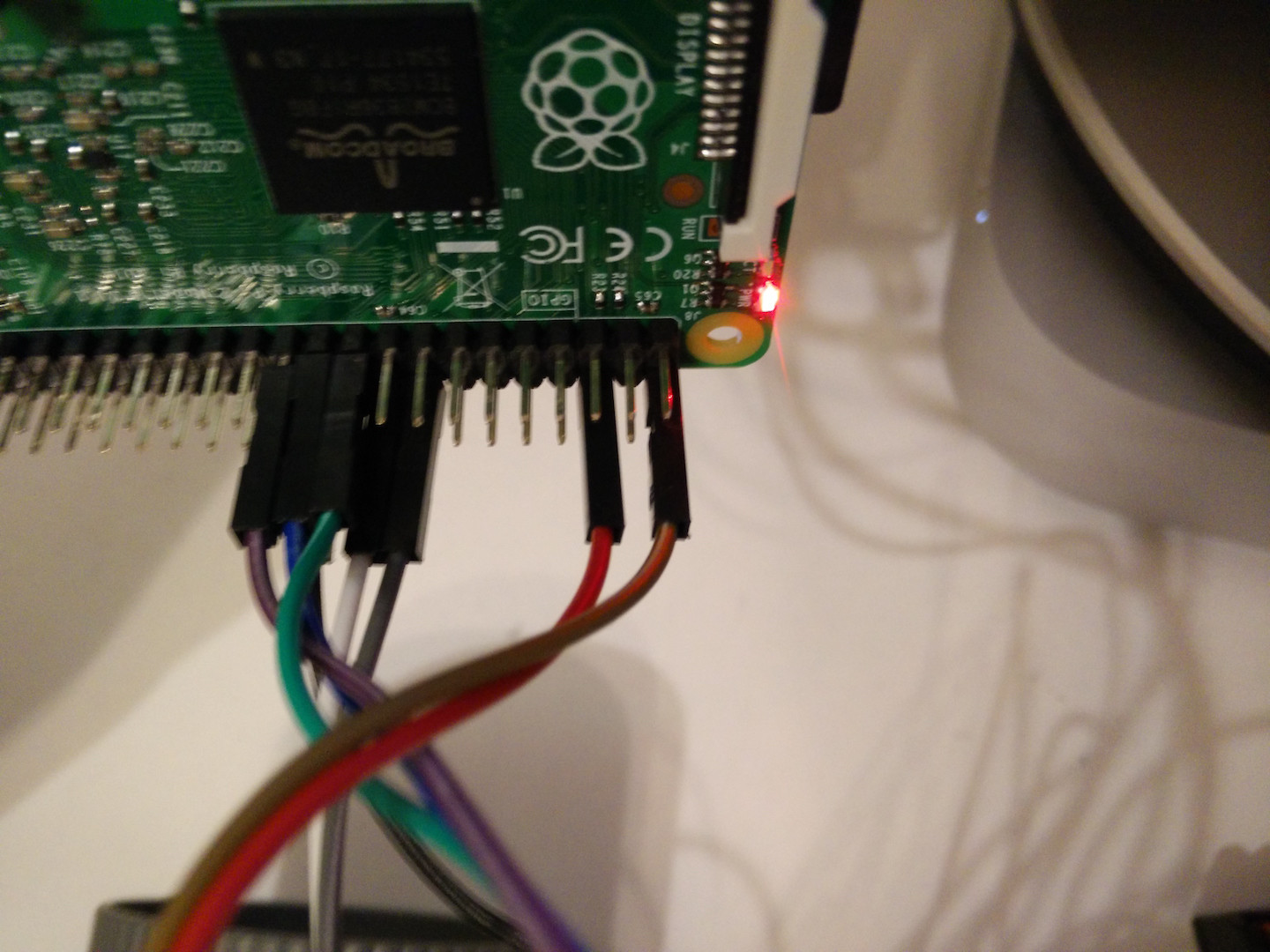 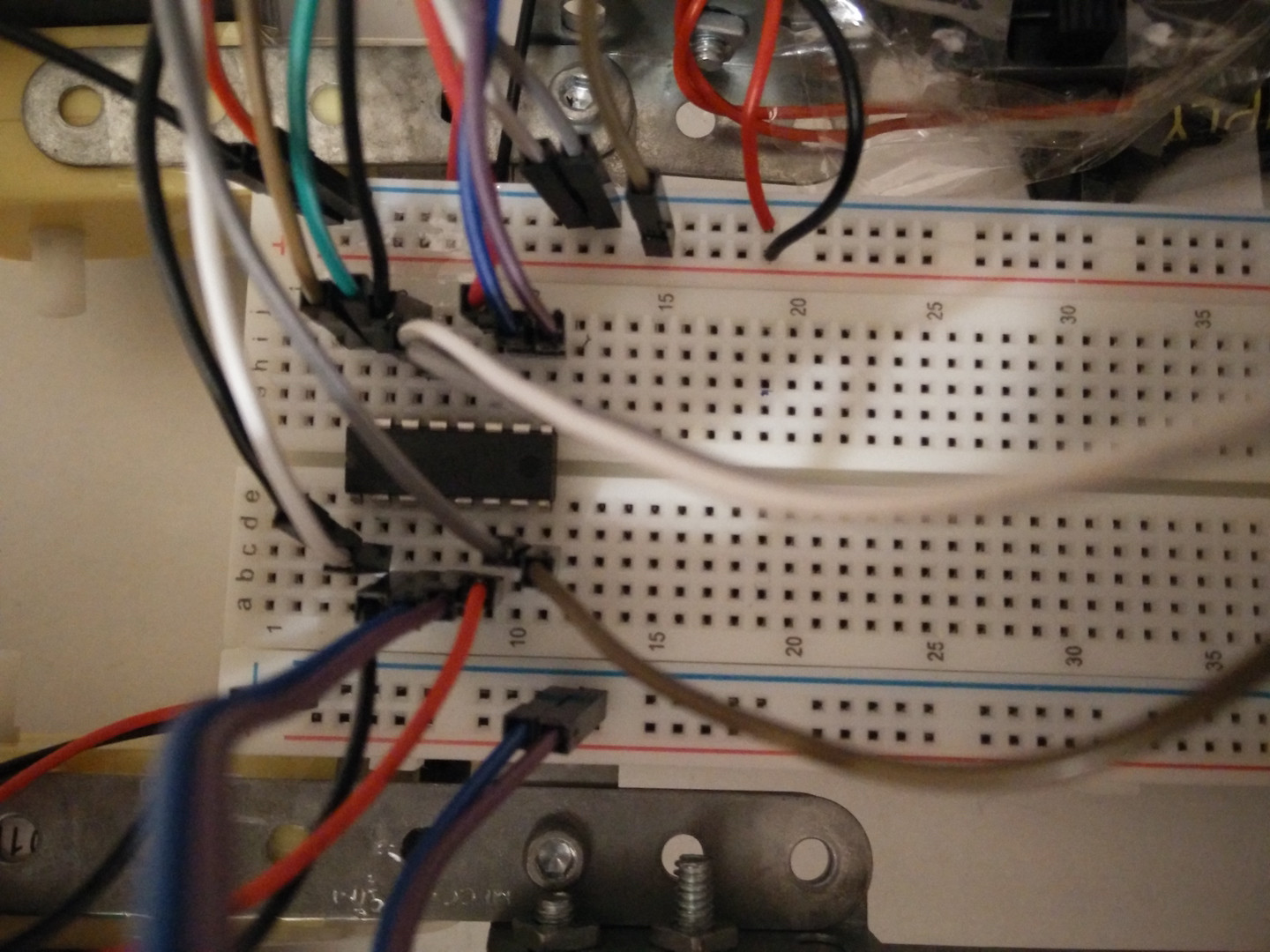 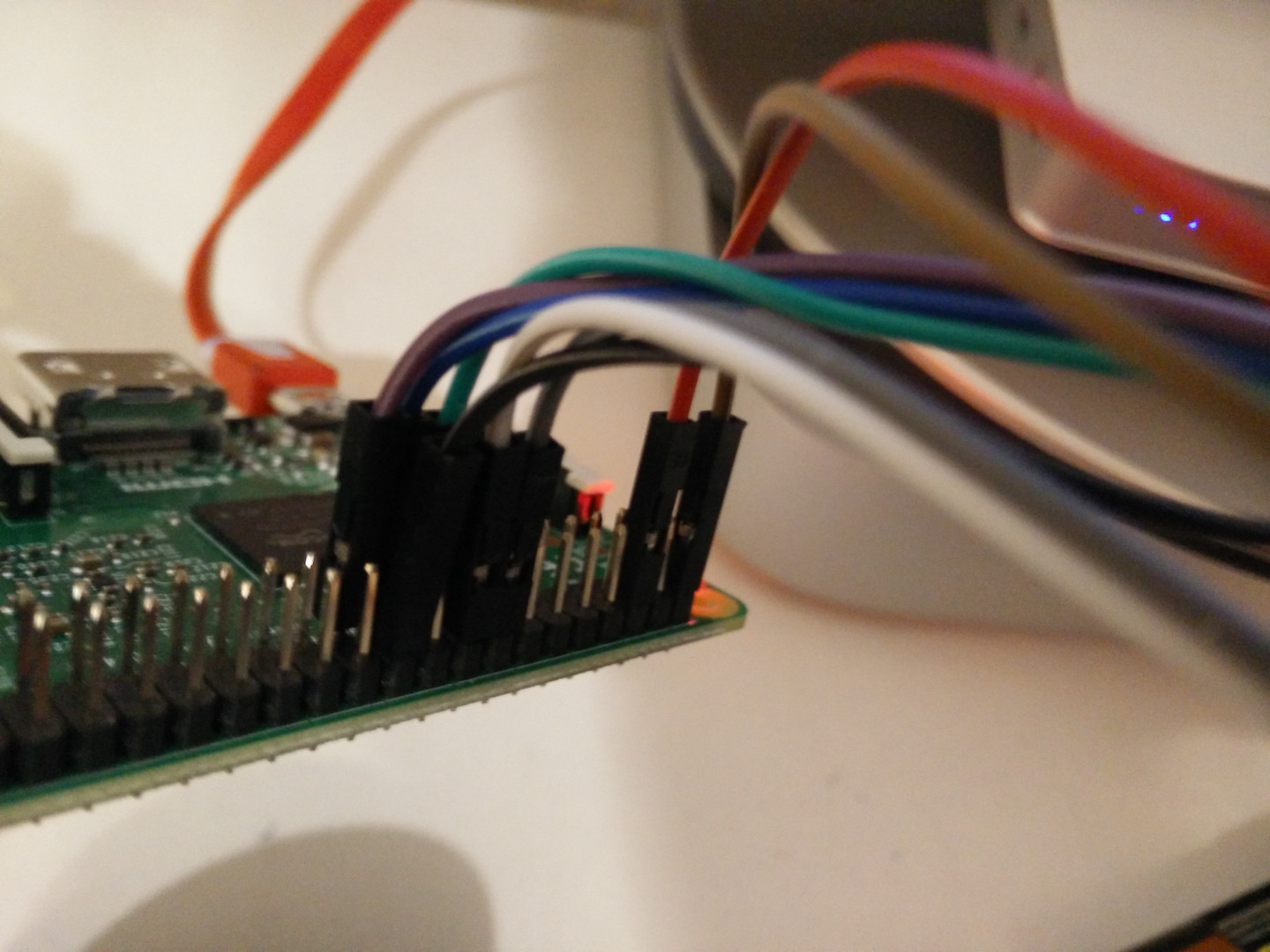 Either the L293D's chip is broken (but then it wouldn't go forwards) or I've wired it wrong.

I'm going to guess that you have not wired the motors to the driver chip correctly. This is just a guess, though, because you haven't posted pictures or schematics of your wiring.

In looking at a diagram of the chip, it looks like maybe an easy place to go wrong would be to wire into a ground pin on the chip instead of to one of the motor outputs. 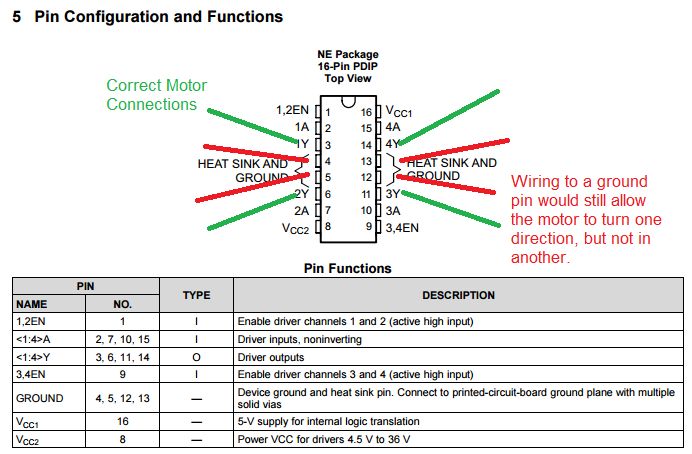 You can see in the picture above from the datasheet (linked above) that the "heat sink and ground" pins are right beside the driver output pins. If you happened to wire one of your motor leads to pins 4, 5, 12, or 13 instead of 3, 6, 11, or 14, then the motor would still turn one direction (HIGH to LOW), but would not turn in another direction (LOW to LOW) because it's not connected to the driver pin that should be HIGH.

Again, pure speculation on my part, but it would seem to explain all of your symptoms. Please take a picture of your wiring and edit your question to include it.

It's hard to tell in your pictures, and I can't see which way the chip is oriented, but it looks like:

So it looks like to me that when you set "Motor 2E", to enable motor 2, you are actually NOT enabling motor two, but instead you are setting maybe what you're calling 2A in your code. Then, when you think you are going "forward", you set "2A" LOW and "2B" high - what you're calling "2B" is actually the motor enable, and that's why it's turning on.

When you try to turn the other way, it looks like you're setting "2A" HIGH and "2B" LOW, but again what you're calling "2B" is actually the motor enable pin, so you're disabling the motor.

If that doesn't work, please post clearer pictures and we can troubleshoot some more. Particularly, I'm looking to see the chip's orientation and a better (crisper and better lit) shot of the wires where the enter the Raspberry Pi. Also, you have 3 white wires or very light gray and it's hard to tell where they're going.

There are a few tests that will help in this sort of situation. Try either of these.

Test 1. Get a logic probe (a simple low-cost device that will serve you for many years!) and use it carefully on the L293D. Test each of the two Enable pins and each of the four Input pins, and make sure each of those pins reads either High or Low as you would expect. This is the most certain way to find a poor connection or incorrect wires.

(Note about the logic probe: always make sure the probe tip is placed centrally and firmly on top of the IC pin you are testing; if you slip sideways and "short" the probe tip between two pins, you could damage an output pin on the Raspberry Pi, depending on the situation.)

Test 2. First disconnect the Raspberry Pi completely and put it aside. Take the wires that go to the motor controller inputs, and physically connect each of these to power, either zero volts or the VCC connection. You are effectively sending the signals by hand instead of by software. If the motor now works as expected, then perhaps your Raspberry Pi has a damaged output pin. If not, either you have misunderstood the connections of there is a problem with the driver.

(As you probably don't have a logic prove, I suggest you at least try test 2 in the first instance. That alone will probably help.)

Not the answer you're looking for? Browse other questions tagged wheeled-robot raspberry-pi or ask your own question.

2
Controlling a conveyor belt with a time based motor
7
Unwanted Arduino reconnect: Servo + Arduino + Python (Raspberry Pi)
1
Raspberry Pi for two wheel robot?
0
I can't get motors to turn with Raspberry pi
19
Robot never goes straight
1
Which mechanical device could repeatedly present an ID tag to a card-reader
5
Why to combine a Raspberry Pi (or similar board computer) and an Arduino for controlling motors?
4
How can I stream Kinect V2 tracking data from PC to Raspberry Pi 3 through WiFi?
0
Compatibility of my quadcopter build
2
How do I convert centre-returning joystick values to dual hobby-motor direction?