How to implement transmission in tracked chassis with one motor?

I see that in small robots tracked chassis is implemented with 2 motors, each powering one side of the vehicle, like this: 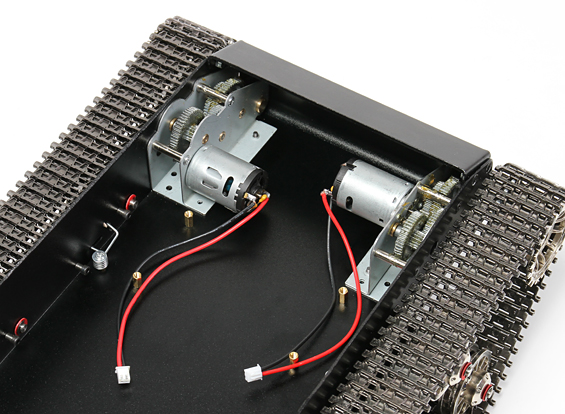 But in real scale tanks I assume there is only one motor so there must be some way of applying power to both sides independently.

Yes there is and the principle is same as wheeled vehicles. There is a part in vehicle chassis called differential which transmits the raw power from the engine to the axle. Tanks and other tracked vehicles use a similar system to utilize a single engine output for both sides.

Although going forward is pretty simple, there is a major problem that still persists. Since tanks don't have additional mechanism for turning, they use 2 different methods which acts as a solution.

The first one is a basic solution, there are 2 different brake clutches for individual tracks. When one of them is used, the corresponding track slows down and the vehicle turns in that direction by dragging the tracks.

The second one is called neutral steering and not that common. It was used in tanks such as German Panther. This system has a hybrid gearbox to set different speeds in different directions for each track. Vehicles with this mechanism can do a stationary 360 degree turn. Neutral steering looks pretty but trying to implement it into a robotic infrastructure requires a high knowledge in mechanical engineering as this kind of steering system is a very complex one.

Not the answer you're looking for? Browse other questions tagged tracks gearing chassis or ask your own question.

3
How high of a gear ratio can a motor have?
3
Lifting robotic leg with only one servo
1
One motor, two wheels (motor direction rotates one wheel forward, reverse for other wheel)?
0
How to design a robot chassis so as to avoid bending issues?
0
How to choose a servo motor for solar tracking mechanism?