Quadcopter PID Control: Is it possible to stabilize a quadcopter considering only angle measurements?

I am a student currently working on an autonomous quadcopter project, specifically the stabilization part as of now. I am using a tuned propeller system and I also already considered the balancing of the quadcopter during component placements. I had been tuning the PID's of my quadcopter for the past 3 1/2 weeks now and the best I've achieved is a constant angle oscillation of the quadcopter by +-10 degrees with 0 degrees as the setpoint/desired angle. I also tried a conservative 7 degrees setpoint with the same results on the pitch axis.

As of now my PID code takes in the difference of the angle measurement from the complementary filter ( FilteredAngle=(0.98)*(FilteredAngle + GyroAngleVel*dt) + (0.02)*(AccelAngle) ) and the desired angle. 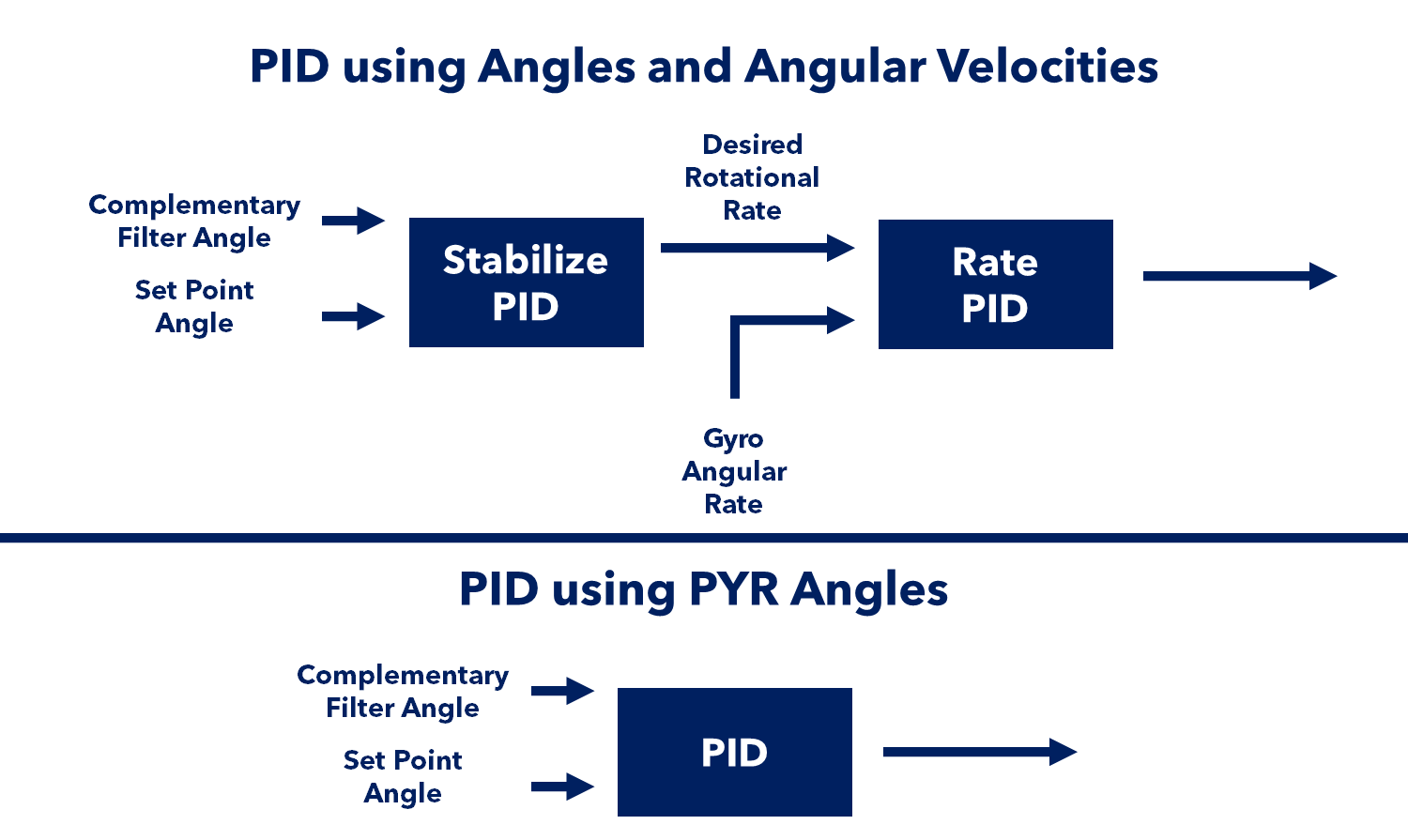 I have read somewhere that it is IMPOSSIBLE to stabilize the quadcopter utilizing only angle measurements, adding that the angular rate must be also taken into consideration. But I have read a lot of works using only a single pid loop with angle differences (Pitch Yaw and Roll) as the input.

In contrast to what was stated above, I have read a comment from this article (https://www.quora.com/What-is-rate-and-stabilize-PID-in-quadcopter-control) by Edouard Leurent that a Single PID control loop only angle errors and a Cascaded PID loop (Angle and Rate) that utilizes both angle errors and angular velocity errors are equivalent Mathematically.

If I were to continue using only the Single PID loop (Angle) method, I would only have to tune 3 parameters (Kp, Ki & Kd).

But if I were to change my code to utilize the Cascaded Loop (Angle and Angular Velocity),

It is possible to stabilize a quadcopter using only angle measurements in a single loop pid. However it is easier to stabilize a quadcopter using a cascaded PID controller. Yes you are tuning more parameters. Firstly you tune first the inner loop rate PID controller using the gyroscope's (the fast sensor, but drifts) angular rate readings then tune the outer loop stabilize PID using an angle setpoint and angle measurements from the sensor fusion of the angle readings from both the accelerometer and the angles integrated from the angular velocity readings from the gyroscope. I found that it was the easiest way to achieve stable flight coupled with my now current control loop rate of 530Hz.

Other related helpful questions with answers:

How are you managing to get any angle from the code you posted, filter = (0.98*gyro*dt + 0.02*accel)? Gyro output is in $\mbox{deg}/s$, where acceleration is $\mbox{deg}/s^2$. When you multiply gyro times time, you get an angle unit, $\mbox{deg}$, (not an angle, see below) but then you're adding that to an acceleration, which doesn't have the correct units.

Also, for the gyro portion, you're just getting to the correct units. Angular position is the integral of angular velocity, meaning that you have to sum those gyro*dt segments to accumulate an angle. Otherwise all gyro*dt gives you is the angle that you moved in the last time interval dt.

Can you check if your code matches what you wrote in the question and then update the question?

Now, instead of getting your gyro output to angular position units, you've gone the other way and gotten to angular acceleration units. Worse, you're also now accumulating that acceleration, which doesn't make sense.

What you should have somewhere in the initialization portion of your code is:

Then, in your loop, update the accelerometer-based angular velocity by numerical integration:

Finally, you can fuse those two readings with your complementary filter:

Not the answer you're looking for? Browse other questions tagged control quadcopter pid raspberry-pi stability or ask your own question.

6
PID output does not reach setpoint precisely enough
5
Will this pseudocode work as a basis for a flight controller?
3
Need help for a quadcopter PID