Tf frame origin is offset from the actual base_link

I have built my differential drive mobile robot in solidworks and converted that to URDF file using soliworks2urdf converter. I successfully launched and robot and simulated with tele-operation node. Since i am intended to use navigation stack in i viewed the transform of the robot in rviz which resulted as below. 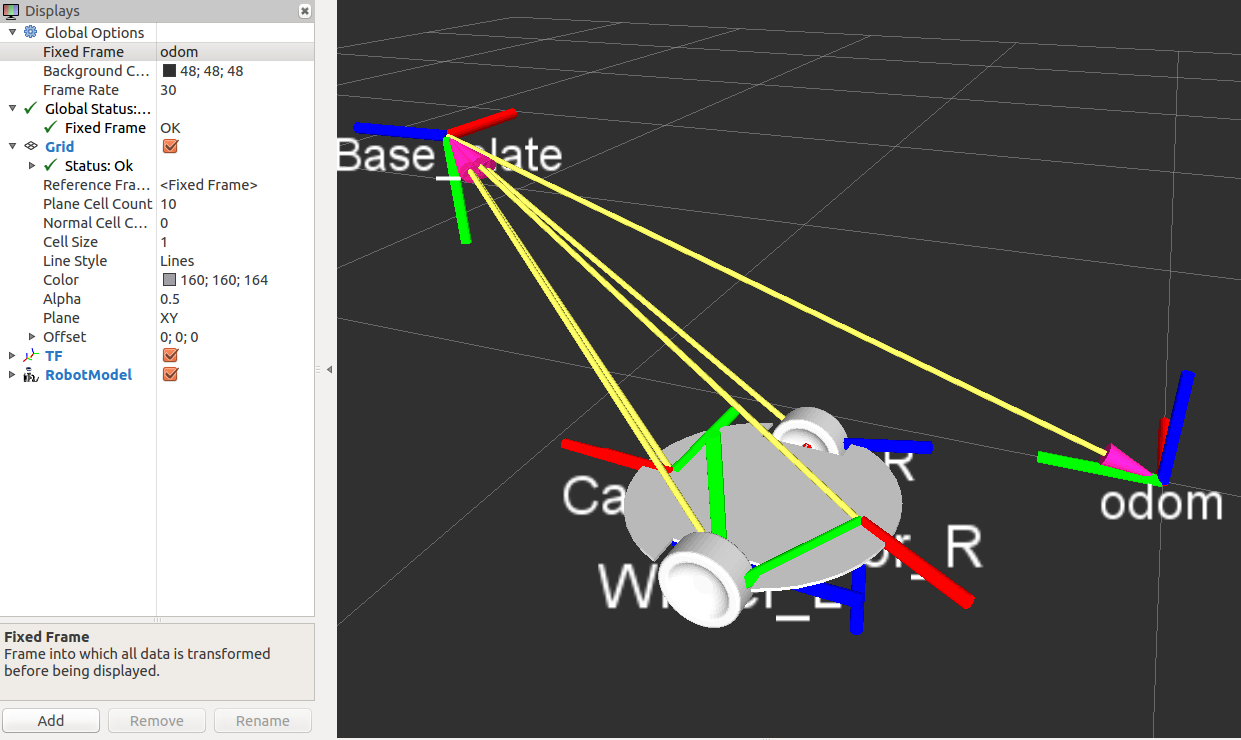 As you can see the base plate is the one which supports the wheels and castors but the tf of base plate is shown away from the actual link and even odom is away from the model. Where have i gone wrong and how to fix this. Refer the URDF of model below.

It looks like most of your parts have no rotation, but some of them do, so I'm going to guess that you didn't mate your assembly to the origin planes in Solidworks.

Open your assembly, and check if it says "underdefined" at the bottom. Solidworks (annoyingly) puts the first part down fixed, but not mated, to a random position in the assembly space.

So, in the parts tree, right click the top part (should have (f) after the name, indicating it's fixed), and click "float". You may have to expand the option list to see this.

You may also need to mate the wheels to prevent them from rotating in order to get the "fully defined" message at the bottom.

I'm on my phone at the moment; I'll add some figures after I get to work.

Here are some pictures OP provided. I've marked up what I believe to be the error. I think that the URDF Global Origin is set to be the same as the Solidworks assembly origin. In this case, for the robot, the robot (global) origin should be the origin of the Base Plate, but I am betting that the Base Plate is not mated to the assembly origin, so this is causing the discrepancy in the simulation visualization. 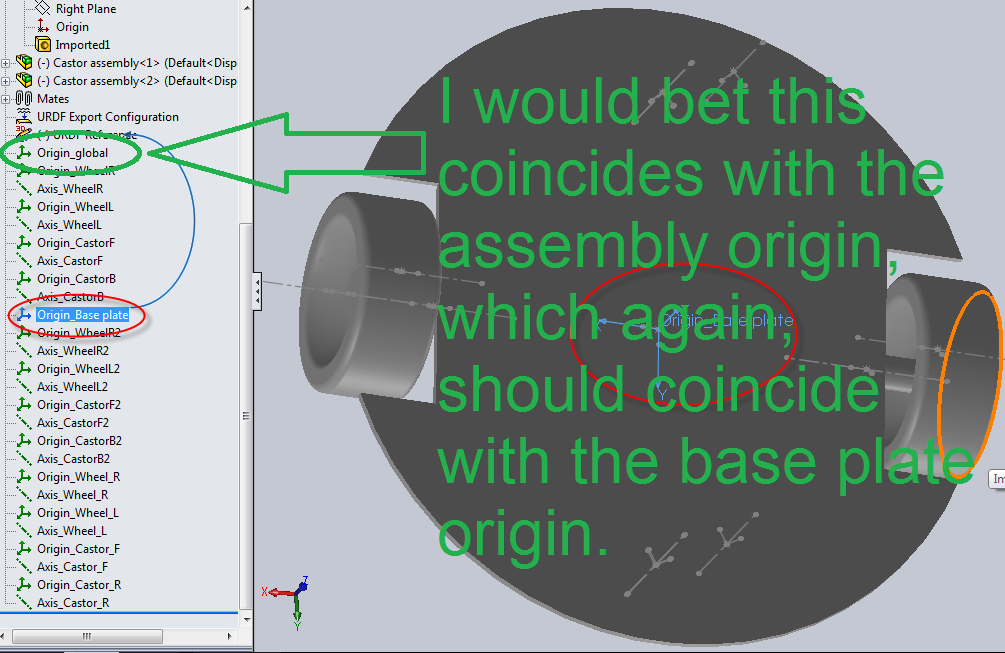 Here's a picture walk-through of mating a part to the assembly origin. If you need anything clarified, please let me know in a comment, but if you have a new question about something then please just make a new question (they're free!) 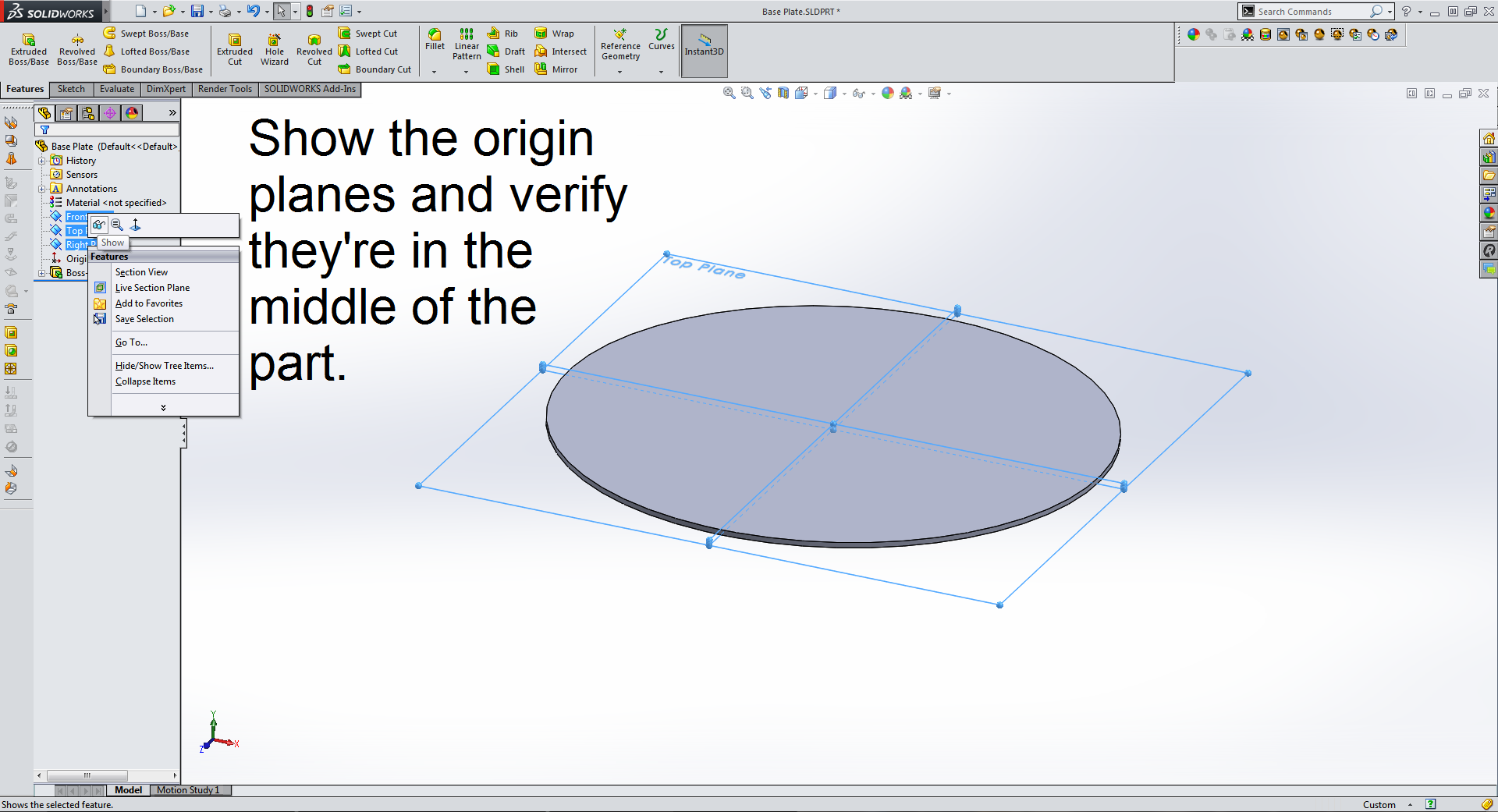 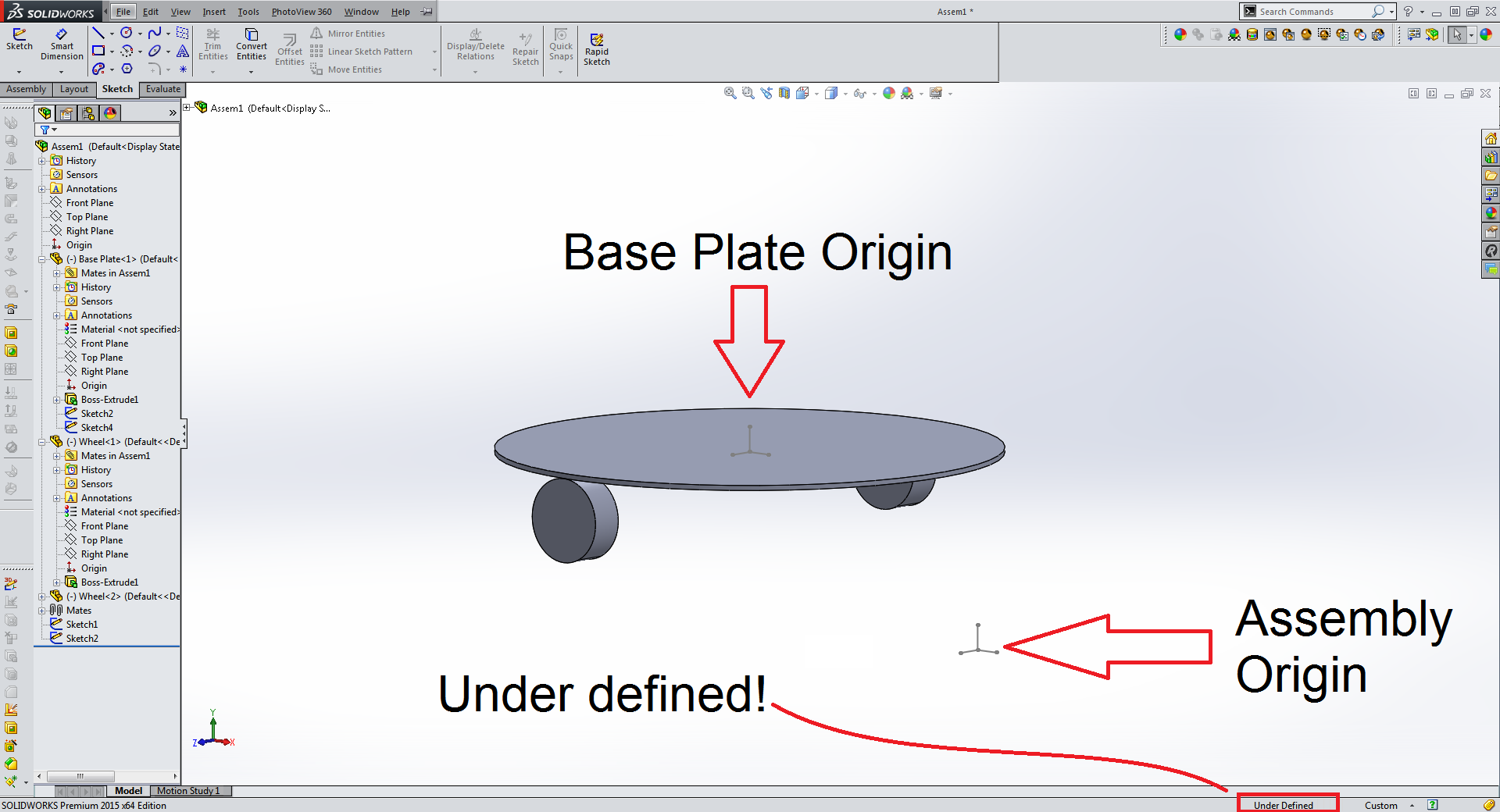 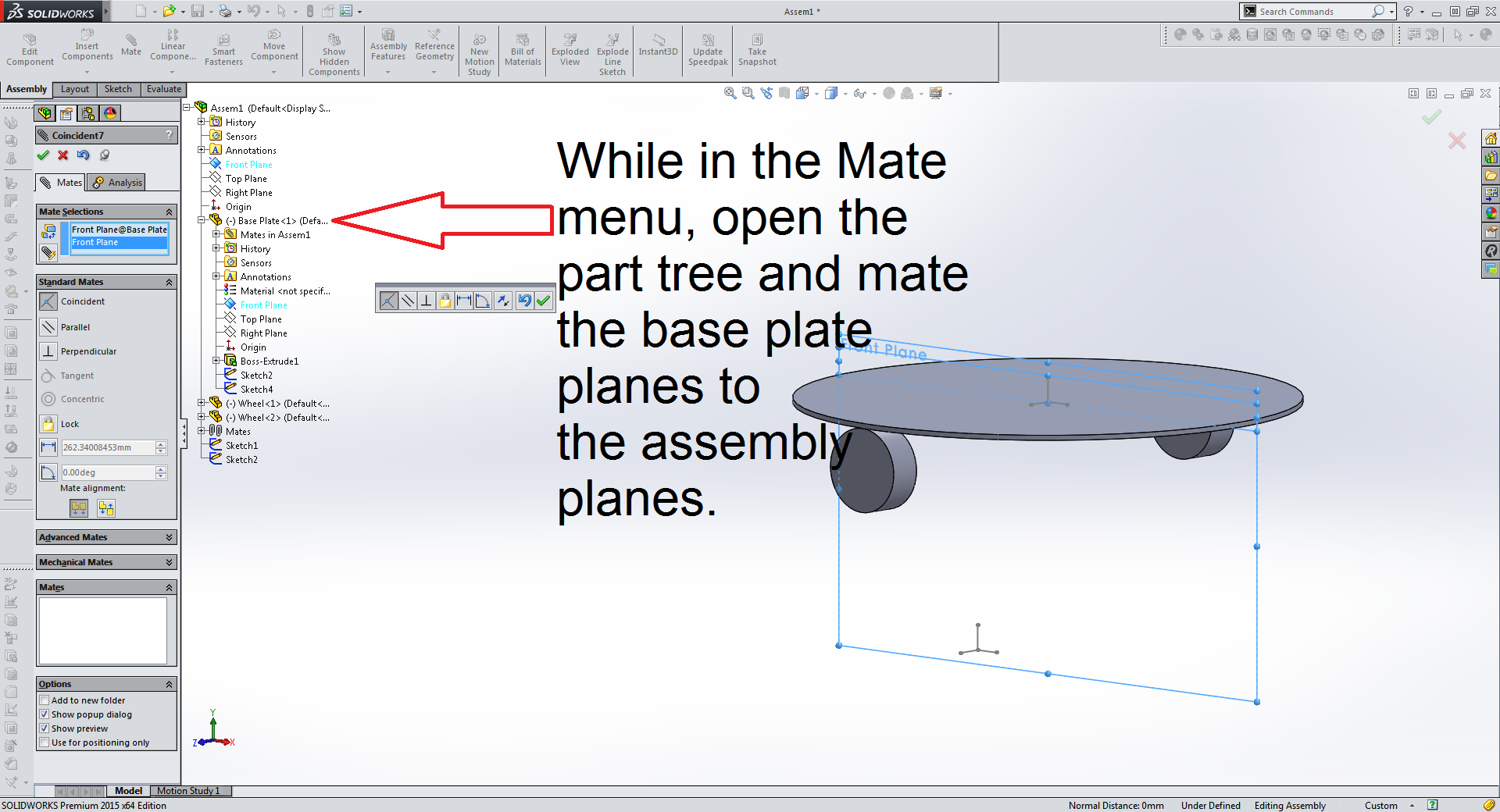 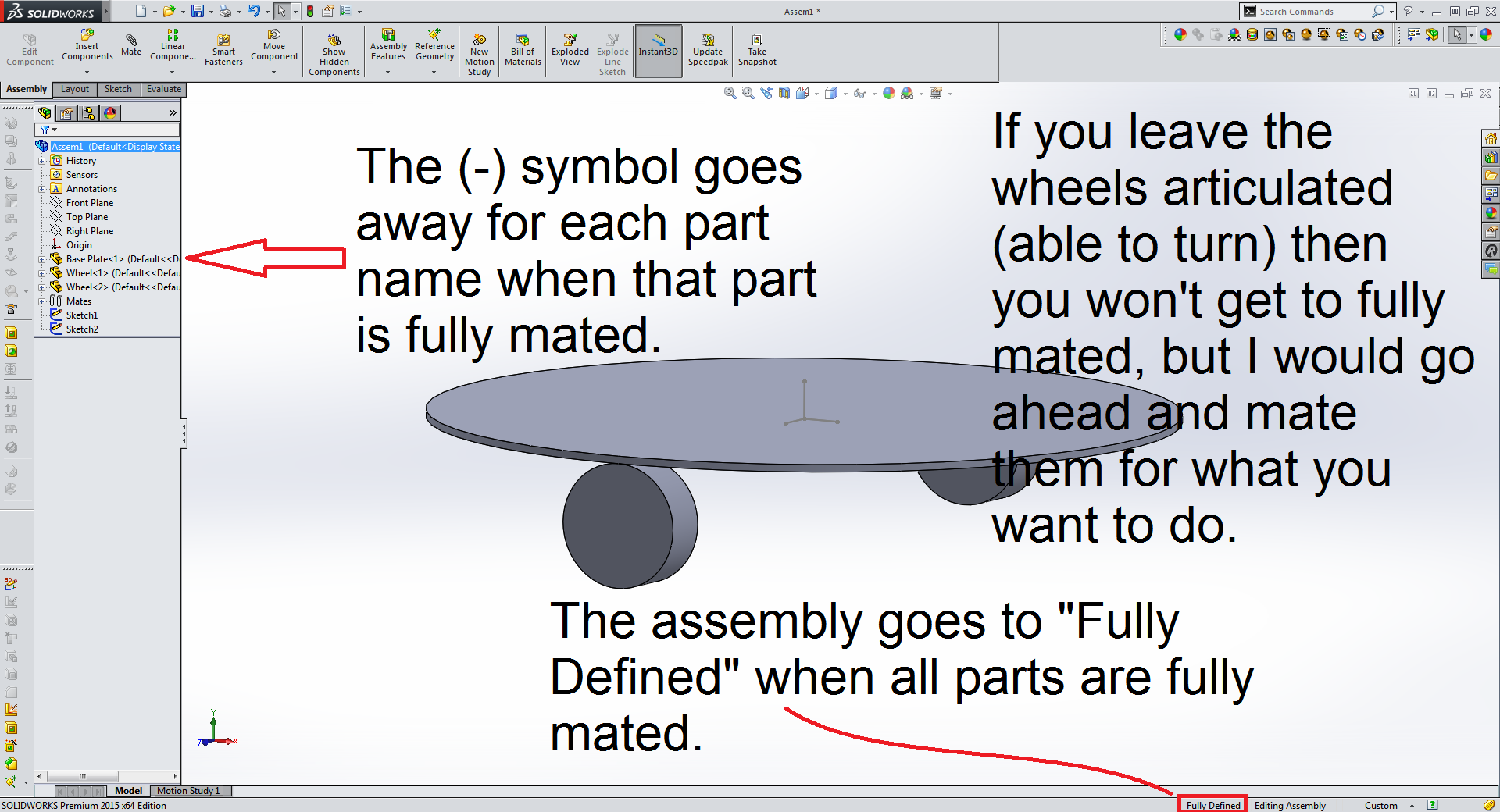 6
Space elevator: What is still needed, apart from the cable and propulsion?
3
How to get the projection matrix from odometry/tf data?
1
How to know the payload of the chassis from its motors?
2
Find the robot pose from three beacon measurement
0
How to read data from the VN100 IMU on Ubuntu?
1
RLException: neither a launch file package nor a launch file name
2
How to use Quaternion from IMU to get the transformation to inertial reference frame?