Want to improve this question? Add details and clarify the problem by editing this post.

I have to program an autonomous robot to traverse through a grid given in the following figure.
But the main problem is that the nodes to visit is not known beforehand, it will be received by the bot in real time.
E.g.- after reaching the node 19, the bot now has to go to node 6. The shortest path(19-17-7-6) can be calculated by Dijkstra algo but i don't know how to make the robot traverse that path.
Any idea ? 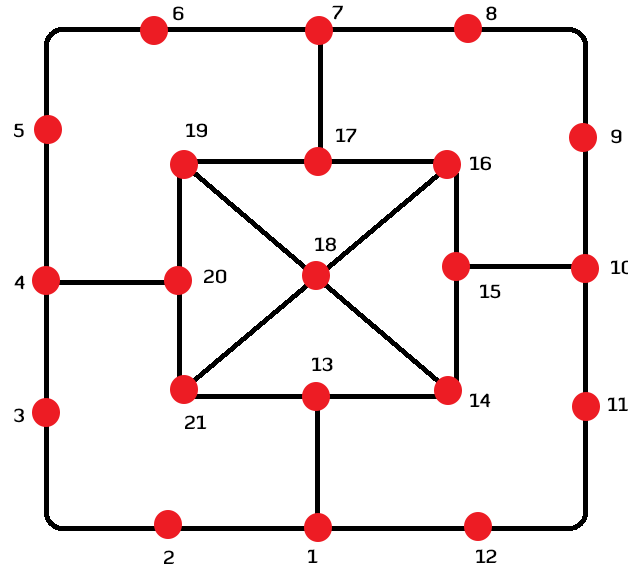 Edit: Sorry for not making the question clear enough.
I am facing the problem in determining the current position and the direction the robot is facing so i can't define the set of commands (turn left/right/forward) to traverse to the next desired node.
I am thinking about an extra array for previously visited nodes and the current node and an extra variable for facing direction.
But for that i will have to define command sets for each node from each and every node.
Any better idea ?

You are absolutely correct that Dijkstra's Shortest Path Algorithm can tell you the correct path for the robot to follow. The problem seems to be that you cannot tell where the robot is, and what actions to make the robot take to get to the next node.

There's no "right" answer here, but I can offer some guidance about how I'd do it.

Where is the robot

Repeat this process until only one unmarked node remains. Without orientation, this will never happen though (for example, 4 and 10 are identical up to orientation)

If you have no orientation information, and no way to observe outgoing edges, then history is all you have. If you know what node you started at, then by all means, you must come up with a complete sequence of actions to get the robot to the desired node. Here's how we might do that.

Let's assume the robot starts at 1 and has to get to 21. I'd program a small subroutine that did the following.

Using this, the robot always knows his current node and next node. We only assumed that we knew the starting orientation.

There are generally three parts to a simple roboitic system:

Your path-planning application that uses Djekstra's algorithm to find a path covers only the Guidance part. You still need to be able to estimate where you are, then change your actuators (wheel direction, speed etc..) in order to achieve your goal position.

You can do all this in simulation with Gazebo + ROS, I think everything you need is already developed open-source in ROS.

A very good introductory resource is from Peter Corke "Robotics, Vision and Control".

Not the answer you're looking for? Browse other questions tagged mobile-robot automatic dynamic-programming or ask your own question.