I am very new to robotic design and I need to determine what parts I will need to assemble an arm joint. The joint will contain one timing belt pulley which a remote motor will be turning, a forearm that the pulley will be rotating and an upper-arm piece that will actually be two parallel arms that will grip the pulley on top and bottom in order to brace the pulley from off axis torque from the timing belt.

I am kind of at a lost as to how to mount all of these together. I would like to mount the forearm directly to the pulley and then the two parallel arms (comprising the upper-arm) sandwich the top of the pulley and the lower part of the forearm. This would be attached using a turn table. Any ideas on how a shaft would mount to these? Or how to attach the pulley to the arms themselves?

Any kind of direction or links would be greatly appreciated, I don't even know the names of the parts I would be looking for.

In this ASCII art model the dashed lines (-) are the arms. The arm on the left is the forearm and the two arms on the right are the two parallel parts of the upper arm. The stars are the belt and the bars (||) are the pulleys at the elbow |E| and shoulder |S|.

Here is a picture of the design to help you visualize: 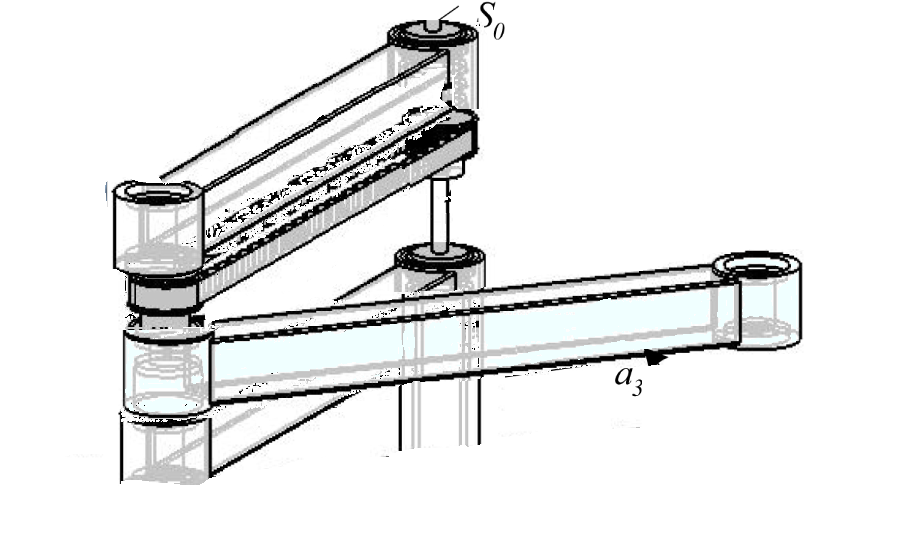 This looks very much like a simplification of a traditional SCARA robot design.

The normal nomenclature for these joints are that the upper arm is between the shoulder axis and the elbow, so that is what I will call these joints below.

If you want the elbow pulley to turn the lower arm then you need to use either a fixed shaft or drive shaft:

The shoulder joint has similar options, but is complicated by the fact that you not only need to transmit torque to the lower arm, but you also have to turn the upper arm too. Now you have several options:

It is this extra complexity which is why a single heavier duty upper arm might be preferable to increasing the strength of the upper arm by doubling up two lighter arms which are allowed to move (slightly) independently of each other.

Another alternative to remove the need to transmit the elbow torque through the shoulder axis is to mount the lower arm motor on the upper arm. Thus you can treat upper and lower arms as mechanically independent systems, and your design decision for one won't have ramifications for the other.

1
Pan and tilt bracket for a stepper motor

3
Linear slider motor mount location - Pros/cons
2
What kind of torque is needed for a small 5-6 axis robotic arm?
3
Determining the graspable range of a robot arm
1
Which kind of motors and how powerfull should they be for a robotic arm
5
2DOF arm with quick movement: Stepper, servo, or DC motor?
2
What is the torque/force required to rotate the base of a robot arm?
2
Stepper Motor: Direct Drive vs. Belt Drive vs. Geared Stepper Motor
2
Servo Starts Oscillating Under Disturbance