I would like to filter angular velocity data from a "cheap" gyroscope (60$). These values are used as an input of a nonlinear controller in a quadcopter application. I am not interested in removing the bias from the readings.

Edit: I'm using a l2g4200d gyroscope connected via i2c with an Arduino uno. The following samples are acquired with the arduino, sent via serial and plotted using matlab.

When the sensor is steady, the plot shows several undesired spikes. 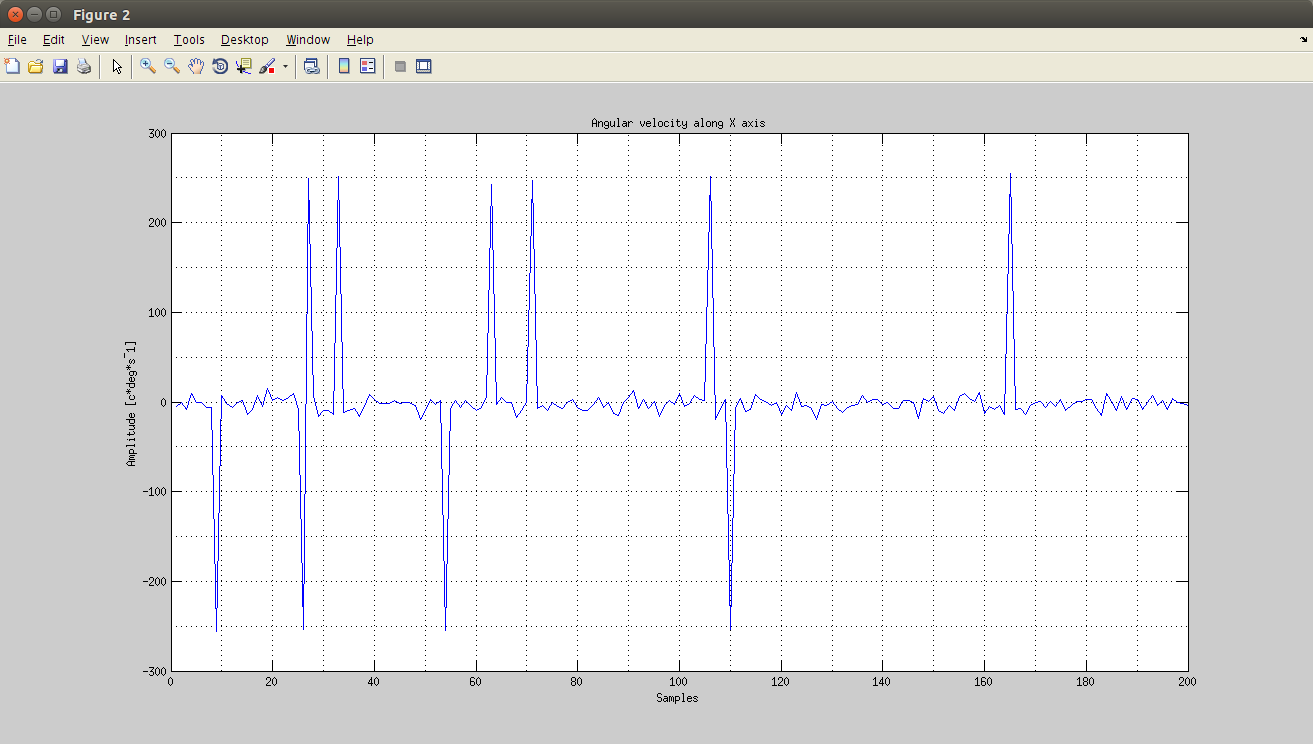 How can I filter these spikes?

Let's consider the following samples in which a couple of fast rotations are performed. Let's assume that the frequency components of the "fast movement" are the ones I will deal with in the final application. 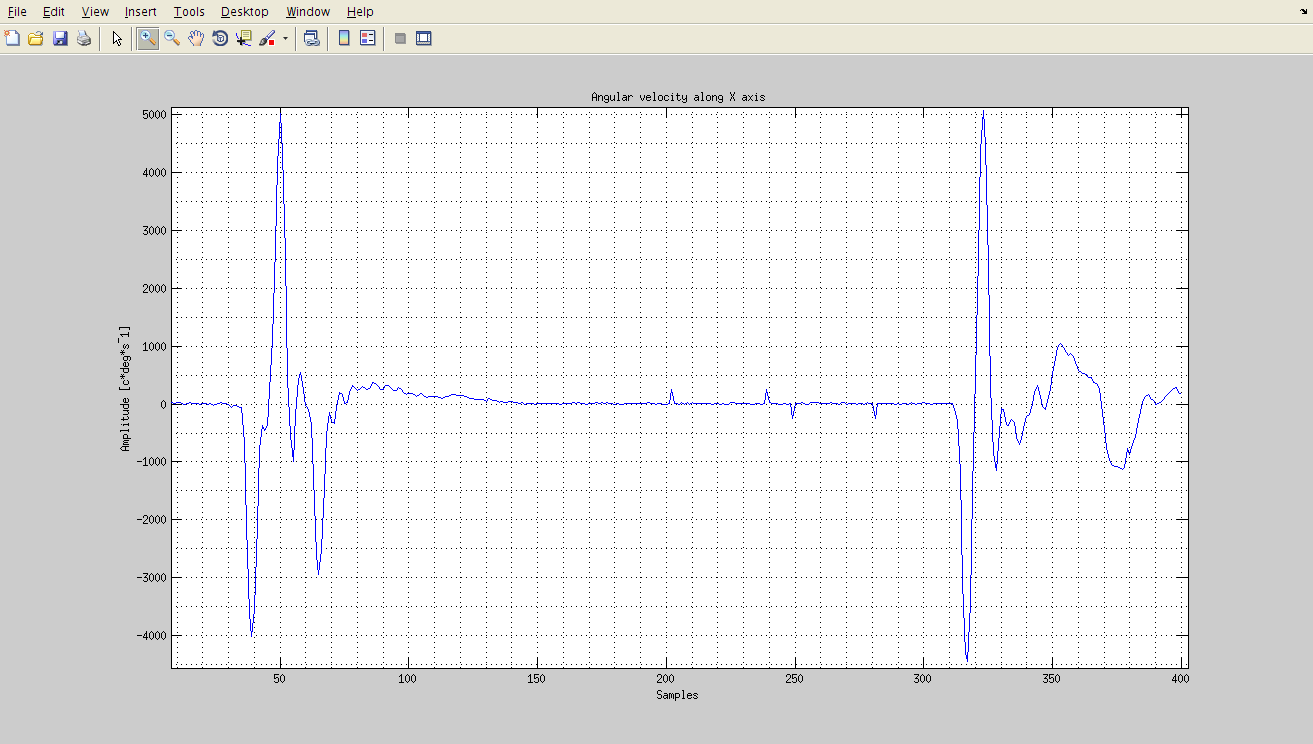 Below, the discrete Fourier transform of the signal in a normalized frequency scale and the second order ButterWorth low pass filter. 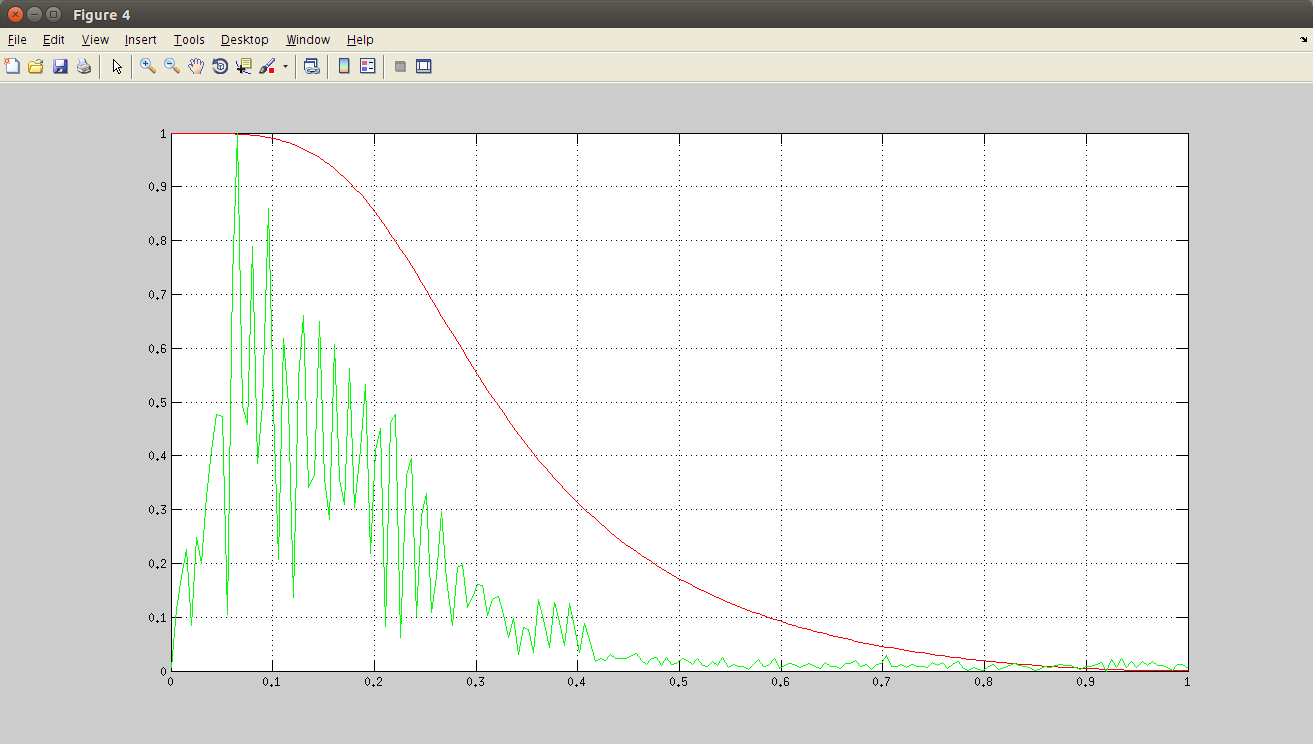 With this filter, the main components of the signal are preserved. 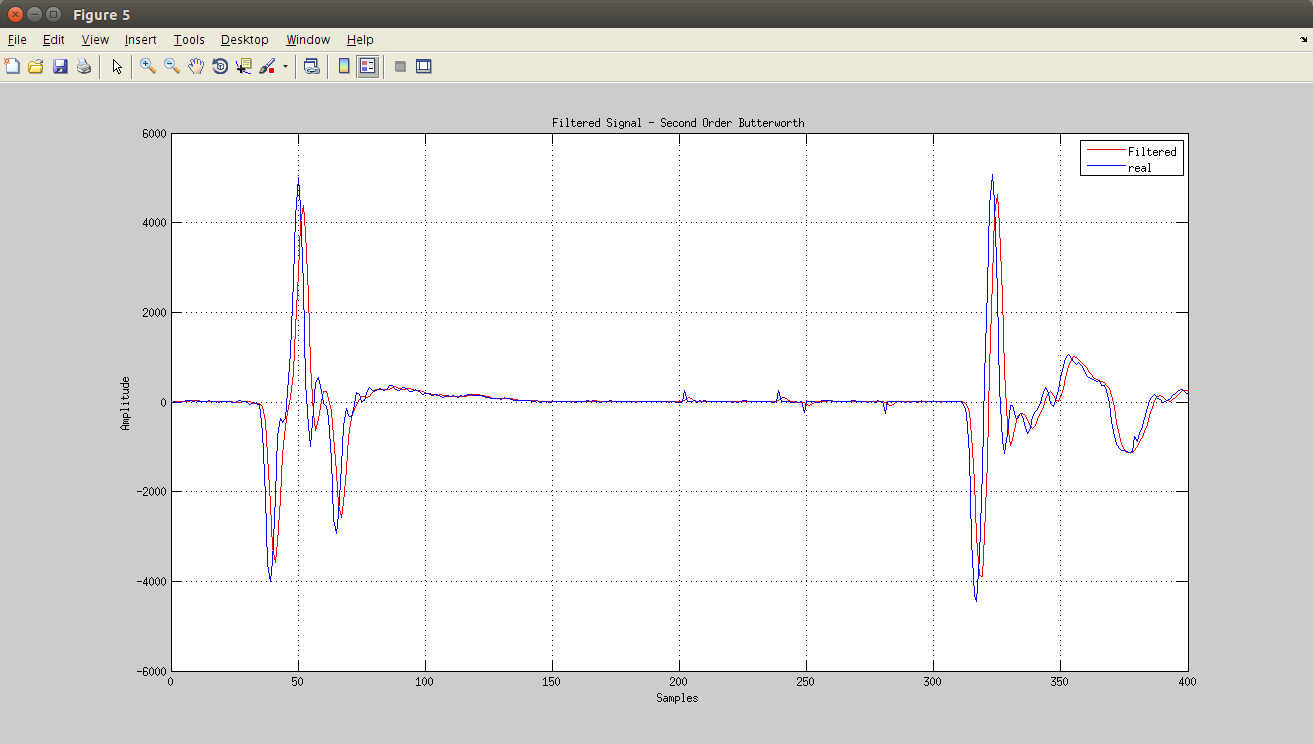 Although the undesired spikes are attenuated by a factor of three the plot shows a slight phase shift... 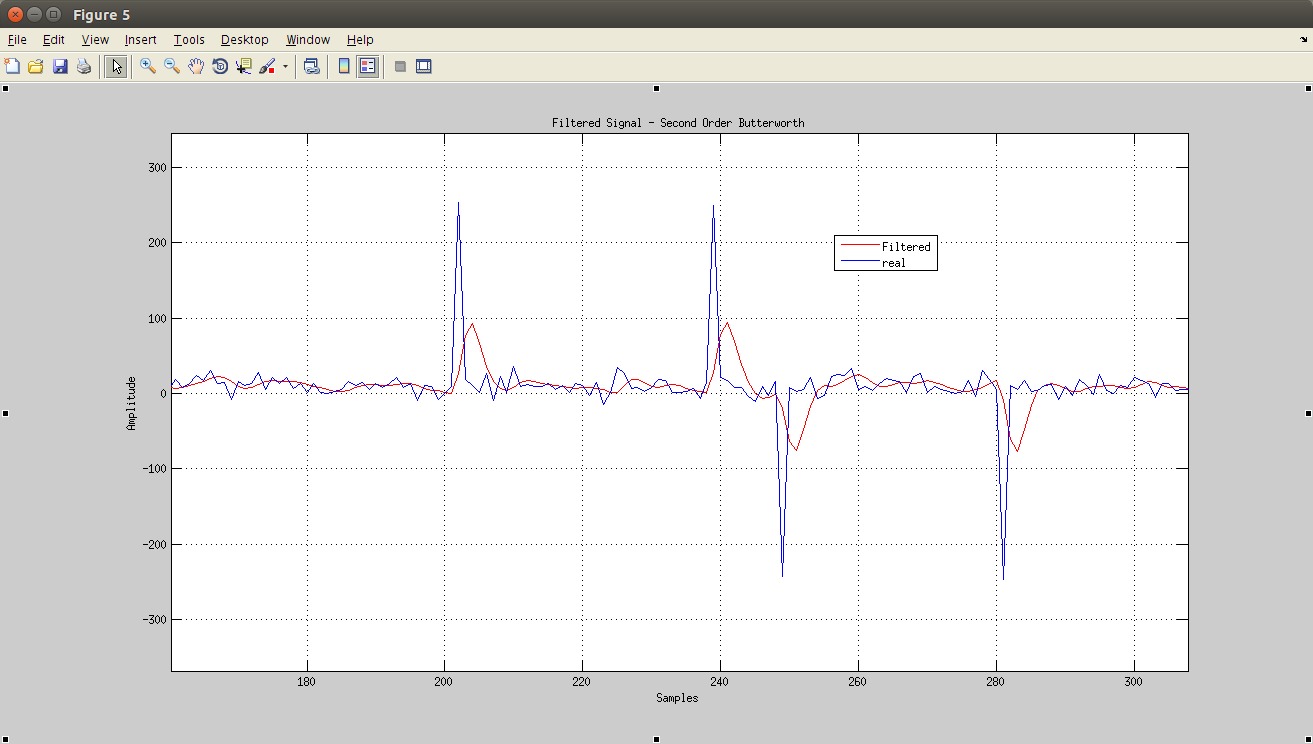 And the spikes are still present. How can I improve this result? Thanks.

1./2. I am using a breakout board from Sparkfun. You can find the circuit with the Arduino and the gyro in this post: Can you roll with a L3G4200D gyroscope, Arduino and Matlab? I have added pullup resistors to the circuit. I would exclude this option because other sensors are connected via the i2c interface and they are working correctly. I haven't any decoupling capacitors installed near the integrated circuit of the gyro. The breakout board I'm using has them (0.1 uF). Please check the left side of the schematic below, maybe I am wrong. 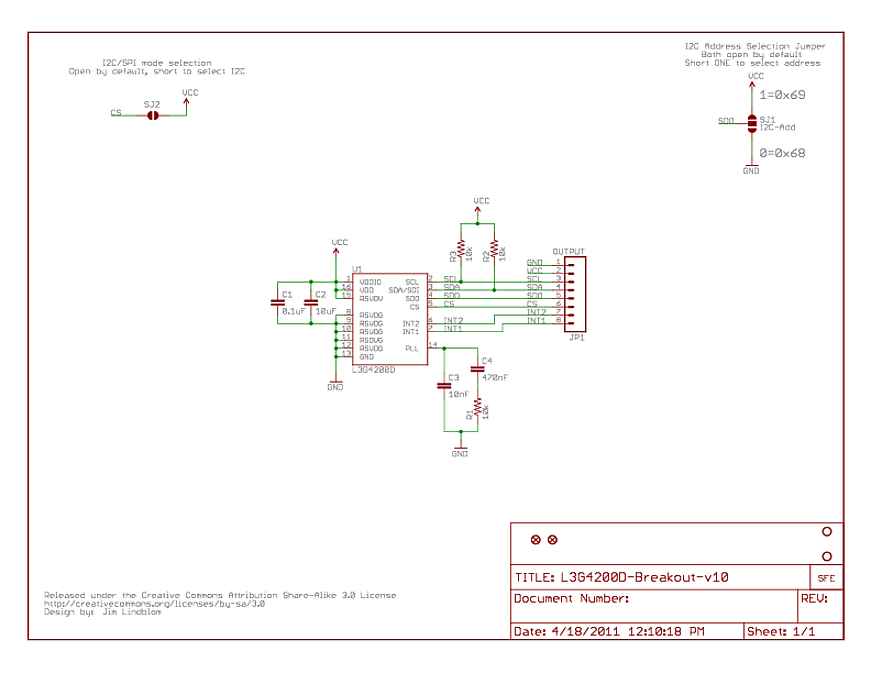 Motors have a separate circuit and I have soldered all the components on a protoboard.

I found other comments on the web about the same breakout board and topic. Open the comments at the bottom of the page and Ctrl-F virtual1

Did you try out median filtering?

This nonlinear technique is suitable to counteract the presence of spikes while preserving the high frequency content of the input signal.

You gave the part number and protocol, but

I ask because the spikes seem too large to be "just" noise. My thoughts on troubleshooting would then be to address whatever the underlying cause of the spikes is rather than trying to filter them out of the output. Potential issues I can think of are related to the questions I'm asking, so for each question I ask I'm thinking it could be:

I would guess it's probably a supply voltage issue, either to the chip directly or on the communication line, but again, they're all shots in the dark without more information.

From a link OP posted, there was this comment/answer:

What did work was setting it to read both the A8 and the 28 registers, then compare them. If they differ, read them again! Seems to have solved 100% of my glitching. Now I can get on to calibrating in peace.

This, coupled with other users that have similar issues, would leave me to believe it's a defective chip design. If you evaluate the data and the least significant byte is, in fact, always 255 when you get this glitch, then you could always just check for that condition and either ignore that sample or substitute the previous reading for the current reading, or do what is suggested above by 'virtual1' on the other site. I would avoid setting it to zero because this may cause "inverse glitches" if you get that spike while there is actually valid data.

One of the options is to utilize the exponential moving average. The below picture shows data corrupted by Gaussian noise with zero mean and 0.4 variance and how the filter does a good job to remove the spiky noisy data. 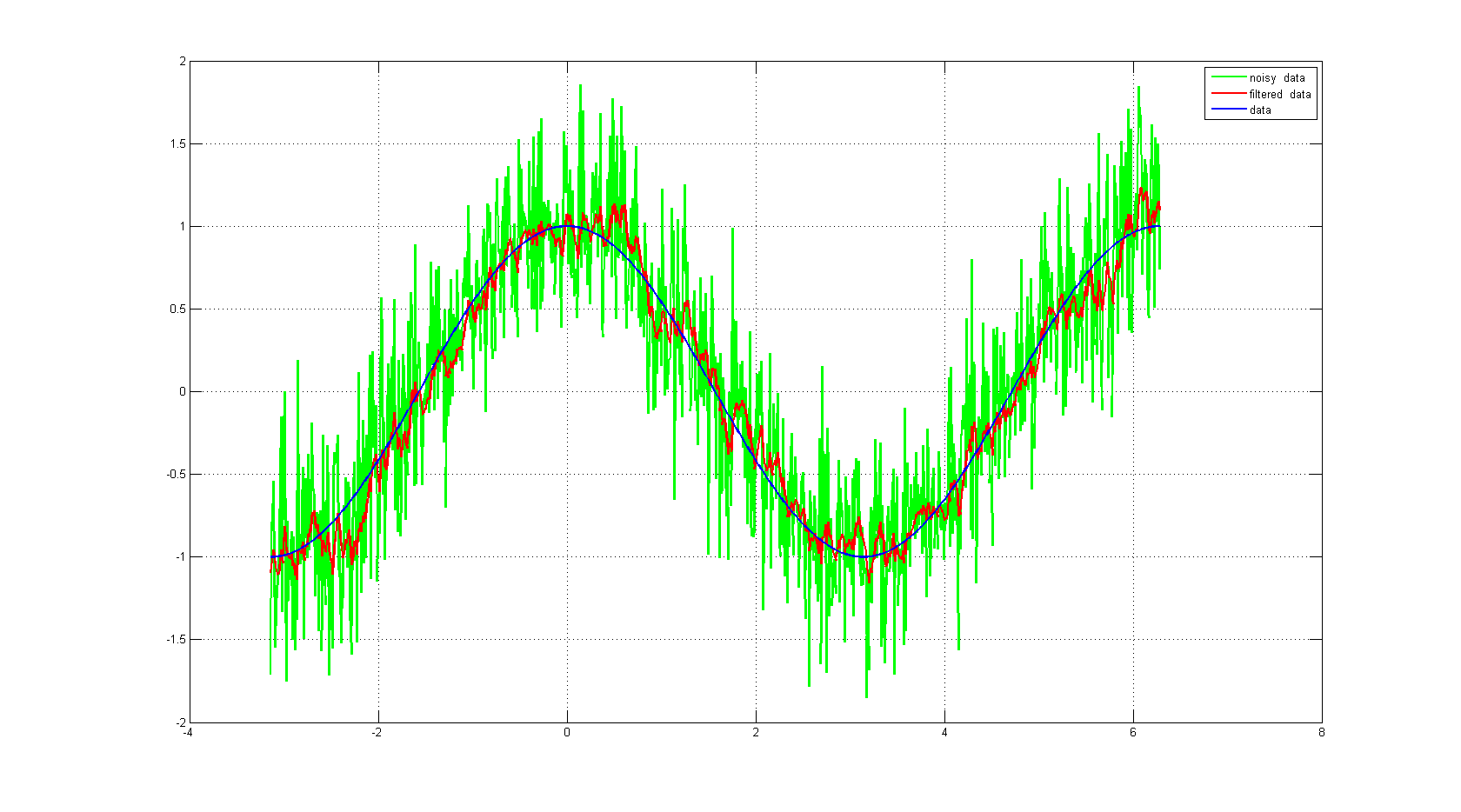 Another choice is using Kalman filter. It is an optimal filter if you meet the requirements which means no filter can perform better than the Kalman. Unfortunately, the filter imposes some constraints on the signal such as linearity and Gaussianity. Moreover, the system must be described precisely.