This question is a follow on from my previous question, Overheating/Jamming MG996 servo.

I have recently purchased my first ever servo, a cheap unbranded Chinese MG996R servo, for £3.20 on eBay. 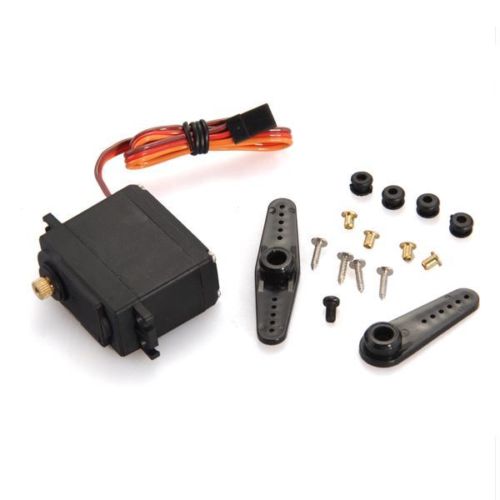 After mounting the servo horn and the bracket, I realised that I had not mounted the horn in a tout a fait 0° orientation, rather the angle between the bracket and the servo side was approximately 20°. However, after switching the servo on and off a couple of times, with each time allowing the servo to perform, say, about 10 sweeps each time, I quickly noted that the servo’s extreme positions were changing over time, so that the initial extremes and then the extremes after about 5 on and off cycles, had changed by about 15°, so that now, 0° and 180° the bracket is now parallel with the body of the servo.

I was quite surprised at this, as I had assumed that the 0° and 180° positions would be fixed, and not change over time, or vary each time that it was switched on and off.

Seeing as there should be a stop peg on the gear connected to the potentiometer inside, how is this even possible?

Is there anything with a weight (actually moment of inertia) connected to the servo? If so, it might be that the plastic "mounting" part is slipping with respect to axle. Axle shouldn't ever be changing extremes.

Not the answer you're looking for? Browse other questions tagged rcservo or ask your own question.

3
What approaches should I consider to create rotating a turret
4
Pulse Position Modulation as used in RC controls
1
Finding the position of a servo
9
Can RC servo motors continually rotate?
4
Overheating/Jamming MG996R servo
3
How can I use an RC servo to rotate more than 360 deg and still maintain positional accuracy?
1
How should I power my servo motor with the Adafruit PCA9685 chip?
0
digital servo won't seek to angle if delta between current position and target is more than ~15 degrees