I was wondering whether maybe you could help me with this problem. I have a double pendulum. I have set the origin of cartesian coordinates to be the "head" of the first arm, which is fixed. The end of the second arm is attached to a block that slides along the x-axis. What I want to do is to derive the equations relating the pendulum's angles with the distance from the origin to the block.

Now, I know how I could go about deriving the equations without the constraint.

Where $x_1$ and $y_1$ is where the first arm joins the second arm and $a_1$ is the angle between the horizontal and the first arm.

Now then, if I attach a sliding block to the end of my second arm, I don't know whether my equation for $x_2$ would change at all. I don't think it would but would I have to somehow restrict the swing angles so that the block only moves along the x direction?

Well, basically the problem is finding the equation of $x_2$ if it's attached to a block that only moves along the x- direction.

What you are describing is a crankshaft.

if I attach a sliding block to the end of my second arm, I don't know whether my equation for $x_2$ would change at all.

No it wouldn't, because your restraint:

Take a look at the following image: 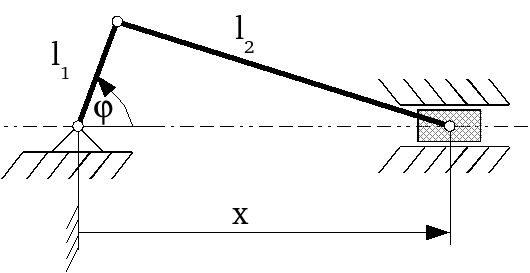 The formula for the relation between $x$ and $\varphi$ in the image is:

The relationship between the two angles can be derived from their shared opposite side in their respective triangles:

Not the answer you're looking for? Browse other questions tagged forward-kinematics or ask your own question.