Can anyone please explain me these lines found on page 5 of Kinematics Equations for Differential Drive and Articulated Steering by Thomas Hellström?

Note that plugging in $r$ and $v$ for both left and right wheel result in the same $\omega $ (otherwise the wheels would move relative to each other). Hence, the following equations hold: 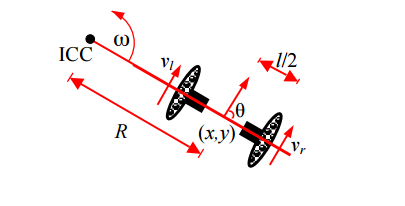 Figure 6 . When left and right wheel rotate with different speeds, the robot rotates around a common point denoted ICC My questions are:

Recall that for a circle with radius $r$, the circumference $u$ (that is the arc length of the "curve") is given as:

Further recall the definition or radians, which is something along the lines of:

If a rope of length $r$ is placed on the circumference of a circle that has the radius $r$, the rope will "cover" a certain angle. This angle is 1 radian.

The following awesome animation from the wikipedia article on radian covers this better than my words:

You can now see how both are somewhat similar: If you multiply the angle $1 rad$ with $2\pi $, you also get a rope length of $2\pi r$. Now this rope length is exactly the same as $u$.

We can therefore conclude:

The $2\pi$ in the formula for the circumference $u=2\pi r$ corresponds to the covered angle of the circle. A full circle is $360°$, which is equivalent to $2\pi $. Let's call this angle $\omega$ and write the formula again, with that angle:

The wikipedia article about the arc length of a circle comes to the same conclusion.

You can calculate any arc length given any angle. For example, half a circle, with an angle of $180° = \pi $ has (obviously) half the circumference:

Or one third of a circle has this circumference:

I mixed the terms circumference and arc length within my answer on purpose. If you think of the circumference as a length you can imagine that it's a distance that you can walk along. More precisely: drive along, because your robot has wheels.

Each wheel covers a certain distance, $v_r$ and $v_l$ respectively.

If $v_r \neq v_l$, the robot moves on a circle as seen in your image, with center $ICC$ and radius $R$. Each wheel is on its own circle with a different radius:

If the robot drives around in that circle with center $ICC$ and radius $R$ by an angle of $\omega $, the relationship between the distances travelled by each wheel are the formulas that you found in the book:

$v_r$ and $v_l$ are the arc lengths of the circle that the wheels are driving on and $\omega$ is the angle that the robot goes around the circle.

The important thing to understand: The circle is just a geometric aid to describe the motion of the robot, which exists because it's easier to handle and understand. It's really just another way to describe $v_r$ and $v_l$, but those two values are hard to imagine and depending on the wheelbase $l$, they could describe different motions.

Thinking in terms of a circle is a lot easier than to construct the motion from $v_r$ and $v_l$.

Why ω has to be same if we want to analyse the behavior after changing the wheel velocity relative to other?

How do we know about the circle, in which the robot rotates by doing variations in one wheel velocity, surely passes through the center point between two wheels.

Because that's the way the geometry works out. Both wheels are on circles with different radii ($R\pm \frac{I}{2}$) with the came center $ICC$, but they have a fixed relation to each other, so the center of the robot must be on a circle with radius $R$.