Which joints to discretize for IK

I am using ikfast in OpenRave for my inverse kinematics. This is an analytical solver, so if your robot's DOF matches the IK type's DOF, then you get all possible solutions. But if your robot has more DOFs, then you need to pick some joints to have a constant value. (However, if you use OpenRave's Python interface it will discretize that joint for you. i.e. give you a set of solutions for every 0.1 radians of that joint. But my question holds for either interface.) I have a 7 DOF anthropomorphic arm with joints: Roll-Pitch-Roll-Pitch-Roll-Pitch-Yaw as seen in this image: 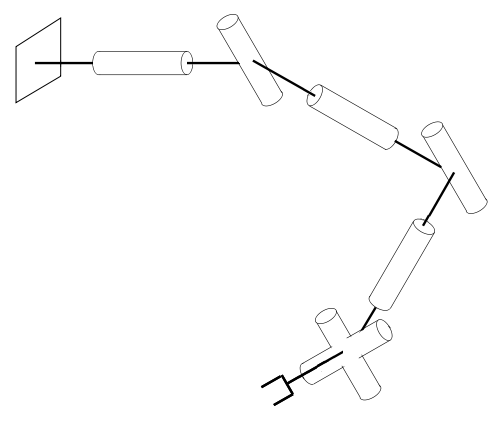 The discretized joints are call "free joints" in OpenRave's terminology. If I let ikfast decide, it picks joint 3 (upper arm roll) to be the free joint. However, I have been using joint 4 (elbow) to be the free joint because it is easier for me to think about. But then I realized that perhaps joint 5, 6, or 7 would be better to discretize because they are closer to the end of the chain. Won't the IK solutions suffer if joints closer to the start of the chain have a large discretization? Or is OpenRave picking the optimal joint to discretize?

I was just wondering if there is some standard practices or known conventions for this sort of thing.

Put simply: I want a set of IK solutions for the end-effector at some pose. I will fix a joint either near the start or end of the kinematic chain. And what i set it to isn't going to be perfect. Lets say it is off from some "ideal" position by some epsilon. Now you can imagine that if i want the hand in-front of the robot, and I pick a bad angle for the shoulder (like straight up for example), the rest of the joints will have a hard time getting the end-effector to the target pose, if at all. But If I fix the wrist to be at some awkward angle, there is still a good chance of getting the end-effector there, or at lease close. What kind of trade-offs are there? Which will have a "better" set of solutions?

Which will have a "better" set of solutions?

I could think of some requirements so "better" becomes a measurable value. A better solution:

That list is probably incomplete. As you see, there is a lot of maybe, could, should, probably, in this answer. I guess that a lot of these points are not even worth considering, but then you might have an application that does have very strict requirements.

Depending on the available computational power and time you have for the IK calculation, run the algorithm for every joint. You can then compare different solutions depending on your requirements. Give each requirement a weight so each solution has a certain score, pick the solution with the highest score.

Rosen Diankov answered this question for me in a separate thread:

That's an excellent question, and actually very difficult to answer. The general rule of thumb is that the closer it is to the end effector the better, but this is not always the case. For example, there's only one set of 3 intersecting axes and that's the final 3 joints, then choosing a free joint at the end will mean the resulting IK solver cannot exploit the 3 intersecting axis property to simplify the IK.

So I have some experience with kinematic models, but I'm by no means an expert. What do you mean you are "discretizing" a joint? From the documentation you linked:

So what I'm not sure about is what you mean by "discretizing". As I read their documentation (I couldn't seem to find an in-depth guide at a glance), and as conceptually makes sense to me, you must fix the extra joints, and you must fix them at whatever "arbitrary value" you chose when configuring the IK solver.

It sounds like the IK solver is returning closed solutions to the inverse kinematics. How can you expect it to account for a motion you don't model, or a joint position/location that's incorrect because your "arbitrary value" doesn't match how it's actually configured?

Can you link to documentation that shows a procedure for discretizing a joint? I didn't see anything on a preliminary search.

I'm assuming this is related to your other question, I think my advice from there still stands - measure your physical robot and check that it matches your model. In this case, with the information you gave, I would look squarely at whatever joint you dicretized and check that it is both fixed and in the orientation you gave in the IK model configuration.

Not the answer you're looking for? Browse other questions tagged inverse-kinematics or ask your own question.

10
Why do we generally prefer DH parameters over other kinematic representations of robot arms?