I am trying to control the velocity+position of a linear actuator.

At this moment I am able to control the position or the velocity. But I'm trying to control both. What the control has to do: Let the linear actuator drive to a position i.e. 0 to 100 cm with a constant velocity of 1cm/s.

I control the actuator using a PWM signal. And I measure the velocity and position using a position sensor on the shaft. 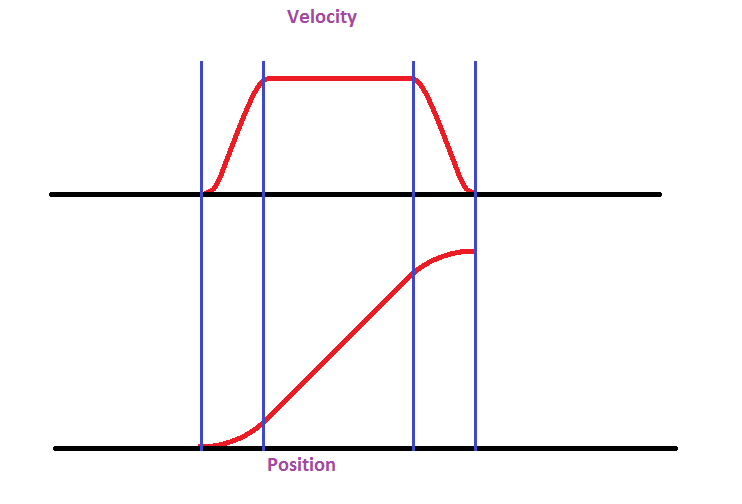 I want a Velocity controlled Position controller. Hopefully this will make it clear

My first try is with a trapezoid wave. Maybe there is an easy way without to much calculation power to change it a s-curbe. Then the accelartion/jerk will be alot smoother. I let the microcontroller calculate 3 different formulas afterwards it will calculate it using loop iteration. This way I can use one PID for the position. The parameters in the following code will fictional:

A big problem with the code above is that the amount of accelartion loops is a constant. It can not be changed except when you already know the amount of loops it will take.

I will be using two separate arduinos, they will be connected using a CAN-bus connection. Anyway, they won't communicate through it unless the load becomes too high. This will make Master/Slave impossible. Also the system has to be modular: adding another actuator to circuit won't be a problem. The actuator is speed controlled by using a PWM signal. The linear sensor will deliver a 0-10v signal which i will reduce to 0-5v by a simple voltage divider. The loop will be around 5 to 10 ms, will depend on the maximum looptime.

Arduino has a 10-bit(1023) ADC but use of oversampling I will probably try to increase it to 12-bit. To not decrease the reading speed I will decrease the prescaler of the ADC.

The PWM output is 8-bit(255), I am trying to find a way to further increase. Because I think 255 steps are too low for my application.

Because the Arduino has limit internal memory, pre calculating all the positions is impossible.

Thank you all for the help so far!

The first thing to realise is that this is not a control problem, this is a planning problem. If you conflate the two, you are making life much more complex than it needs to be.

The traditional way to achieve what you want is to have two loops. The outer planning/supervisory loop generates way-points for specific points in time, while the lower level PID loop generates the appropriate PWM signals to keep the motor as close as possible to those way-points.

The more way-points you generate, the more closely you can track both velocity and position. Older systems often ran their floating point planning loop at a much lower rate than their integer PID loop, but these days even modest micro-controllers have more than enough compute power to do full trajectory planning of multiple axes at the PID control rate.

While the example you drew is an s-curve trajectory profile, it is easier to explain the principles by looking at a simple trapezoidal profile.

Let's say you want to move from 0 to 36mm in 9 seconds with cruise velocity (feed rate) of 6mm/s and an acceleration of 2mm/s/s. You might plan a move in 9 steps as follows:

In this case, at time $t=0$ you would inject position $d=1$ into your PID (plus acceleration $a=2$ and velocity $v=1$ if your PID loop has acceleration and velocity feed forward). At $t=1$ you would inject $d=4$ into your PID and so on until at $t=8$ you command the PID to move to the final position $d=36$, then at $t=9$ the system should have stopped moving.

The limitations of your system will limit your implementation.

If you find that your actuator jumps between way-points rather than moving smoothly, then you need to either reduce the time between way-points or optimise (tune) your PID loop for your motion (for example, reduce the proportional gain, increase derivative gain and/or increase the velocity/acceleration feed-forward gains). The moment you start using your PID loop to tune for expected motion however, you are making the motion worse for other kinds of move.

I see from comments that you want two linear actuators to match each other.

In this case, while the PID loops for each actuator will need to be run independently, the way-point inputs into those PID loops can be shared.

How closely each servo loop follow each other will be determined by how closely they follow the idealised trajectory as defined by the way-points.

If your individual PID loops are tuned well enough, and you set sensible limits on following error, the overall error between the two actuators should be at most the sum of their following errors, and is likely to be much less on average.

By the way, my experience on this comes from writing the control software for a 2x2m dual gantry cartesian robot. Even though we were accelerating the gantries up to 1m/s at 1g, we rarely had a following error of more than a few hundred microns, & the error between the two ends of the gantry was usually an order of magnitude lower. If we had used s-curve rather than trapezoidal move profiles, our errors would probably have been an order of magnitude lower still, but this was the 90's and micro-controllers had much lower floating point performance, so we went for simple & fast over complex & slow.

I'd say this problem is very much similar to The aerial refueling problem: sketch of a feedback controller whose one possible solution is then explained in https://robotics.stackexchange.com/a/5263/6941.

The minimum-jerk position profile (i.e. the s-curve) that lets the system go from the initial position $x_0$ to the desired position $x_d$ in $T$ seconds is:

where $t \in \left[0,T\right]$ specifies the time granularity, thus the number of set-points.

Finally, $x\left(t\right)$ will be the reference for the position PID.

Code for S_Curve generator in MATLAB

Base on Ugo Pattacini answer:

I don't think you can control speed and position at the same time - what happens if you don't change the position reference but you have some non-zero speed reference? Did you want the output to stay still or go to the command speed?

I think what you are looking for is a software-imposed actuator authority limit. In this case you can just limit the output of the controller. I don't know what your actuator inputs are, but for the controller I would try something like:

Now, as I mentioned, I don't know what your inputs to the actuator are. The model above assumes the output of the PID controller is a reference speed that you pass to the actuator. You cap the speed reference you pass to the actuator giving an electronic form of actuator saturation. The controller will continue to command higher and higher velocities until you reach a position close to the reference position, at which point it will begin to back off. It will back off below the outputLimit at which point the electronic saturation eases and control resumes like normal.

If your actuator uses a position input and it determines its own speed response, then the actuator probably uses a proportional controller, where the actuator speed it utilizes is given by:

Despite the fact that this question has been marked as answered (and I've been downvoted!), I would add that you could split the controls.

As with any other PID controller, you can tune the slave to whatever threshold you want to achieve your desired speed difference tolerance.

Not the answer you're looking for? Browse other questions tagged arduino pid microcontroller or ask your own question.

6
PID with position and velocity goal?
5
The aerial refueling problem: sketch of a feedback controller
1
Iterative calculation of trajectory