I'm building a hobby 6-DOF robotic arm and am wondering what the best way is to communicate between the processors (3-4 AVRs, 18 inches max separation). I'd like to have the control loop run on the computer, which sends commands to the microprocessors via an Atmega32u4 USB-to-??? bridge.

My main considerations are hardware and firmware complexity, performance, and price (I can't buy an expensive out-of-box system).

The communication you choose will depend on a number of factors:

Almost all options have built-in support on the AVR microcontroller. There is no option you might reasonably prefer over the built-in options which would require additional hardware. Because they have built-in support, the software complexity is all similar, in that you just configure the port (using registers), put the data to transmit in another register, then trigger the transmission by setting a bit in another register. Any data received is found in another register, and an interrupt is triggered so you can handle it. Whichever option you choose, the only difference is the change in register locations, and some changes to the configuration registers.

A USART loop has the following features:

Note: this is also what you would use to get RS232 communication, except that because RS232 requires 10V, it requires a driver to get those voltage levels. For communication between microcontrollers, this is not useful (only voltage levels are changed).

CAN is not supported by the AVR microcontroller you have specified. As there are other good options, it is probably not important in this case anyways.

The recommendation is SPI, because it is fast, the wiring isn't too complex, and doesn't require fiddly pull-up resistors. In the rare case where SPI doesn't fully meet your needs (probably in more complicated networks), you can use multiple options (eg. use both SPI ports, along with the two-wire interface, as well as pairing some of the microcontrollers using a USART loop!)

In your case, using SPI means that naturally, the microcontroller with the USB connection to the computer can be the master, and it can just forward the relevant commands from the computer to each slave device. It can also read the updates/measurements from each slave and send these to the computer.

At 8MHz, and 0.5m wire length, I don't think it will become a problem. But if it is, try be more careful of capacitance (keep ground and signal wires getting too close, and also be careful of connections between different conductors), and also signal termination. In the unlikely event that it remains a problem, you can reduce the clock rate, but I don't think it is necessary.

I can highly recommend CAN for inter processor communications. We use it in our robots, with up to 22 processors on the same bus. With good protocol design, you can use up about 90% of the available bandwidth (about 640kbps when you take into account all of the error checking and inter frame spacing). We're able to servo 10 motors at 1000Hz on one CAN bus. This is approaching the limit. You could probably squeeze it to 20 motors if you pack the data very carefully.

Generally CAN needs to have one transceiver chip for each processor (it's just a little 8-pin device). The transceiver gives you the nice differential signal which emits very little interference, and also makes it immune to interference if you're working in an electrically noisy environment (motors, solenoids, and radio transmitters). 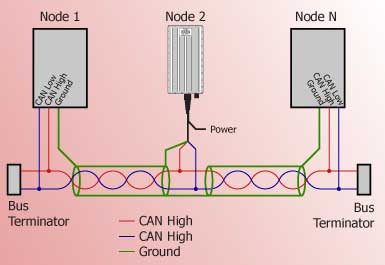 However, in limited circumstances, it's actually possible to use CAN with no transceivers.

If you ever feel like implementing a bus with serious bandwidth, I suggest you try EtherCAT. It's a 100Mb bus, which can be connected to your PC's Ethernet port. There are two important parts to the bus:

The PC can transmit and receive large chunks of data to and from the nodes at 1kHz or faster. You can control quite a lot of stuff on a single EtherCAT bus.

Shadow Robot Company now sell a useful EtherCAT Bus system called Ronex. It lets you add quite a lot of I/O, and they're going to be introducing lots of other types of board soon, like motor controllers, and high quality ADCs.

I know I'm digging up an old thread and this is sort of off topic, but I don't think you can just get hold of ET1200 chips from Beckhoff. I emailed them a little while back and was advised that I need to join the Ethercat group. To do this I had to demonstrate that I was going to contribute back to the group - ie, by building and selling devices that used the Ethercat stuff. At that (and this) point in time, I am still prototyping my device (a brushless motor controller for robot applications - currently using CAN) so I could not offer anything (I cannot give a solid time for completion - Im still working on my undergrad). I expressed to them my disappointment. They said not to be disappointed!! Pretty funny stuff! I would really like to get into Ethercat, but the ASICs seem to be untouchable to hobbyists or those without a company. Also, this is my first post, so apologies if I have angered the gods by digging up an old post!

Not the answer you're looking for? Browse other questions tagged microcontroller electronics communication robotic-arm or ask your own question.