i am working on my master's thesis about design and construction of universal robotic arm. Goal of my work is to design 5 DOF robotic arm. Something like on the picture: 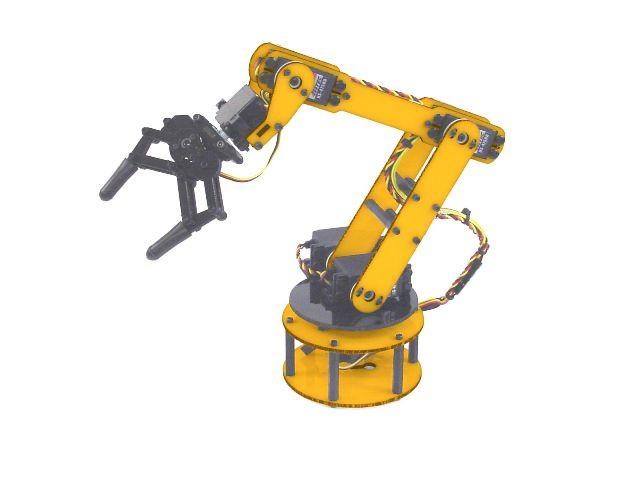 I need it to be able to lift a weight about 5kg. It has to move in "action radius" 1m. Rotation speed should be about 1m/s. The conclusion of my work should be like: "You can buy ABB robotic arm or you can but this..it can lift that much, can turn that speed and weighs that much". Basic construction should be done too. Maybe with some simulation.

First of all - i picked really bad master's thesis for me, i know that know. Second - i have like month to finish it. I would like to ask someone how to proceed. I know that first step is to pick servos/actuators/gearboxes, but which one? What is realistic weight of the whole arm which should lift another 5 kg of weight? How strong motors should i pick or with what gearboxes?

Is anyone able to help me via maybe emails?

To answer your questions about the motors/gearing:

This is far above the torque of most model servos, so forget them; robots of this sort of performance generally use a specialist motor, much more than 12V and a purpose built gearing arrangement that probably more costly than the motor. (Often harmonic drives, though a more conventional spur gearing arrangement will work for less performance and more backlash.)

Motor power to get a reasonable speed can be calculated from the torque and the rotational speed you're designing for - at least several hundred watts. This would assumes the arm itself has zero mass by the way, so would be a wild underestimate.

Actual weight is impossible to estimate without first making an initial mechanical design; it depends where the other motors are located and how heavy they are, since the robot must lift its own weight. Robots I've learned on in the past (very old PUMA robots, quite well known) are far heavier than the 5Kg payload you want to lift; maybe 30-50Kg or so for the whole arm and rotation axis?

(This is much more than a month of work, I'm sorry to say.)

Not the answer you're looking for? Browse other questions tagged otherservos actuator robotic-arm or ask your own question.

9
Building Robotic arm joint
1
Connecting multiple servos to a robotic arm
1
Building industrial-like robotic arm
3
Choice of a motor for robotic arm
2
What kind of torque is needed for a small 5-6 axis robotic arm?
5
Dynamic torque simulation for a 6 DOF robotic arm
1
Does increasing robotic arm's speed cost replayability?
1
How to determine actuator and process for PID, and how to intepret the output