I have a 4-DOF robot arm system with 4 revolute joints arranged in an open-chain fashion like below: 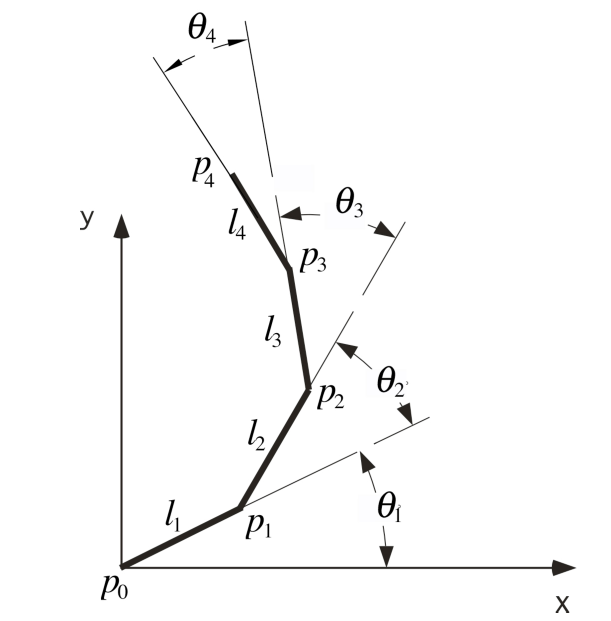 What I am trying to do is calculate the center of mass Jacobian matrix of the arm. I found some related materials online Center of Mass Jacobian.But I am still not very sure about how to calculate it. Could anybody give me some hint? Thanks!

The method you mention from elysium-labs is perfectly functional. I try to clarify it a little bit and I give you some C++ like code.

Let me start by recapping on jacobian matrix itself: Jacobian matrix relates the joint rates to the linear and angular velocity of the end-effector (EE). In other words, jacobian expresses the contribution of each joint velocity to EE velocity. There are basically two ways of calculating jacobian: Analytically and Geometric. Analytical jacobian is partial derivatives while geometric jacobian is based on geometric interpretation of motion. 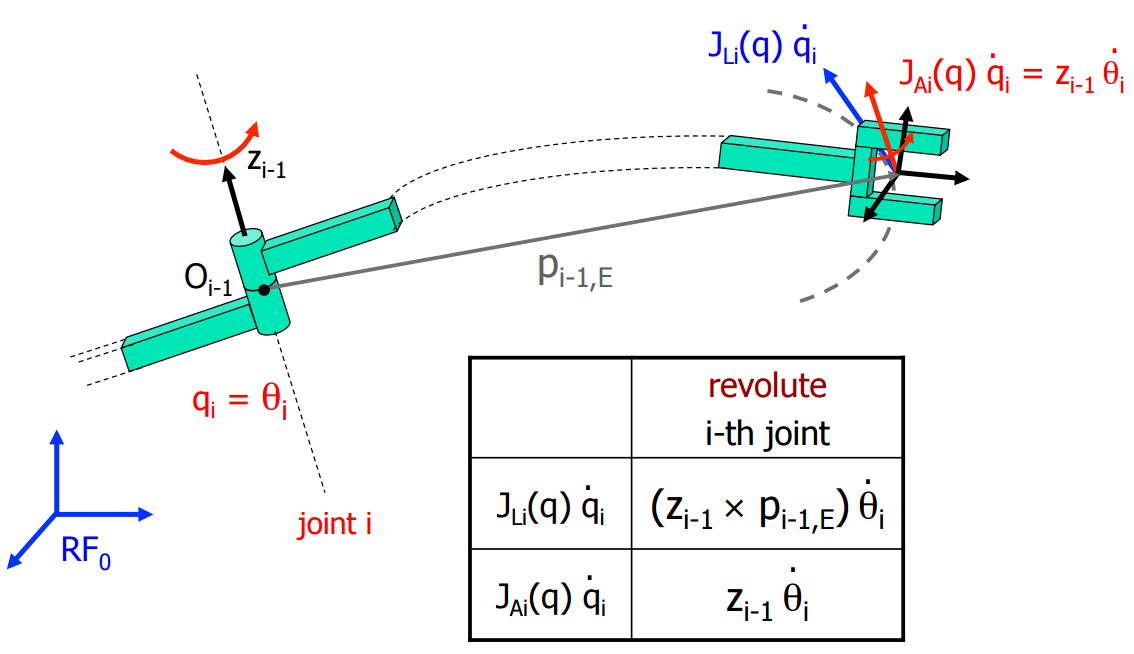 The upper row shows the contribution of each joint to the end-effector velocity and bottom row for the angular velocity. $P_i$ and $z_i$ are position and orientation of the joint, extracted from Denavit Hartenberg parameters. '$\times$' is cross product operator.

When calculating the CoM jacobian, we do not consider the end-effector. In other words, you must calculate the contribution of each joint movement to the velocity of the center of mass.

First, you need to calculate the partial CoM, i.e., the CoM of each kinematic chain w.r.t the base. For example, partial CoM if you consider only $l_1$, then only $l_1, l_2$, then $l_1, l_2, l_3$ and so on. The rational is that $\theta_1$ has a bigger contribution to CoM velocity comparing to $\theta_4$. Now that we have all the necessary information, we calculate the geometric CoM jacobian, similarly to the kinematic jacobian:

In the above code, "Note that we had to rotate the partial COM to get it into the base links coordinate frame", hence $R_0$. Furthermore, "the resultant linear velocity should be scaled by the mass of the partial COM because the COM is the average of the multi-mass system and high velocities on smaller masses play a lesser role on the total velocity of the COM."

In my code, I was interested in linear velocity only and that's why CoM jacobian is $3\times n$.

A good source for understanding the concept of jacobian, its geometric interpretation, and the notation that I've used in this answer, is this set of slides.

Not the answer you're looking for? Browse other questions tagged robotic-arm jacobian or ask your own question.

7
How to numerically calculate the Jacobian?
3
Mass Matrix in Lagrange equation
5
Computing the Jacobian Matrix -- chain rule?
0
How to get Max Torque on Robot arm 's Joints (RRR)
3
Using jacobian of arm robot to calculate transformation matrices?
0
Help to get robot jacobian from system of implicit equations
4
Struggling to understand Jacobian Inverse Kinematics
0
What is the most accurate method to calculate Torque of 5 DOF Robotic arm