How do quadcopters turn left and right?

In this picture, a sketch of a quadcopter is displayed with rotor's direction of motion. The magnitude of the rotational velocity is depicted by the thickness of the lines (thicker lines are higher velocity, thinner lines are lower velocity). 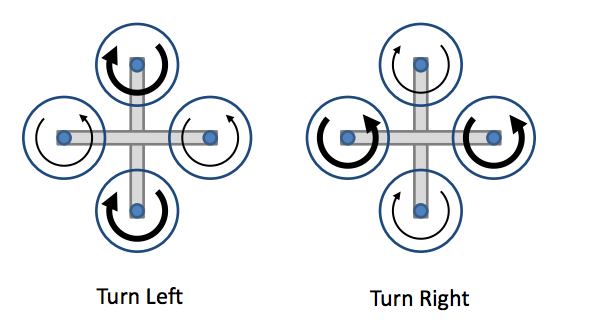 I'm told this is the correct way to produce turning motion, but my intuition (which is usually wrong) tells me that the two pictures should be reversed. My argument is as follows: For the picture on the left, the two rotors of higher velocity are spinning clockwise. If the motion of the rotors of greater velocity are clockwise, shouldn't the quadcopter also rotate clockwise? What am I missing here?

This is video is from an Edx course on Autonomous Quadcopters...It is 10 minutes and goes over the "Flying Principle" of quadrotors.

But basically what you are missing is the reactions. The famous Newtown's third law says (paraphrasing) "for every action there is an equal and opposite reaction". So by spinning the clockwise blades faster, a counter-clockwise reaction is what causes the quadcopter to rotate to the left, and vice versa. This is also why helicopters have a rear rotor, it counters the reaction torque of the main rotor.

There are actually two sources of yaw torque in a quadrotor and a multirotor in general.

The second is torque arising from the conservation of angular momentum when the rotor speeds are changed, similar to how a reaction wheel works (see the Cubli). This effect is present in a vacuum, so it does not rely on aerodynamic forces.

Not the answer you're looking for? Browse other questions tagged quadcopter dynamics or ask your own question.