How to find a solution for quadcopter PID control

I've built a quadcopter and a rig to safely test it on. I'm working on the PID for controlling the roll pitch and yaw. I understand how a PID works on a more simple plant like say a robot with wheels and I'm just really in the dark ( i believe ) with controlling and stabilizing a quad.

My question, how do I make these sensor readings effectively alter the motors' throttle?

Firstly, my approach is based on this model,

My IMU calculates the roll and pitch as a value between +-1.0 where being perfect balance will read as 0.0. Now a degree of +-1.0 means approximately 90 degrees from the original axis.
A normal input to the pitch to go forward would be something like 0.33, meaning tilt 30 degrees forward.

Now my motors take some value between 0 and 100. Originally I thought this would mean i would have to modify my motor values like so.

Finally, I'm taking those floating point numbers, from the IMU and computing them like with this method, which appears to be the normal way as far as I've found.

I don't know where to go from here? Also I have angular rate calculated from my IMU i just haven't encountered a solution that called for it.

EDIT. Below is a graph of roughly 300 readings (20ms apart) so roughly six seconds where i hold it in one hand and roll it roughly 45degrees right. with kp=1 ki=0 kd=0

The forces used to control the quad act around its center of mass, causing it to pitch, roll or yaw. Changes in the roll angle are induced by contrary variation of speeds in propellers A and C. Same effect with motors B and D can produce a change in the pitch angle and you will get lateral translation.

How do you feed your pid and what does steering.roll - gyro.roll is?

From the informations provided by your model description, I don't understand how your axis are oriented in space. Use the equations above if you are using the following reference system 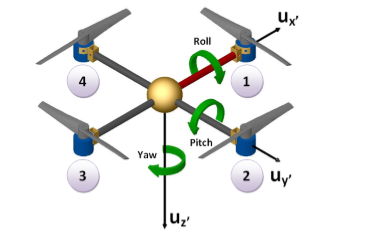 For more details about the pid action see this link, and this.