Find Centre Of Circle, when robot can "see" a partial arc

I originally asked this here but I am struggling to take the concepts, particularly "Circumcenter", discussed there and apply it in my context. So here it is in my context...

Therefore I know the height and the width of the square and therefore the width and height of the arc, I am sure there must be a way of approximating the circles centre?

What would be the quickest (not necessarily the most accurate) way of helping my robot find the centre.

In my head these are the steps of the problem:

Basically I feel I have some pieces of the puzzle but I am not sure how they fit together.

I am currently using python with OpenCV and you may have guessed, I am not great at understanding math unless its expressed in algebraic formula or code.

Here are some illustrive pictures to reference: 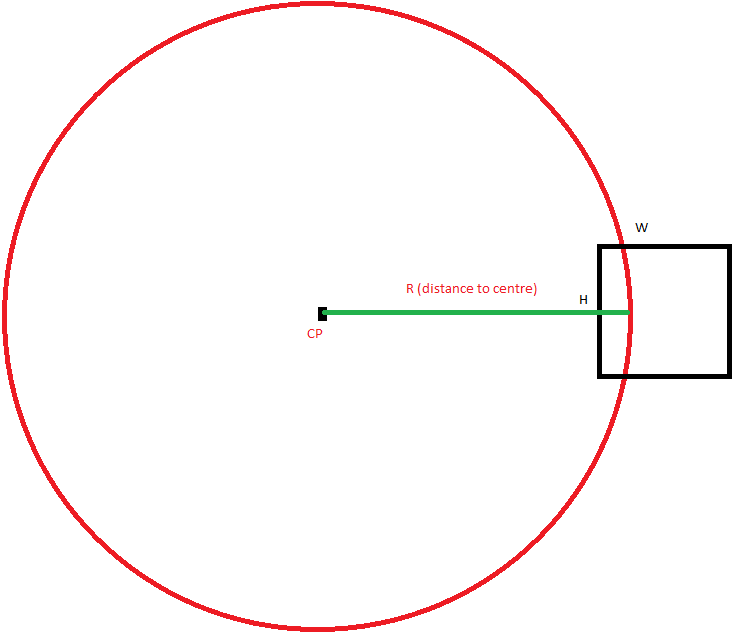 So let's begin with the math. This is high school material, so I go through it quickly.

The reason that this happens is quite trivial, but if you don't know it, just accept it at this point. 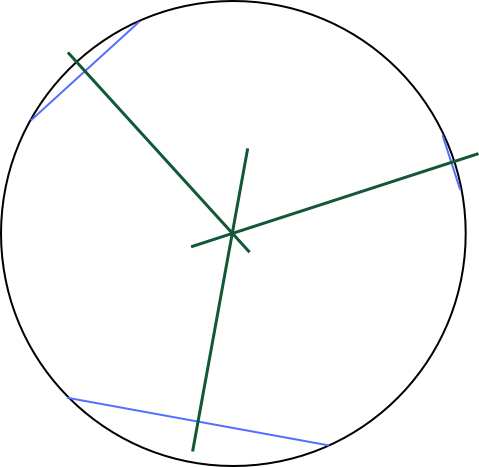 That said, the line segments don't need to be far apart for their line bisectors to collide at the center of the circle. They could cross each other or they could share a point as one of their ends. In short, any pair of lines are ok as long as they are not parallel. Sharing one end point and having the other end point different can ensure that this is the case.

To do the programming, first you need three points on the circle (arc).

These three points don't need to be spaced out evenly. The more points you have and the farther they are from each other can increase your precision. Let's stick to three points at the moment.

How can you find three points? That's quite simple. Run three horizontal lines through your image and record where you cross the arc. There would be at least three collisions, but there could also be more.

Now choose three as you like, preferably the two farthest points and one that is closest to the middle. Then find their bisectors and see where they collide. 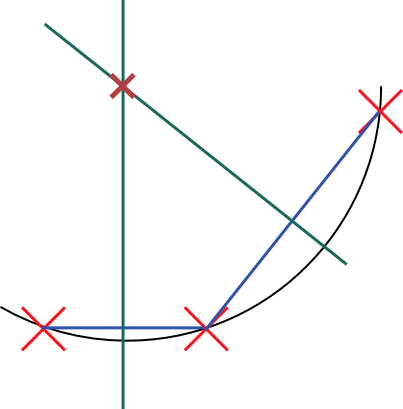 And that's it! You have your center.

As a bonus, if you find more points and have the time, you can increase your precision by calculating more candidate points for the center and simply average them. That would give you a smaller computation error. In the figure below, that would be the average of the points identified by the arrows: 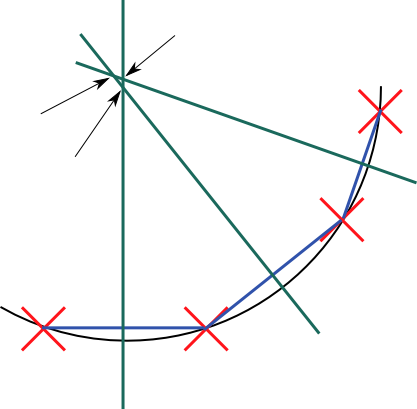 Note that these points should have theoretically coincided, but due to computational error are a bit offset.

I would recommend the following steps:

I believe this should not be computationally intensive. Haven't tried it though.

Not the answer you're looking for? Browse other questions tagged computer-vision navigation or ask your own question.

3
How can we solve the problem of robot size in sensor based motion planning?
1
Road Detection When the Robot is Off-Road
5
Can you find object distance using camera pose
2
Robotic Hand Grasp Planning - How do I find the initial contact point for each finger when grasping an object?
0
How can I calibrate 3 cameras without knowing global pose of the object & camera locations? How can I find the pose of each camera wrt the first one?