How does the "rated torque" for a gear relate to the maximum torque?

I have just sized the DC motors I want to use (corresponding to my robot and its intended applications - my figures include a 50% uncertainty factor to account for friction in reducers and other losses). Now I need to actually choose the exact motors I want to buy from the manufacturer (I am targeting maxon motors as I am not an expert and want no problem). I have a few down to earth questions about linking the mechanical needs to the electrical characteristics, among them:

Rated torque relates to the lifetime of the gear. You will need to read the manufacturer's guide in more detail to confirm for an individual model, but generally the rated torque refers to the output (not input) torque at which 10% of units tested are expected to fail after 1 billion continuous input cycles. The 1 billion input cycle limit in this case would be denoted by $L_{10}$ - referred to as the "L10 lifetime".

A more important torque spec might be the maximum repeated torque or maximum repeated peak torque. This usually (but not always) refers to the torque which results in a L10 lifetime of 100 million input cycles (i.e. a factor of 10 less than that of the rated torque).

Also important is the momentary peak torque. This is an "abnormal" torque that occurs that one might expect due to a collision of a robot arm or some other unusual event. The L10 for momentary peak torque is another order of magnitude lower - e.g. 10 million input cycles in this case.

Harmonic Drive Systems has the clearest explanation of what these torque specs mean and how they relate, in my opinion. See graphs below (from here) as they relate to a harmonic drive. 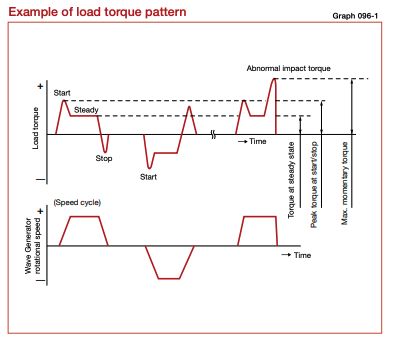 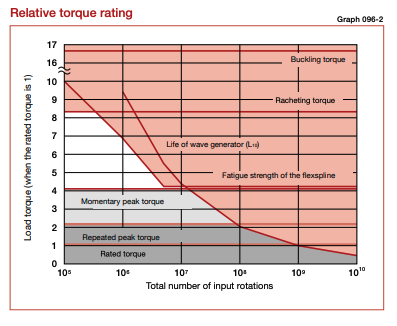 One interesting aspect of this is the torque vs. L10 lifetime curve. You will notice from the graph that the the lifetime decreases by a factor of 10 for every doubling of torque. In the linear domain this implies that the gear fatigue lifetime is roughly proportional to the cube of the torque. This is an interesting empirical relationship, touched on in more detail here.

7
Do servo motor specifications take into account the gear ratio inside?
2
Is the nominal voltage of a motor the voltage to apply to the motor?
3
Choosing DC motor: max needed torque vs nominal torque
3
Stated power for a motor does not equal nominal voltage x current?
2
Selecting a gear reduction: torque vs speed
1
Determining rated speed (RPM) required for a DC gearmotor
0
DC geared motors or leadscrew and motor for joints
1
Industry robot maximum torque
1
What is the difference between the holding torque and stall torque of a motor?