what are the differences , specially when adding an encoder to the dc motor you can have the position and it will be similar to Servo Motor ?

Let's try and clear things up a little bit...

These can be found in radio controlled cars and airplanes to e.g. turn the wheel or actuate various controls in the airplane. They are pretty cheap brushed DC motors, with gears and some sort of crude feedback mechanism. They typically convert an input voltage into a position within a given range.

Brushed motors rely on "brushes" for commutation to drive current through the rotating motor coils. In a brushless motor in contrast the coils are fixed and potentially some sort of feedback mechanism is used to control the current through those coils to rotate the motor. Brushless motors can also be run open loop (e.g. stepper motors). The DC is a bit of a misnomer as the motors themselves run on AC.

These would be typically found in applications such as industrial robots or CNC machines. They come in a very wide range of sizes and power. They are a combination of a BLDC motor with a rotary encoder, a hall effect sensor or both. They are meant to be used with a closed-loop controller. Pretty much any type of motor can be used in a closed loop servo but since those are more commonly used in that sort of application the term "servo motor" stuck. 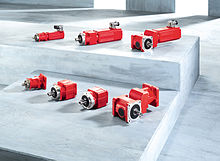 For driving a robot wheel you could consider:

It really depends on the economic details of the project you are working on. If it's a one time project with limited budget I would say a DC brush motor with or without position feedback would do the job. Sure you will need a controller. If you aim to get a consistently high mechanical work output, precision positioning, and compact size you might draw your attention to servo motors. Some of them already come with a gear and a controller integrated. If you still feel embarassed about making the right choice, you could find some hints in here.What you need to know about robot servos before purchase

Not the answer you're looking for? Browse other questions tagged motor brushless-motor servomotor or ask your own question.