Controlling a system with PID that resists backdrive

I'm controlling the angular position of a pendulum using a DC motor with a worm gearbox. Mechanically, worm gears are impossible to backdrive.

Using a PID controller on a pendulum system with a regular DC motor (no worm gear), the integrator would help the motor find the appropriate constant power setting to overcome gravity so the pendulum can hold any arbitrary position. With the worm gear, however, there is no need to apply constant power to the motor once the desired position is achieved. Power to the motor can be cut off and the worm gear will resist gravity's force to backdrive the pendulum to the lowest gravity potential.

The only solution I can come up with is to test for a special condition in the PID algorithm that checks if the position has been reached AND the angular speed is small, then instantaneously reset the integrator to zero. Is there a better way to handle the integrator in a system that resists backdrive?

When I originally worded my question, I was mostly just interested in the academic approach of backdrive resistance in a PID loop. But it'll help if I explain the actual mechanism I'm building. The device is a robotic arm that rotates on a car window motor. It will also occasionally pick up and drop small weights at the end of the arm. Manufacturing variability in motors and the difference in drive torque when picking up the small weights led to me consider a PID loop.

This is a picture of my own PID-like regulator of the form:

The big difference from regular PID regulators is in the way of using the accumulator for both I and D - which is a bit similar to that leaking integrator mentioned by ryan0270 (I was experimenting with similar thing as well). The derivator will decrease the accumulator (which can be limited as well to prevent windup and big value when set-point is greatly changed). 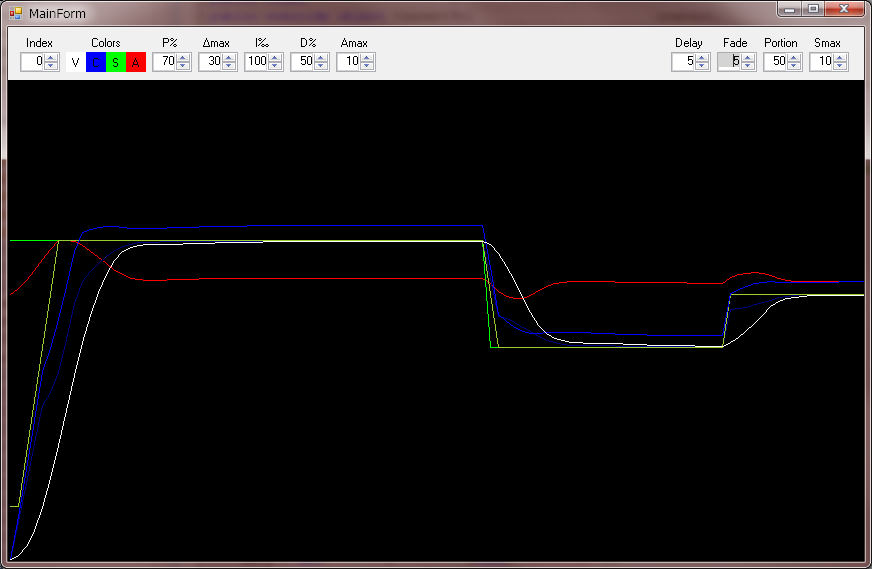 I have designed it for temperature regulation, but it seems to be equally good for your problem. My fade factor of the system is simulating the temperature dissipation / error of equitherm regulator. Your gravity and variable small weights seems similar to me. The integrator can compensate for this, but would normally overshoot and cause oscillation. Derivator applied on the shared accumulator prevents that - it reduces the accumulated error by the change made.

Proportional is strongest at the beginning (startup acceleration), Integrator comes next (error-correcting acceleration) and Derivator will slow it last (like a brake - preventing the overshoot by reducing the accumulator).

You can tune it a bit and use the error, accumulator and feedback-change to detect the steady state to power it off.

I have been experimenting with it a bit more - used the regulator with erroneous non-linear 7bit DAC (custom-made of few resistors and opto-transistors) with erroneous main regulation (basic conversion peformed very bad in high values) and observed the behaviour (good ADC was used as feedback). The regulator performed really well and quickly ended with 1-bit oscillation (which is inevitable). I have further enhanced my simulation with this gained knowledge and here is the picture: 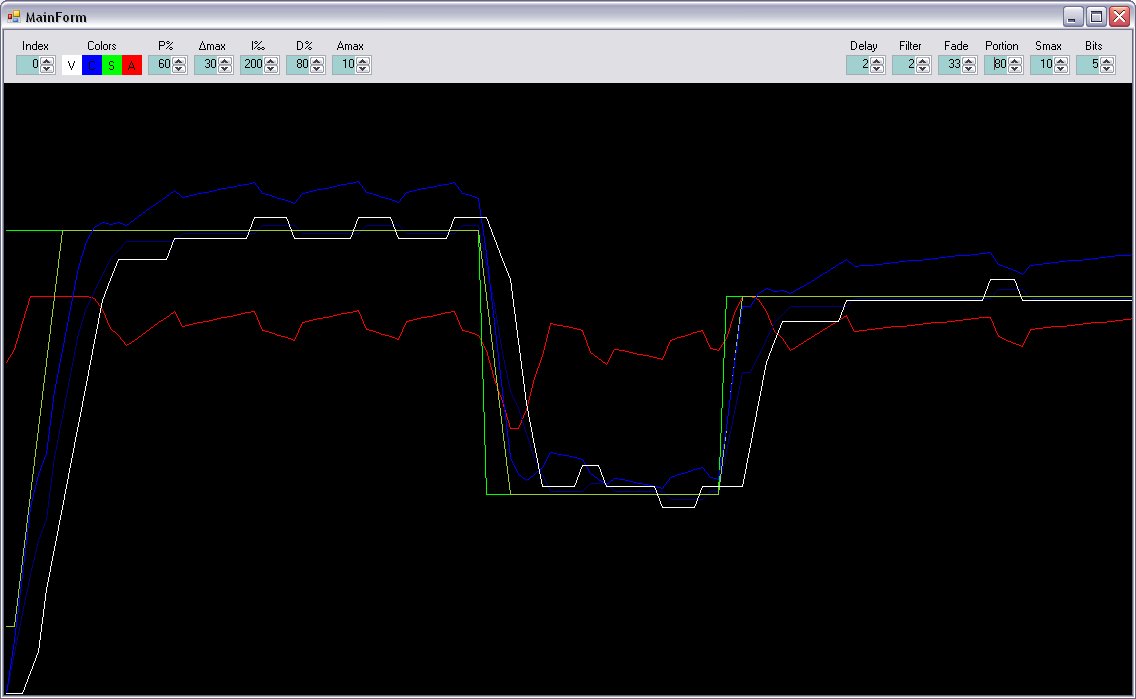 I would find something like a leaking integrator. The primary component will integrate error but there is also another component that will always slowly decay the integral value over time.

It sounds like you don't need a PID controller at all. You're trying to move a worm gear until it reaches a given set point, then turn it off -- proportional control sounds like all you'd need.

Why not just have a deadband region? (when position is close enough to target, stop controlling the motor).

Not the answer you're looking for? Browse other questions tagged pid or ask your own question.

9
What is the actual physical actuated quantity when controlling the position of a servo?
7
Cascading PID DC Motor Position & Velocity Controllers
1
Converting a linear acceleration command into a DC motor command?
0
Estimating angular speed from position for control purpose
10
Control both Velocity and Position (Linear actuator)
6
Quadcopter PID Control: Is it possible to stabilize a quadcopter considering only angle measurements?
2
Quadcopter PID: Controller is Saturating
9
How can we use the accelerometer for altitude estimation?
4
Quadcopter refuses to fly when the Yaw PID component is added
2
Can I measure torque from this motor by only measuring the current?