I have a system in which I have two separate subsystems for estimating robot positions. First subsystem is composed of 3 cameras which are used for detecting markers the robot is carrying and which outputs 3 estimates of the robot's position and orientation. The second subsystem is a system which is located on the robot and is measuring speed on the two points of the robot. By numerically integrating those two I can get an estimate on the robot's position and orientation (because I am tracking two points at once).

I assume there must be a better approach than to just reset the position with the first system's estimate (as it is not 100% accurate), but to also use the accumulated position from the second sensor system and fuse that with the new data from the first system. Also, there is a question how to fuse 3 estimates of the first system? There must be a better way than pure average as it might happen that the two estimates are exactly the same and the third one is completely different (meaning that it is probably more wrong)?

Do you have any fusion algorithms to recommend to use in such a system? I know about Kalman filter, but I am having trouble figuring out how to use it as the two systems output data at different frequencies.

I hope the question is clear enough, what is the best approach to fuse the estimates into a more correct and accurate estimate?

What you are describing is essentially a textbook case for using a Kalman filter. First you need a prediction step. Let's assume you are predicting the pose of the robot $(x,y,\theta)$, given the previous pose estimate and your high-frequency velocity measurements $(v,\omega)$, where $v$ is the linear velocity and $\omega$ is the angular velocity.

Now you have your less frequent correction updates, which actually measure the full state, making this quite simple, i.e., 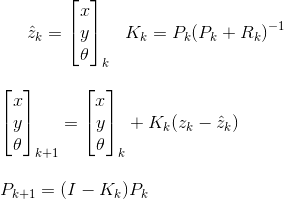 To answer your question about the different rates, you can just run your motion update repeatedly until your prediction update arrives. For example, it might happen that the motion update occurs 100 times before your perform a correction.

You also asked about how to handle three cameras. The easiest way is to just process them sequentially; just apply three corrections in a row. Another way is to stack them and perform a single update. You would need to adjust the correction update step to do it this way.

Not the answer you're looking for? Browse other questions tagged sensors localization kalman-filter sensor-fusion or ask your own question.

29
How to fuse linear and angular data from sensors?
3
How to perform this reference system transformation?
7
object level sensor fusion for multiobject tracking
1
Position Estimates from sensor fusion
1
Fusing absolute robot localization from markers
2
How to synchronise data for fusion in Kalman from multiple sensors with different timestamp information?
1
Sensor fusion of GNSS and IMU using UKF
2
What's the correct approach to merging of localization and odometry data?