Denavit–Hartenberg parameters of a robot with spherical wrist

What are valid values for the Denavit-Hartenberg parameters $d$ and $a$ (sometimes called $r$) of the last 3 links of a robot with spherical wrist?

From this reference, "A spherical joint can be represented by three consecutive rotary joints with intersecting rotation axes."

So the retrictions should be:

But in this exam I have found on the internet, It says that the KUKA robot has spherical wrist, and $d$ of the last joint is different to $0$. Would $d\neq0$ in the last link still yield a spherical wrist?

A spherical joint can be represented by three consecutive rotary joints with intersecting rotation axes.

This statement is true, your restrictions, I'm afraid are not. The position of spherical wrist can be determined based on what you said, but don't forget that there is another transformation from spherical wrist to the end-effector of the robot and that is the point with the last $d_i$. For example consider figure 4.2.A from the link you provided: 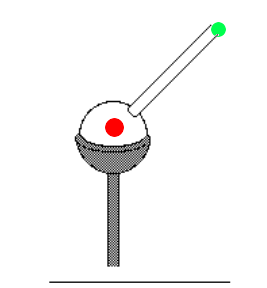 If you wanted to end kinematic chain at the red point, you could go with $d=0$, but to calculate the position of green point, how would you continue?

In this set of slides there some example DH for spherical joints. Furthermore, you can have a look at the slides of the same professor whom you have mentioned his exam (it can give you an idea of why he has answered the question that way).

Finally, you should remember that there are the following ambiguities in Denavit-Hartenberg convention i.e. two DH representation of the same robot, can be different, yet will result in the same forward kinematics. DH ambiguities: