I'm trying to create a high-level API for controlling a drone, where I tell it how far I want it to go (eg. moveForward(10)). The SDK allows me to give the drone an instantaneous velocity at 10 Hz (every 100ms) to control it. Currently, I have a naive solution of fixing a velocity (say $v = 1 ms^{-1}$) and then computing time as $t=\text{distance}/\text{velocity}$, then sending it the command of v velocity for t seconds every 100ms and after t seconds, I send it a command of 0 velocity. As expected, this causes a highly jerky motion, since the drone accelerates to the given speed instantly and then decelerates immediately to 0 at the end of t seconds.

I want to create a more smooth motion, with a lesser jerk. Reading around, I found out about S-curve profiles. I have gone through some math, and currently have the following equations to build an S-curve profile:

One of the curves generated this way is for example: 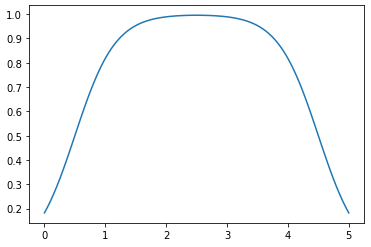 I can also get the position curve verses time using scipy's numeric integration on the array of velocities: 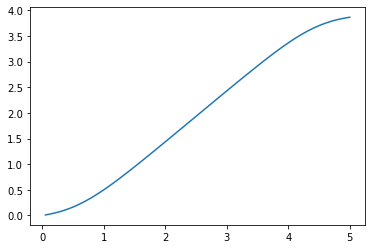 Here C would be the integration constant, which I think is -P(0), since I want to consider the initial position to be $0$.

Even after all of this, the problem is not addressed, since I actually need to find t for which the final position is equal to the distance I tell the drone to travel. I thought of taking an inverse of $P(t) = k$ as $t = P^{-1}(k)$, but this approach comes with its own problems:

While this is my current approach to solving the problem, I am not too happy with it. Is there another, simpler way to get the s-curve velocity profile for a given distance, where the time taken to complete the trajectory is flexible, or is there a way to simplify my current approach?

You were probably trying to avoid this and generate some kind of closed form solution, but as you show this is really burdensome.

They way I would solve this (which might not be the best way) would be to work in the discrete time domain:

where $T$ is the discrete time (e.g. sampling) interval.

So just do an exhaustive search for the $N$ that yields $x[N]$ closest to some desired $x_{final}$.

Sorry in advance if I am missing something.

I was able to derive a piecewise continuous velocity function that satisfied my needs, by going back to the basics (Newton's equations of motion). First, we need to analyse the curve that needs to be designed. The S-curve velocity can be broken down into 7 phases (and the corresponding accelerations in those phases): 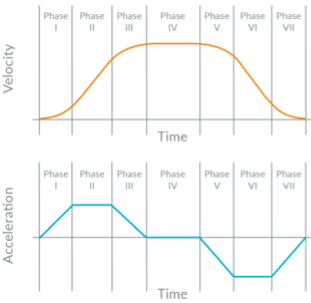 As mentioned, we use Newton's equations of motion, but with the third derivative of displacement (constant jerk $j$):

If interested, you can find the full derivation here.

Basically, the idea is to compute the time taken and distance covered in each phase. Phases 1, 3, 5 and 7 are constrained by the value of jerk and the maximum acceleration. Phases 2 and 6 are constrained by the value of acceleration, and Phase 4 has no constraints. As such, we can say whatever distance is not covered in phases 1,2,3,5,6 and 7, must be covered with constant velocity $v_{max}$ in phase 4. Using this approach, we can ensure the total distance covered is the same as the desired distance. Further, computing the time for each phase allows us to add up the times for all the phases and get the total time of flight. A detailed derivation can be found in the link above.

Skipping the derivation here, the final velocity curve obtained is a piecewise function depending on which time phase we are currently in:

How these values came to be can be found in the derivation.

Finally, based on the constraints of maximum velocity, acceleration and constant jerk, the created piecewise curve has a definite integral from $0$ to $T$ equal to the desired distance to cover $D$, where $T$ is the total time of flight, computed as $T = \sum_{i=1}^7 t_i$.

The idea for this approach came from this article.

dkapur17dkapur17
10144 bronze badges
New contributor
dkapur17 is a new contributor to this site. Take care in asking for clarification, commenting, and answering. Check out our Code of Conduct.
$\endgroup$
Add a comment  |

Not the answer you're looking for? Browse other questions tagged quadcopter motion-planning trajectory drone or ask your own question.