How to use a PID controller for different kinematics robots

pid odometry
Share
Improve this question
edited May 15 at 13:58

The kinematics - odometry part seems okay. I think your general configuration for the controller is incorrect.

You have already calculated dS. You feed this dS to a controller (a sole P Controller may work just OK, you may not need the other terms). The output of the controller is going to be the desired speed - V_des. You also have already calculated angle "u", which is the relative angle of the vehicle to the goal point. You subtract the vehicle "theta" from this angle "u" to have the orientation error. Then, you can feed this error to a separate controller - a sole P controller may be enough for this too. The output of this controller is going to be the desired rate of orientation - Theta_dot_desired.

From your odometry function, we already know that the Theta_dot is equal to the speed difference between the right and left wheel, divided by the wheel base. It is not written in your odometry code directly, but I believe that the robotV variable must be equal to the sum of the wheel speeds, divided by two. From these two equations, you can solve for the wheel speeds, given the desired robotV and Theta_dot.

You can use the following equations I have written as a reference:

General Kinematics, given the Wheel Speeds: 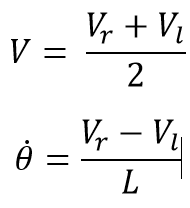 Substituting the Controller Outputs to the Kinematic Equations, in order to calculate the Inverse Kinematics: 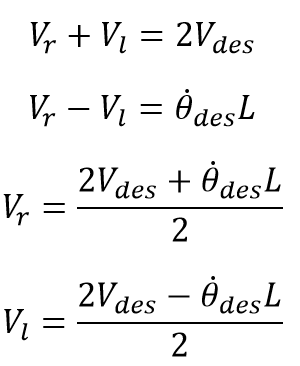 I am not very sure about how to use your library, but I believe that you can work it out if you understand the controller structure.

Not the answer you're looking for? Browse other questions tagged pid odometry or ask your own question.