So here is the context:

I am working on a motorcycle simulator. It consists of a motorcycle frame mounted on different actuators (see picture on the left). 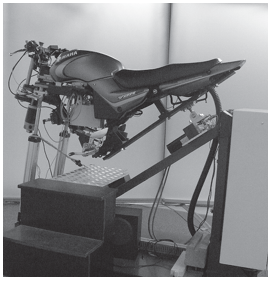 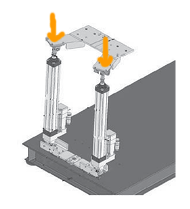 In particular, the two actuators at the front serve the purpose of rendering the motorcycle roll angle. There is a force sensor on both sides between the motorcycle frame and the actuator (see picture on the right). The force sensors are tensile/compressive force transducers. These are are 1-axis only force sensors.

Imagine a rider on the simulator.

So here is the behavior that I observe in terms of sensor output :

I would like to model the expected output of both of the sensors as a function of the roll angle. However, I have thus far been unsuccessful.

My hypothesis is that at rest the sensors both measure half of the weight of the frame + the rider and when inclined they measure some kind of function of this weight and of the roll angle. But when I draw the free body diagram I always find an equal force applied on both sides, which is not coherent with the actual results.

Edit: This is not a homework question, but let me show my work anyway.

At rest, the forces involved are:

So the equilibrium equations are:

Because the sensors are only sensible to traction/compression along their y-axis, I am not interested in equation (1). Equations (2) and (3) result in $R_{r_y} = W/2$ and $R_{l_y} = R_{r_y} = W/2$. According to this, it makes sense that at rest the sensors output the same voltage $V_0$ (which corresponds to them being subjected to a compressive force of magnitude $W/2$).

What I am having trouble doing is using the same logic in the inclined case.

Could somebody please help me figure this out?

sensors dynamics torque force force-sensor
Share
Improve this question
edited May 11 at 8:07
Pauline
asked May 10 at 9:33

This is me trying again with the help of @Chuck's answer.

Let's write the Cartesian components of each of these vectors:

The thing you're missing from your equations of motions are the torques. Typically in these kinds of problems we assume the actuator ends are "pinned" connections so you can't transmit a torque through that mounting point. This lets you assume that the actuator force must cancel out any moments generated in your system. 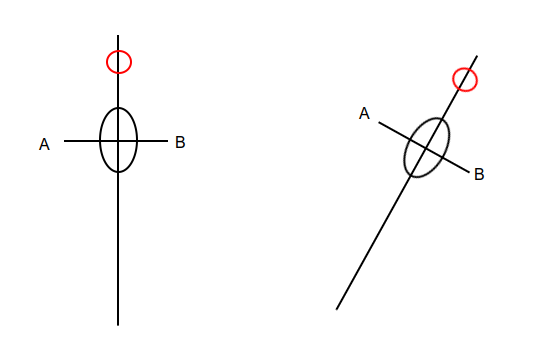 The center of mass is the red circle. The left case has the equal torques about A and B. Remember that the equation for torque is $r \times F$. The vector $r$ is the vector from the pivot to the center of mass, and $F$ is the force vector, which is $mg$ and points down.

Then you have to consider the torque about B and do it all over again. In the left scenario you wind up with the same counter torques and you get the load sharing - each actuator supports half the weight.

If you were to extend this more, if the center of mass is directly over B then there is NO torque about B and A doesn't support any weight at all. If you had the following scenario: 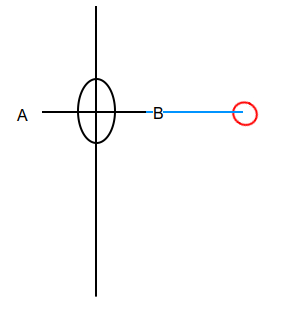 Not the answer you're looking for? Browse other questions tagged sensors dynamics torque force force-sensor or ask your own question.

16
How does a six-axis force/torque sensor work?
30
How to fuse linear and angular data from sensors?
5
Wind force impact on torque mechanical arm
3
What approaches should I consider to create rotating a turret
3
From a linear force actuator that spans multiple links and joints to the equivalent motor torque
0
When not to use pseudoinverse?
1
Force-torque sensor reading when a robot is stationary
0
Do hobby servos respond to step inputs with a step in torque?