I'm trying to get an extended Kalman Filter to work. My System Model is:

where lat and long are latitude and longitude (in degree) and $\theta$ is the current orientation of my vehicle (also in degree). In my Prediction Step I get a reading for current speed v, yaw rate $\omega$ and inclination angle $\alpha$:

I use the standard prediction for the EKF with $f()$ being:

As I have a far higher frequency on my sensors for the prediction step, I have about 10 predictions followed by one update.

Trying my implementation with testdata where the GPS Track is in constant northern direction and the yaw rate constantly turns west, I expect the filter to correct my position close to the track and the orientation to 355 degrees or so. What actually happens can be seen in the image attached (Red: GPS Position Measurements, Green/blue: predicted positions):

I have no Idea what to do about this. I'm not very experienced with the Kalman filter, so it might just be me misunderstanding something, but nothing I tried seemed to workâ€¦

I poked around a bit: If I set the Jacobian Matrix in the prediction to be the identity, it works really good. The Problem seems to be that $P$ (the covariance Matrix of the system model) is not zero in $P(3,1)$ and $P(3,2)$. My interpretation would be that in the prediction step the Orientation depends on the Position, which does not seem to make sense. This is due to $F_J(2,1)$ not being zero, which in turn makes sense.

Can anyone give me a hint where the overcorrection may come from, or what I should look at / google for?

There is an error in your posted equation for the Jacobian $F_J$, so that could be the source of the problem. It should look like this:

With that new Jacobian I get results that look like: 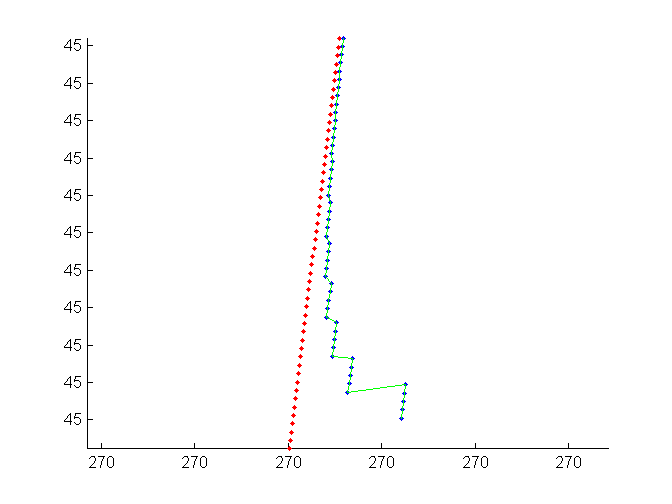 Not the answer you're looking for? Browse other questions tagged kalman-filter gps sensor-fusion or ask your own question.