Perhaps a bit of a simple question, but since I don't have a background in robotics/engineering, then I imagine this would be the perfect place to ask such a question.

I am buying a 6-DOF Stewart platform to perform an experiment. In this experiment, I will impose to the device (a small ship) that is attached to the platform (it will be something similar to the one on the picture attached) a harmonic motion over two degrees of freedom, in my case, it will be along the x-axis (surge) and along the y rotating axis (pitch). So that is, I want my device to go back and forth in a given frequency for a defined amplitude.

My question is: Given that I know the FREQUENCIES and the AMPLITUDES that I want to perform on my experiment as well as the WEIGHT of my ship. Then, how could I calculate the specifications needed to specify what would be required by the platform (in terms of forces and motion)? 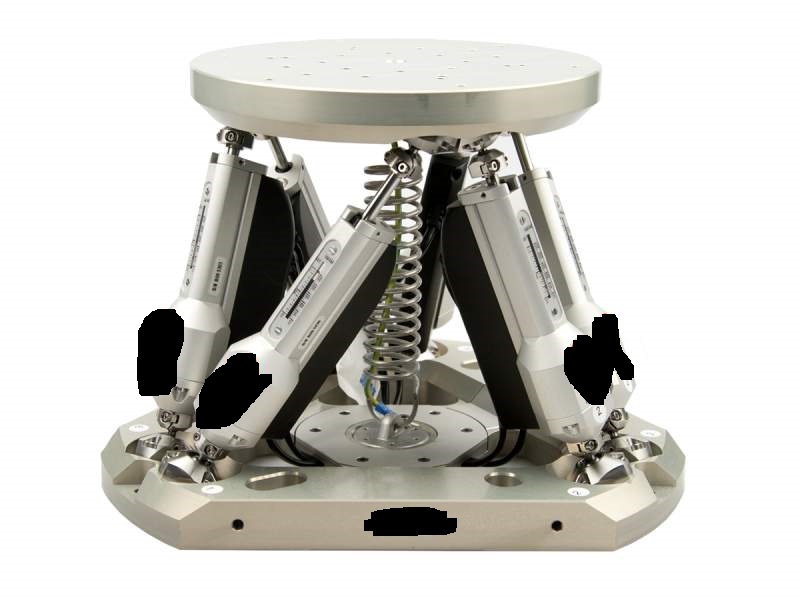 The mass of your ship is its weight divided by $G$, measured in kg. Newton tells us that the force $F$ necessary to accelerate the mass is $F=ma$. That gives the instantaneous force that your device exerts on your ship.

To determine motor ratings, you would augment that with the additional forces to accelerate the setup itself, friction, mechanical (dis)advantage due to gearing or leverage, motor efficiency, thermal derating, and so on. Operating in two dimensions, they will interact because, for instance, pushing sideways on a bearing will increase the friction for the other dimension. All in all, that's why the question is open-ended.

Not the answer you're looking for? Browse other questions tagged kinematics inverse-kinematics motion-planning dynamics forward-kinematics or ask your own question.

6
restricting range of motion with complex constraints
5
Obstacle Avoidance while Navigating
2
Linear State Space of a 6DOF robot
0
6DOF serial robot (PUMA robot) dynamic model equations
0
What is my last rotation matrix for the last three angles when i have found the first three when doing inverse kinematics to a 6dof robot?
0
Sinusoidal trajectory of each cartesian coordinate for the end effector