In continuation of the question I asked here: Quadcopter instability with simple takeoff in autonomous mode ...I'd like to ask a few questions about implementing a basic PID for a quadrotor controlled by an APM 2.6 module. (I'm using a frame from 3DRobotics)

I've stripped down the entire control system to just two PID blocks, one for controlling roll and another for controlling pitch (yaw and everything else... I'd think about them later).

I'm testing this setup on a rig which consists of a freely rotating beam, wherein I've tied down two of the arms of the quadrotor. The other two are free to move. So, I'm actually testing one degree of freedom (roll or pitch) at a time.

Check the image below: here A, B marks the freely rotating beam on which the setup is mounted. 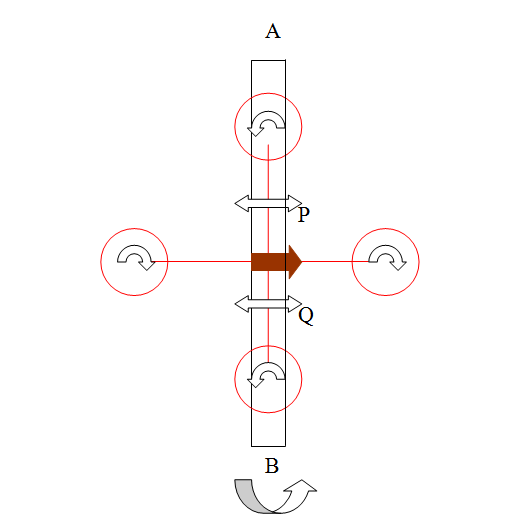 With careful tuning of P and D parameters, I've managed to attain a sustained flight of about 30 seconds.

But by 'sustained', I simple mean a test where the drone ain't toppling over to one side. Rock steady flight is still no where in sight, and more than 30 secs of flight also looks quite difficult. It wobbles from the beginning. By the time it reaches 20 - 25 seconds, it starts tilting to one side. Within 30 secs, it has tilted to one side by an unacceptable margin. Soon enough, I find it resting upside down

As for the PID code itself, I'm calculating the proportional error from a 'complimentary filter' of gyro + accelerometer data. The integral term is set to zero. The P term comes to about 0.39 and the D term is at 0.0012. (I'm not using the Arduino PID library on purpose, just want to get one of my own PIDs implemented here.)

Check this video, if you want to see how it works.

http://www.youtube.com/watch?v=LpsNBL8ydBA&feature=youtu.be [Yeh, the setup is pretty ancient! I agree. :)]

Please let me know what could I possibly do to improve stability at this stage.

@Ian: Of the many tests I did with my setup, I did plot graphs for some of the tests using the reading from the serial monitor. Here is a sample reading of Roll vs 'Motor1 & Motor2 - PWM input' (the two motors controlling the roll):

As for the input/output:

Input: Roll and pitch values (in degrees), as obtained by a combination of accelerometer + gyro

I resolved the problem. Here's how:

Thanks for all the support.

If you're interested, here's the source code of my bare-bones PID implementation: PID Source Code

Please feel free to test it in your hardware. Any contributions to the project would be welcome.

I'd start by reading over this question: What are good strategies for tuning PID loops?

If I had to guess, I'd say you have a problem in the way your complimentary filter is constructed. With the quadcopter motors off, you should tilt the frame back and forth and see if the roll / pitch values that are reported are actually accurate.

To me, it looks like there is a delay between the input from the accelerometer and the output of your filter -- the oscillation could be explained by late reactions to the input data. The eventual turning over looks like a possible integration error that accumulates over time -- in other words, while your quadcopter is on its side it actually thinks it's hovering levelly.

(Update) Regarding your graph, the fact that your motor speeds continue to increase (instead of staying balanced) means you have an error somewhere. Perhaps your Integral term is growing unbounded, and you should specify a reasonable maximum for it.

Well there could be a number of things going on here...

1) Are your reported angles correct? noisy? You can easily check that by manually tilting your quad and monitoring the values coming out.

Not the answer you're looking for? Browse other questions tagged arduino pid quadcopter stability or ask your own question.

74
What are good strategies for tuning PID loops?
4
Quadcopter instability with simple takeoff in autonomous mode
4
Quadcopter PID output
4
Grasshopper effect on a quadcopter with kk2.1.5