In my project, a robotic arm with an end effector of radius R needs to cover a 2D area in an optimal route (least time, smooth path). I am trying to achieve that by generating spiral covering routes.

I am currently a bit lost. I have a 2D area shaped arbitrarily. How can I implement the route generation algorithm to traverse it spirally (see photo)? I am kinda starting this project and I need a robotic arm to traverse this area spirally. Any suggestions would be helpful.

The spacing of the spiral turns has to be uniform and adjustable.

The generated path would be similar to that generated in CNC routing software. (Figure 2) 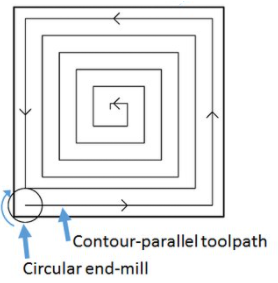 I tried implementing a very basic Matlab implementation but the result is coarse (See Figure 3). 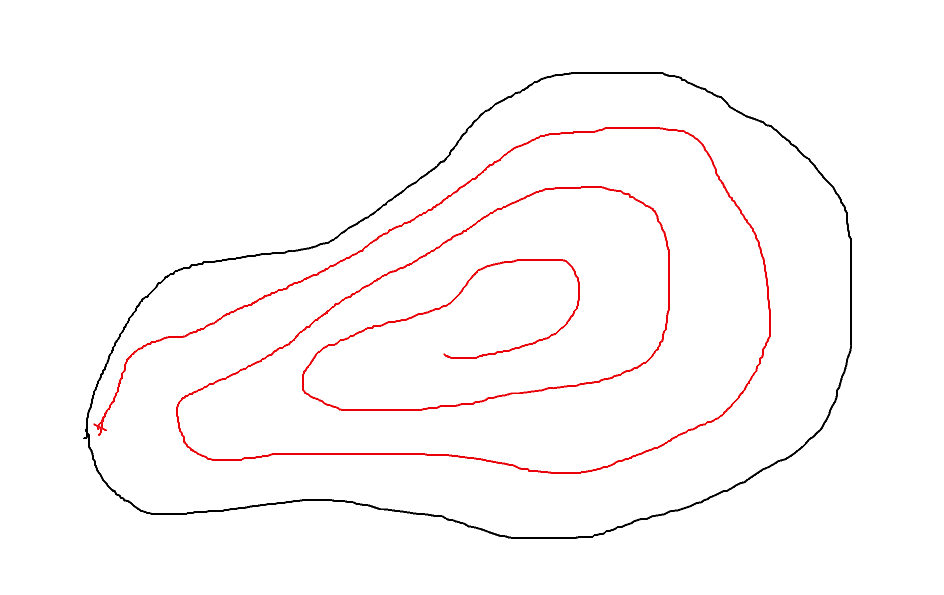 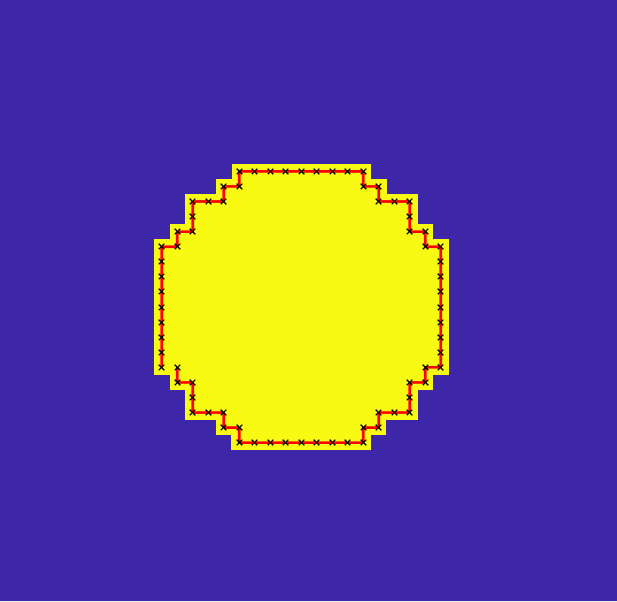 Here's the approach I would take. Let's start with the skeleton, then add the meat and the hair.

Suppose the outer contour has an identifiable tangent everywhere. Suppose the robot arm will travel generally clockwise, as in your sketch with the red path. It will keep its "left hand" on the border. That means that the circle center always lies on a normal to the tangent, R away from the intersection of the tangent and the normal (i.e., from the border).

The arm (that is, the center of the end effector) will travel in a path approximately parallel to the tangent, incrementally adjusting its course left or right according to how the tangent changes direction. As the center traces out its path, the "right hand" traces out a path, too. The "right hand" is diametrically opposite to the "left hand", 2R from the border. Everything between the "left hand" and the "right hand" will have been covered, or milled, or routed, or whatever.

When the arm gets back to where it started, that's one circuit, or layer. The path traversed by the "right hand" becomes the new border, and the whole thing iterates once more. It terminates when the circle is trapped, such that it would intersect the border no matter what direction it moves.

What about corners, where the tangent is undefined? I hope the border is at least piecewise continuous. If the corner is not pathological, the arm's path for one piece will intersect with the path for the next piece, so the arm just starts following the second path where the paths intersect. If it's too pathological for that work, I'll wave my hands about differential geometry or Lebesgue measure or something, and send you off to math.stackexchange.com :-)

How does it represent the "right hand" path during traversal? If you have some analytic representation for the border, like Bezier splines or something, there might be an analytic transformation or something. It would be simpler and more general, though, (but probably use more memory) to "draw" into a big bitmap, the way a paint program's brush would. I hope someone has found a better way.

How does it identify a tangent in a bitmap? It will sample a neighborhood of pixels, and locally fit a line or some other, more general curve. Even the best fit will only be an approximation, but then the bitmap itself is an approximation. The size of the neighborhood and the acceptable degree of approximation will serve to smooth the computed motion. Those smoothing parameters also give the flexibility to fix the coarse zig-zaggy right-angle "problem".

How does it get from one layer to the next? Probably the same way it got to the starting point, whatever that was.

One loop inside another is not a continuous spiral path. That's true. In fact, forbidding overlap, it probably won't even be able to finish the center. The problem statement has to relax one or more of the constraints of

To make a single spiral path, we could do a gradual linear interpolation from one path to the next, with pathlength/circumference or something as the parameter—like the "grooves" on a phonograph record. There are details for how to get it started and ended, but then record players actually work.

Not the answer you're looking for? Browse other questions tagged path-planning routing or ask your own question.

4
Path Planning code
0
Path planning or 2D Mapping
2
In path planning, what kind of path is feasible for a nonholonomic robot?
0
Computing attractive and repulsive forces from gradient of Artificial Potential Functions for path-planning
0
Path planning using nodes
0
After planning a path, how do I ensure the robot is following the planned path?