I ask the robotics specialists for help as I am a little confused.

I have two subsystems which are shown in the picture below: 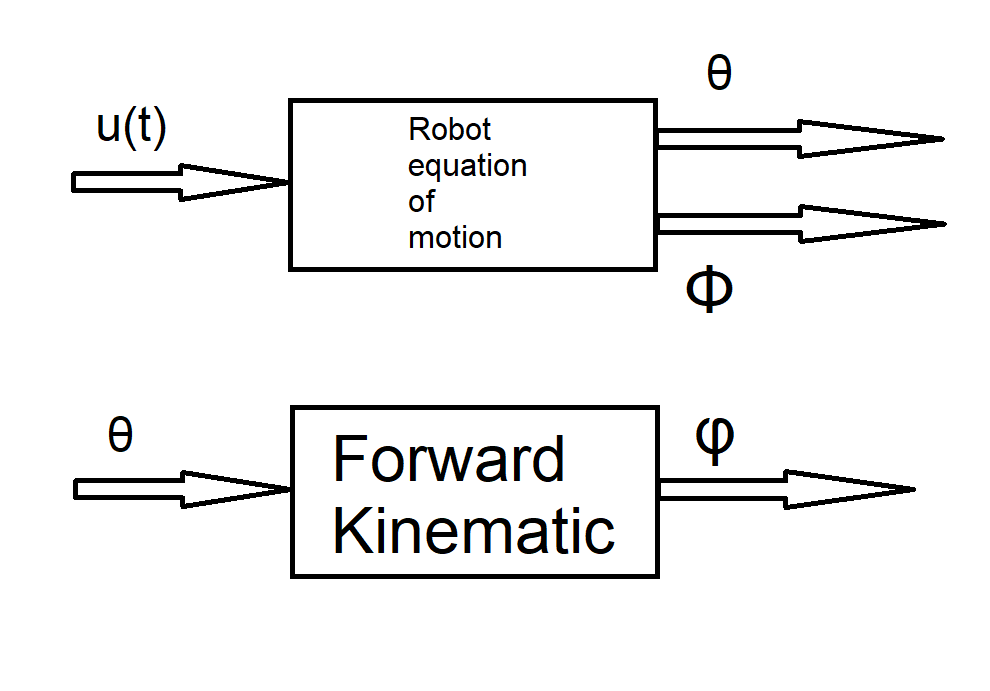 One of them is a system of stable and controlled differential equations of motion for robot.

Second is a block that implements a Forward Kinematic $f(\theta)$ from a signal entering its input.

I came across this article and a diagram from it.

Task: choose the structure of the mathematical model in such a way that $\phi=\Phi$. In the above diagram, I am confused by the fact that a block of direct kinematics is used to estimate the angular position of the robot, and, generally speaking, this mechanical coordinate should be available through the equations of motion.

The system in the paper is supposed to control an exoskeleton which will mimic the motions of the person inside, except bearing the weight of the backpack (and some of the person's weight, too). There is no traditional control input for servoing. Instead, to detect the person's intent, it seems to rely on how the person inside incrementally perturbs the posture.

The forward-kinematics part of the system computes what it thinks the system posture should be, given what it knows of the control inputs to the motors. If the measured posture differs from that reference posture, that must be because the person is trying to move, so the overall control should accommodate.

The paper's innovation seems to be to distinguish (a) person-caused perturbations from (b) the errors that servo controls typically try to eliminate. That sounds sort of magical, and the paper itself is not a model of transparent communication. I hope my interpretation here adds clarity, not confusion, but sifting through the details of the math is your avocation, not mine!

Not the answer you're looking for? Browse other questions tagged mobile-robot control motion-planning mechanism robot-model or ask your own question.

1
stepper or servo torque in one direction only

10
Extended Kalman Filter with Laser Scan + Known Map
6
Motion Model for Holonomic Robot
4
What is the bicycle model for a dynamic robot?
0
Can I model a 1D segway as a cart-pole system?
2
Dynamic model using identification for control
4
Understanding Impedance Control
2
motion model for forward movement
2
Is it better to use Jacobians to compute IK when a closed form for IK is available?