How to calculate holding and operating torque at the base?

Could anyone please help me with the formula to calculate the operating torque and holding torque at the base to rotate the structure on top of it as shown in image with white arrows? 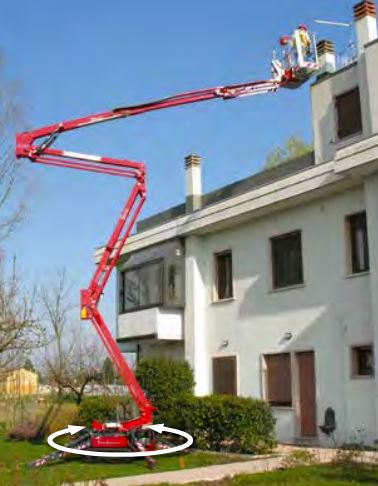 Thank you in advance for your help. Have a nice weekend.

Without measuring friction coefficients and weights and such, there is no way to compute a number. But you asked instead about a formula.

The operating torque will be the sum of

For holding torque (no motion) we see no rolling friction and no inertia. Furthermore, the static friction helps it stay in one position. So holding torque would be the "overcoming" torque (as above) minus static friction. Of course that can't really go negative -- like if there's no wind and the brake is on.

Not the answer you're looking for? Browse other questions tagged robotic-arm motor manipulator torque or ask your own question.

2
How to decide about the length of a robotic arm, the base of it and the torque?
2
Calculate required motor torque through Harmonic Drive
1
Which kind of motors and how powerfull should they be for a robotic arm
0
How to get Max Torque on Robot arm 's Joints (RRR)
4
How to calculate the max load that owi 535 arm can lift?
4
Using brushless motors for very high torque
0
How to calculate the right needed Power?
0
What is the most accurate method to calculate Torque of 5 DOF Robotic arm
3
Torque required to rotate arm with mass at end

// TODO sg: TMP solution until we are confident in our current implementation of async imports // once we are, we can move the if into the js entry file and dynamically load the mark obsolete module