Difference between Rao-Blackwellized particle filters and regular ones

I'm not really sure about that conclusion, so I would like to know the precise differences between these two types of filters. Thanks in advance.

The Rao-Blackwellized Particle Filter (RBPF) as you say in your question performs a marginalization of the probability distribution of your state space.

The particle filter uses sampling to represent the multivariate probability distribution of your state space. Using samples to represent a distribution is firstly only an approximation, and secondly not very efficient in most cases. The higher the dimension of the state, the more particles you require. One trick introduced by Doucet et al. is to marginalize out a subset of the state space, which can be handled in a more efficient way by using a Gaussian representation.

These figures from my thesis might help to visualize the concept. Let's say you have a joint distribution over $X$ and $Y$ 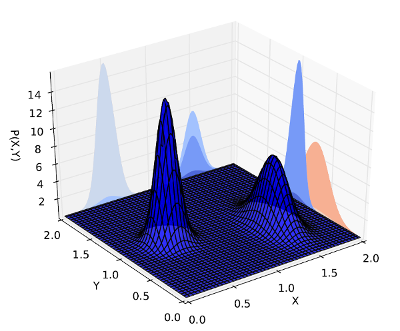 instead of sampling jointly over $X$ and $Y$, we can marginalize $Y$ and represent it as a Gaussian distribution. In this way we just need to sample over $X$, 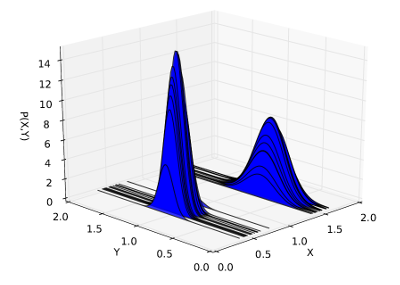 which is much more efficient. Note that each sample now represent a distribution over $Y$.

This marginalization is very popular in SLAM. The reason is that jointly sampling over position and map is impractical. The RBPF idea has been made popular in FastSLAM, realizing that marginalizing the maps from the joint distribution makes the problem tractable. As in the example above, each particle there represents a pose, correspondences and a map. So there is one map per particle.

So the difference between an RBPF and a regular particle filter is that the RBPF samples over a subspace of the probability distribution of the state, and represents the rest using a different statistic. I have another related question on the math background of the Rao-Blackwellization part.

where u is a sample (particle without weight)

28
Particle filters: How to do resampling?
0
Need help regarding EKF in MonoSLAM
7
Difference between SLAM and "3D reconstruction"?
4
Why does the low variance resampling algorithm for particle filters work?
0
Difference between SLAM and Localization
0
2D point cloud registration success probability
0
How do Particle Filters give estimates of uncertainty?