A frame {b} is attached to the centre of a robot chassis. The planar configuration is given by $(x,y,\phi)$ where $\phi$ is the angle between the x axis in {b} and the x axis of a fixed reference frame {s}. 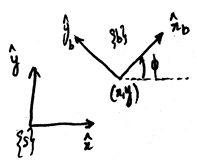 I've seen the same equation in 2 places, both in a 4 mecanum wheeled mobile robot context:

The matrix you have termed the "mapping matrix" is meant to translate between the twist (linear and angular velocity) of the robot and the linear velocity of the centre of each individual wheel, as you have said.

The easiest way to understand what is going on is to note that if the robot is rotating, then the linear velocity of each wheel will be a combination of both the linear velocity of the robot's central frame {b} and its angular velocity about that frame. The purpose of the matrix is to account for both of these contributions based on the relative position of each wheel relative to the central frame.

5
Mobile robot path following using Model Predictive Control (MPC)
3
What kinematic equations should I use for Kalman filter state propagation in IMU based quadcopter navigation?
1
Accessibility distribution of three vector fields
2
How to find the Adjoint matrix of multiple twists
1
Is there a formal name for translating poses into robot states?
2
Explanation for exponential coordinate of rotation
5
Relationship between the velocity twist Jacobian and the spatial velocity Jacobian
0
Transforming between a local and global frame for a Kalman filter
1
Jacobian to determine the linear velocity of each node (DOF 3 RRR robot arm)
2
Equations of motion with mass attached to end effector and external force