What are the different types of electric motors?

I am beginning to learn about the hardware aspect of robotics, and in order for a lot of this new information to be useful to me (whether on this site or elsewhere) I will need a basic understanding of the terminology.

Is there a comprehensive list? Or at least a list of the most common ones, and their descriptions / differences?

There are too much of types to someone describe. I think a simple research will help you.

Reading the other responses I will put something, to put things like they are.

Near any motor can be a servo motor or not. That means a brushed-motor, brush-less motor, stepper-motor (that is a brush-less motor) can be a servo-motor or not. Servo-motors have a feed-back loop to know some variables like the position or speed, or both, and correct according to the signal you put. BUT, that is made by a controller, the motor just has the sensors to provide the signals.

As the name suggests, these motors have a rotating part that is energized (major part is the rotor), and to energize it brushes are used. There's many types of brushed-motors.

Their stator can be of magnets (normally the motor found on toys), or can be coils too (electro-magnets) as the motors found in power-tools. 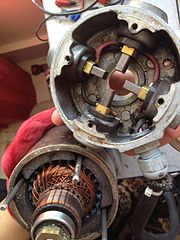 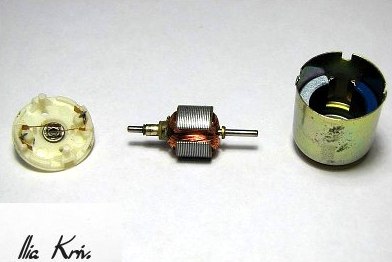 (source: wikimedia.org)
From left to right. Brushes of a small motor, rotor with contact ring and coils, stator and case with magnets

Brush-less motors supply the power to the rotating part of the motor (rotor) by other means.

Induction motors, as the name suggest, supply the power by induction. These motors are the most common in industry, they are very efficient (normally ~90%). As other motors they can have mechanical brake to have fast deceleration and holding breaking. (Ex: cable elevators). 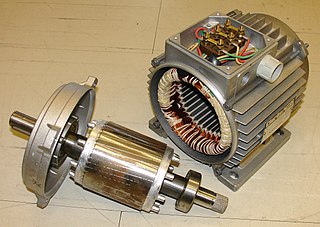 Induction motor partially opened. The rotor, these small cuts in the metal form a low impedance coil, and case with its coils. The fins on the case help to dissipate the generated heat. Depending on the motor it normally have a fan attached to the axle, or use other motor for forced ventilation, for example the motor runs slow.

DC brush-less motors have magnets in their rotor, so no electrical power supply is necessary to the rotor. Normally the magnets have high force to power ratio, see Neodymium magnets for example, and so the rotor1 has low mass and consequently low inertia. That said, it can start and stop at higher rates/accelerations than other motors with less wear.

Stepper-motors are a type of brush-less motor, but with more poles, that means that applying power to the correct phase you can presume the position of the rotor2. But the rotor can slip, called "lose step", and so you lost the position synchronism. That means that if use a stepper motor for precise positioning you need to be sure that the motor can handle the load and not slip. How can you be sure of the position? Put a position sensor on the axle of the motor, this with a controller turns it into a servo-motor.

Stepper motor partially open. This is probably a hybrid type, with the rotor being magnetized and with gear like shape. Some steppers have round rotors, but the rotor is still magnetized with a high number of poles.

As they don't have brushes, normally the only mechanical contact between rotor and stator are the bearings. That why they have low maintenance, high efficiency, nearly no sparks3.

1 - the rotor refereed can be the inner or outer part of the motor, the part that don't rotate relative to the power supply I would consider the stator.

2 - That can be applied to others motors as well. A DC brush-less non-stepper motor, with 3 poles for example, would give you 120° of precision, but what you do is modulate the power applied to each coil (ex: less power to one more to the other) so that you get the positions between. That is used on some steppers motors to, and is called micro-stepping.

3 - although major times that means spark free, one possible mean of spark is from static energy on the rotor, that sometimes find the bearings as the short circuit to discharge, resulting in wear to the bearing, but that in not so common and have some means of counter-measure.

This is only a small list of electrical motors types.

Note: You called that gearing but it's not the only way to do it. I will refer to mechanical transmission

That is other topic. Motors run efficiently and have more torque at certain rotations, so you put for example a reducing transmission and get less speed and more torque. Suppose a motor spin at 4000 RPM and have a 0.1Kg-cm of torque, assuming a reduction of 100:1 (that is 100 turn in the input result in 1 turn at the output) you should get 400 RPM and 1Kg-cm of torque.1

1 - This is a theoretical example, the transmissions are not 100% efficiently so you lose some power

Some types of transmissions that can have different ratios

Gears, Hydraulics, chain sprocket, belts. There's more of course, and each of that have their subtypes. Ex: Gear reductions can be worm-gear, planetary, etc. On some applications you can use pulleys, like cranes, elevators.

Not the answer you're looking for? Browse other questions tagged motor or ask your own question.

3
Once you understand motors, what's the next step?

57
Why are capacitors added to motors (in parallel); what is their purpose?
1
How can a load be balanced between multiple AC electric drive motors?
6
What is the difference between RC motors for cars and helicopters?
4
What is the purpose of electronic braking in motors?
2
Nano sized electric motors
2
Building a quadcopter, what motors, props and what are the calculations?
2
Steering using different speeds in DC motors or using a servo?
0
What types of motor should I use for a particular application?
4
What types of actuators do these industrial bots use?