I have implemented the pure pursuit algorithm for my differential wheeled robot as described in the following paper:

I want the robot to have a constant linear velocity V (say of 0.5m/s) but I am unsure of how I'd go about finding the angular velocity ω using this calculated steering angle.

I wish to plug the angular and linear velocity into the following inverse kinematics formuala for a differential wheeled robot as shown in the figure below. 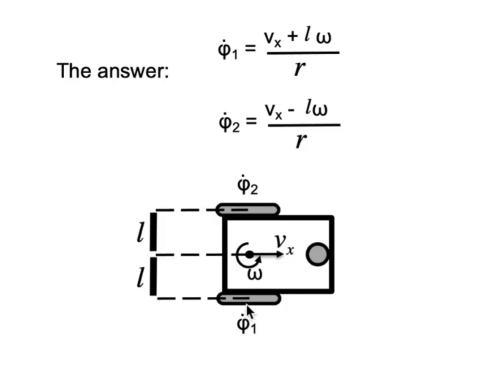 Where the formulas are described in section 3.2.2 'Introduction to Autonomous Mobile Robots' found here:

I'm unsure of what I need to do to translate the steering angle into a form where it can be input into the formula described above for each of the wheel speeds. I'm sure there is a simple solution but I am lost as to the next steps to take

You can set the angular velocity to whatever you want, that's the control input and depends on the algorithm. You have to set it to be something proportional to the difference in the desired angle (from the intercept trajectory) and the actual angle as measured. You then update the desired angle and velocity and re-calculate.

Which will show you how to derive angular velocity as a function of desired heading / speed to a fixed point. Then note that in the paper you linked, they do the same, calculating a velocity that converges to a "look ahead" point.

Not the answer you're looking for? Browse other questions tagged mobile-robot control kinematics inverse-kinematics differential-drive or ask your own question.