Center of Mass of a Box

If I have the following area-split box: 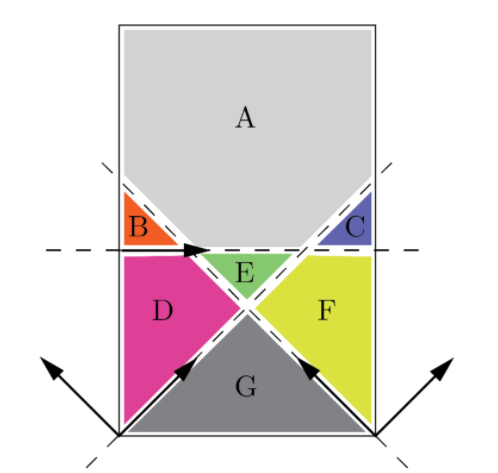 During quasistatic pushing, the contact forces acting on the box, from the pushing finger and the table, must balance the downward gravity force. If the contact mode is SrSr (the box slides to the right without tipping) as the finger moves to the right, in which areas might the center of mass be?

This is for a course I'm taking now, and I have tried every possible answer and it didn't work.

Nothing in the problem statement quantifies the coefficient of friction, so we'll have to carry it around symbolically. We might have to do the same with the finger height.

We will compute the forces and torques that resist tipping and sliding. If tipping occurs, the rectangle will rotate about the bottom-right corner, so we'll put the origin there.

The force $F$ pushing from the left (between area B and area D) is equivalent to a force pulling at the right (between area C and area F). Operating at height $h$, that applies a torque of $F h$.

Consider the weight $W$ to be concentrated at the center of mass $C$ (that is, at $(X,Y)$). It's trying to rotate the rectangle counter-clockwise about $O$. The downward weight vector operates about $O$ with moment arm $X$. So the torque due to weight is $W X$.

The box will tip (if it doesn't slide) if the torque at $O$ due to the finger exceeds the torque due to gravity $F h > W X$. Call the limiting tipping force $F_{tip}$:

Now examine the friction at the table. The max friction force is $W \mu$, pushing horizontally to the left (countering the finger). It cannot exert any torque at $O$. Thus the box will slide (if it doesn't tip) when the finger force exceeds the friction. Call the limiting force $F_{slide}$:

Imagine the finger gradually pushing harder and harder. At first, nothing happens. Eventually, the box will start to move. It will either tip or slide, depending on which of $F_{tip}$ or $F_{slide}$ is reached first -- that is, which one is less. In comparing the two forces, both have a factor of $W$ which we can divide out. So comparing $X/h$ with $\mu$:

We can sanity-check this by looking at limiting cases. High friction (high $\mu$) means $X$ can't be large enough so it will tip. With no friction (zero $\mu$) any $X$ will let it slide. If $X=0$ ($C$ anywhere on the right edge) it will always tip.

Restated, the box will slide if $C$ is to the left of $h \mu$. The boundary between the tip region and the slide region will be vertical. (It is curious, perhaps suspicious, that the results do not depend on $Y$, the height of point $C$.)

Recall that the problem statement doesn't specify anything about $\mu$. Neither does it say those angles that look like 45 degrees really are, so we can't relate $h$ to the width. Without that critical information, I don't see any way to connect analysis to geometry in order to answer the question about the regions.

Not the answer you're looking for? Browse other questions tagged force or ask your own question.